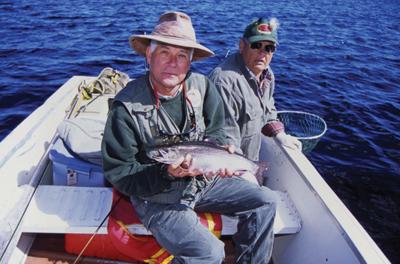 Maybe it’s the pike picking off only the weakest fish or the chub providing abundant year-round protein. Or perhaps it’s the incredible fly hatches or the superior genetics of the fish themselves. Whichever is the case, most of the International Game Fish Association fly rod records for brook trout come from the lakes and rivers of the Minipi Watershed. No doubt contributing to this great fishery is the low fishing pressure—there are just four lodges in the entire area catering to a select handful of anglers each season. Operating since 1979, Coopers’ Minipi Lodges further protects the fairly shallow lake and river system by adhering to a strict catch-and-release regimen. Plus, it’s fly fishing only. I’ve been lucky enough to visit Minipi three times and the fishing has been consistently great. But don’t just take my word for it. The lodges’ logbooks speak volumes about the quality of the fishery. To earn a mention, the trout must weigh at least three pounds, but most of the recorded fish tip the scales at more than four, including a good number of seven-pound-plus catches. Maintaining a fishery such as this takes dedication. For example, it’s the only place I’ve been gently nudged by my guide to land my trophy a little more quickly. Indeed, all the Minipi guides treat the watershed’s lunker brook trout like fragile crystal. And so they should.

When to fish: All season.

Where to fish: Narrows, rivers and rivermouths.