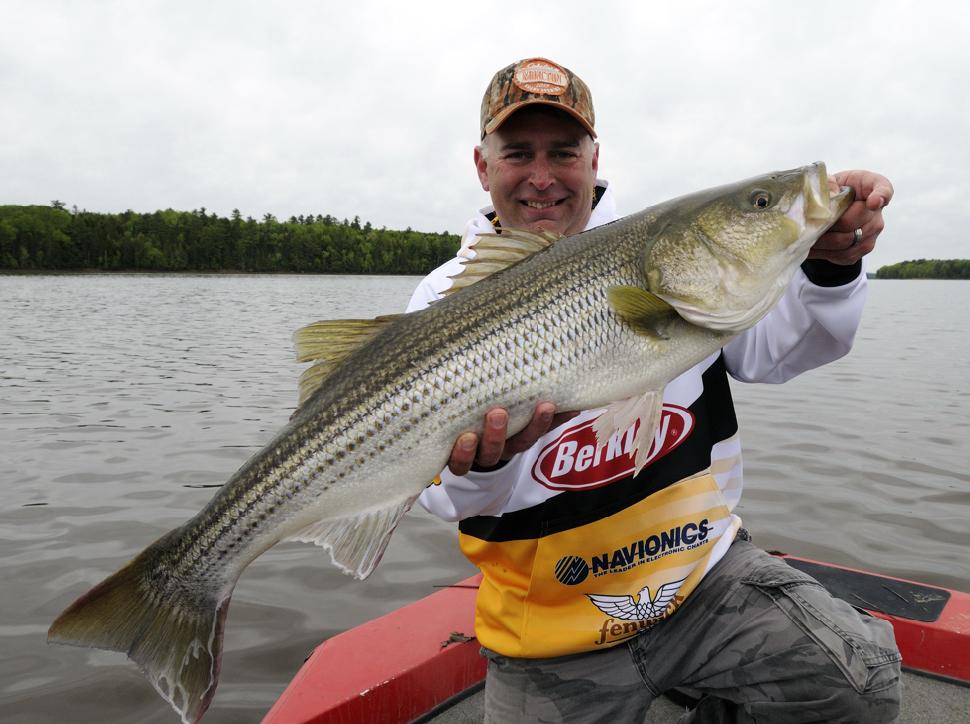 More than 240 fish caught and released in one day

The one thing an outdoor writer is never supposed to experience is a loss for words – but that is what I am facing.

Honest truth, no matter how many superlatives I use, no matter how much I appear to exaggerate, I can’t do justice to the striped bass fishing I experienced last week on the Miramichi River in New Brunswick.

It was incredible, amazing, astonishing, mind boggling.  The single best day, from a fish numbers perspective, that I’ve ever experienced.

The reason we know how many fish we landed is that Jason had a clicker around his neck to record the numbers, but he stopped counting well before noon when we reached the 75 fish mark, because when I’d catch a fish and he would stop reeling in his lure to punch the clicker, a striper would nearly rip the rod out his hands.

A couple of other times, we set the stop watch for ten minutes to see how many stripers we could haul over the gunnels and averaged eight, or nearly one a minute.  And we’re talking about fish that averaged four to six pounds with scores of 8-, 10- and 12-pound fish.

And the striper schools we spotted, swirling on the surface, feeding like piranhas, were unlike anything I have ever seen before.  Here is a very short video of two of those striper schools, but when you click on the link and watch it, listen to Jason and I.  There are so many fish bursting and feeding on the surface that we’re delirious and can’t stop laughing.  Just for fun, too, count how many times Jason says, “Oh, my god, I hope I am recording this”.

Something else you’ll not believe – the water where we’re fishing is only a few feet deep.  Literally, three, four, five feet deep.  So, there is no possible way you can throw out a lure and not have the fish see it and attack it.

Jason nabbed a magnificent 20-pound striper – our biggest of the day – but I had a giant striper savagely strike and immediately take off for Moncton when I set the hook.  I’ve caught muskies up to 57 1/2 pounds and they didn’t streak away, pull drag and tear off like this fish did, so I have no idea how much it weighed.  But I am guessing in the 30-, 40-, maybe even 50-pound range.

And talk about a success story.

In the 1980s and 90s the striped bass fishery along the east coast was on its last legs due to commercial and sportfish overharvesting.  But smart, modern, conservation regulations were put in place including the use of single barbless hooks, a tight one-fish per day slot limit and a catch-and-release only season and the fish have not only bounced back, they’ve returned with a vengeance.

The only unfortunate part of the story is that the best fishing lasts for only about a month in the spring – from roughly mid-May to mid-June – which means that if you are anywhere near the Miramichi River over the next week or two, drop everything on your agenda and wet a line for stripers.

Trust me, while you may find yourself at a loss for words at the end of the day, you will not be disappointed.