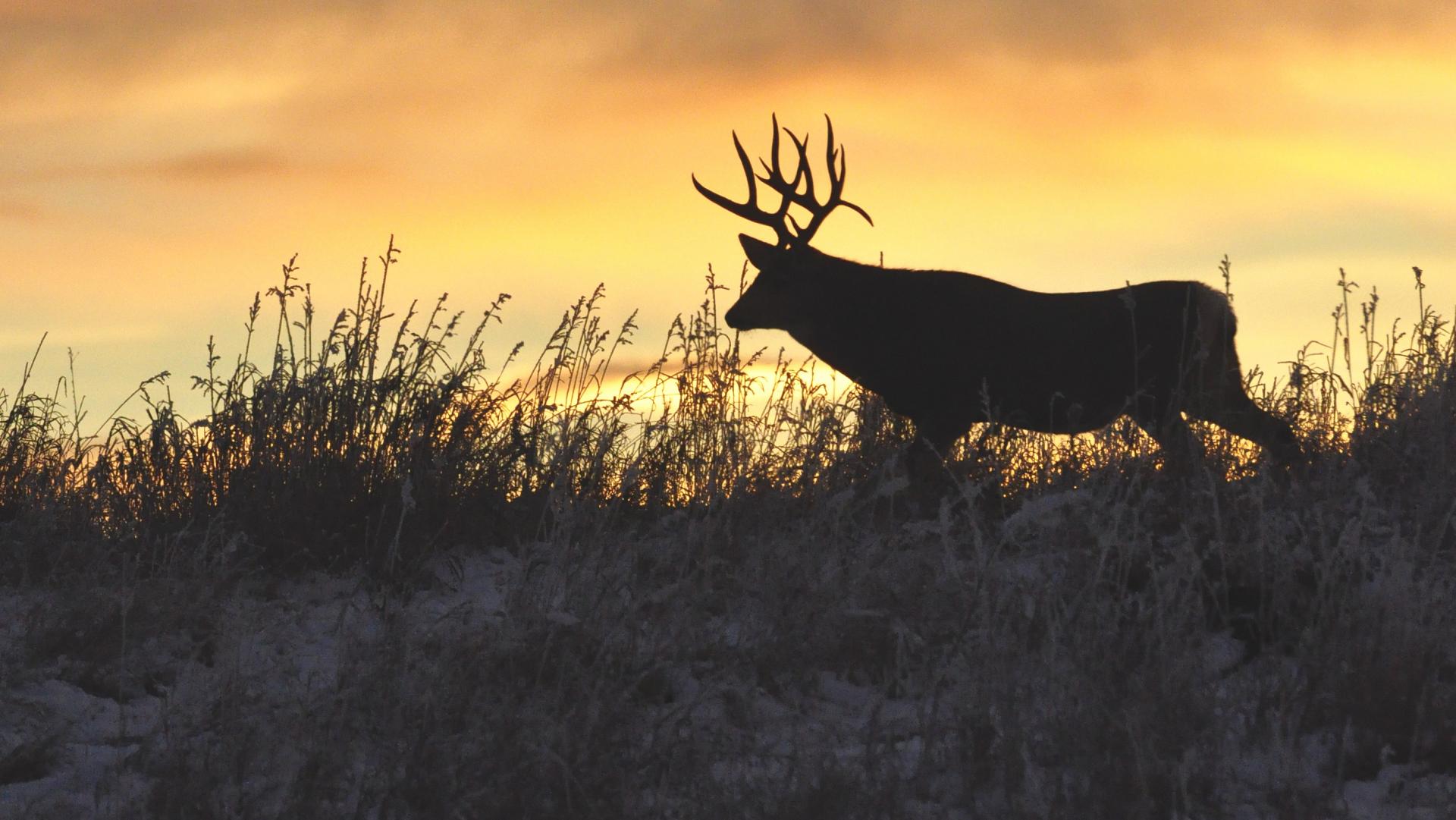 For taking a trophy mule deer, follow these tactics for heading afield with either a bow or a rifle

Growing up on the prairies, I was lucky to be surrounded by fabulous mule deer country. Maybe that’s partially why I’ve always been such a mulie fanatic. It’s certainly not because they’re easy to hunt—a big, mature mule deer buck is about as cagey as an animal gets. As far as I’m concerned, it’s tougher to harvest a Boone and Crockett mule deer than a whitetail in Western Canada. One look at the B&C record books bears that out.

One reason for this is that it can take years to get drawn for a coveted rifle tag. Fortunately, though, many areas in the West also have general archery seasons, so it only makes sense to be at the ready to take advantage of every possible opportunity. And that means knowing how to hunt mule deer with both a bow and a rifle.

Mule deer live a large portion of their lives in wide open terrain, so being able to shoot your bow at long ranges can really give you an edge. Push your limit to become as comfortable as possible with long bombs, and try to get your archery gear dialed in to shoot up to 100 yards. Today’s new bows are lightning fast, and have no problem effectively shooting that far. At those longer distances, however, it’s even more important to make sure your shot counts, and that requires a lot of practice. If you plan to get out with your bow for mule deer, then, make sure you keep your skills sharp during the off-season.

Ideally, start scouring the countryside for potential hunting hot spots in the early summer months. That’s when bruiser bucks are travelling in bachelor herds, feeling untouchable with next to no pressure. You’ll spot them out in the open fields, gorging on ripening crops—they’re particularly suckers for alfalfa, canola, lentils, oats and peas.

Mule deer move about the most at dawn and dusk, travelling from their bedding areas to their feeding grounds. Spend your time scouting these prime times and your searching will pay off. Glass until your eyeballs feel as if they’re going to pop out of your head. Then glass some more.

Once the harvest begins, the deer patterns start to change, with the big bucks getting bounced around from one field to the next. That makes it tougher later in the archery season, so pay close attention to where the deer are coming from and going to at first and last light, as you may have to change your strategies accordingly. A cagey old mulie will go from feeding in crop fields to foraging in pasture lands, not only making him tougher to find, but also harder to get close to without spooking him.

All of today’s archery companies make very fast, accurate bows. I shoot a Bowtech and have it dialed in with a Spot Hogg sight. You’ll also need a rangefinder, an amazing tool that takes the guesswork out of the equation and makes bowhunting more effective than ever. As well, I use binoculars with a built-in rangefinder, making for one less piece of equipment I have to carry.

Good camouflage clothing, meanwhile, is essential when stalking, but make sure the fabric is silent. Trying to sneak up on a mule deer buck with noisy camo is pointless, as those big ears will hear you coming from a kilometre away.

The early archery season can be one of the best times to harvest giant mulie bucks, as they’re still in their late-summer routines, feeding heavily in crop fields and staying out in the open. I’ve had some of my best luck watching a big buck feed, then staying on him until he beds down. That’s when I begin my stalk.

Cover is key, as is a favourable wind. If the deer is in a crop field, the wind can help you get in close enough for a good shot by masking the sound of your stalk. If you don’t have a breeze, wait until you do. And once you begin your stalk, go slowly and very carefully, or you’ll bust the buck clear out of the county.

There have been times when I was down to the wire on the last afternoon of bow season, and left with no choice but to try to close the distance without so much as a tumbleweed for cover. I once belly-crawled for three hours down a ravine, for example, to close the gap on a giant non-typical buck that was bedded down. I took my time and got to within 50 metres of the buck, but when he finally stood up, I took the shot and missed. That’s hunting—not every stalk is going to be successful. You just have to learn from your mistakes.

The most important thing with bowhunting is to have patience and never rush the shot once you’re in range. Keep your cool and everything should fall into place. You’re better off watching and waiting than blowing your opportunity and educating a buck. Eventually, any bedded buck will stand up for a stretch or go for a walk. When that happens, wait for him to look away, then draw your bow. Even if he spooks and starts to run away, still draw your bow and be ready. Mulies are curious, and sometimes they just can’t resist stopping to see what spooked them, providing you with a glorious opportunity if you’re at full draw and ready.

As with shooting a bow, spend as much time at the range as you can to build confidence before the season begins. And practise those long-distance shots. In open country, you may be able to use the terrain to close the distance for a shot. But if your only chance at the buck of your dreams is a long shot, there’s nothing more reassuring than having the confidence in not only your firearm, but also your ability. While long-range shooting isn’t a must, you want to be at the ready if it’s your only option.

Rifle seasons generally start in November when mule deer are getting into the early stages of the rut, making for one of the most exciting times to hunt them. When the does start to bunch up, bucks will appear out of the nastiest country you can find, from the deepest coulees to the darkest draws. Watch for spots tucked away far from traffic—places a big buck would feel comfortable in—and glass those areas at dusk and dawn.

The bonus of hunting in November is that the deer will start to congregate in larger groups, making them easier to spot. If you do find a group, but don’t spot a big buck right away, don’t throw in the towel. Instead, scour the surrounding terrain—your dream buck could be lying in a patch of brush taking a little break. And if you find a doe, pay close attention, as bucks likely won’t be too far away.

Choose a flat-shooting rifle—the next time I draw a rifle tag, for example, I’m looking forward to using my new Weatherby Mark V, chambered in the incredibly fast and flat-shooting 6.5-300 Wby. Mag. I prefer to load my own ammunition, always playing with grains and bullets to create that perfect load. My favourite combination is a Berger 115-grain VLD bullet backed by 69 grains of IMR 7828 powder, making for a deadly load.

When you’re deep in mulie country, always pack water, food and warm clothing. You can encounter some nasty weather during rifle season, and there’s nothing worse than freezing your behind off and trying to glass with the shakes. If you plan to hunt in an area that’s only accessible by foot, also be sure to bring a large backpack and everything you need to cape your buck and bone out the meat.

Regardless if I’m hunting with a bow or a rifle, I like spotting-and-stalking the most. For me, it’s the most exciting and rewarding way to hunt. Once I spot a buck worth taking, I stay on him until he beds down, then stalk in close enough to make a great shot when he eventually stands up. Some hunters will shoot a bedded buck, but I like waiting for him to stand so I can get a better look at his vitals and make the perfect shot.

Some old-school hunters will tell you the secret to flushing out mulies is to push a big rock down the side of a bush-choked coulee. Although it can be an effective technique, it’s next to impossible to judge the size of a terrified buck fleeing at warp speed—they all look big from behind. Plus, it’s very difficult to make a clean shot at a bounding buck. My advice: Don’t try it. Instead, find the highest vantage point around and glass your heart out. Hunt hard and you will be rewarded.