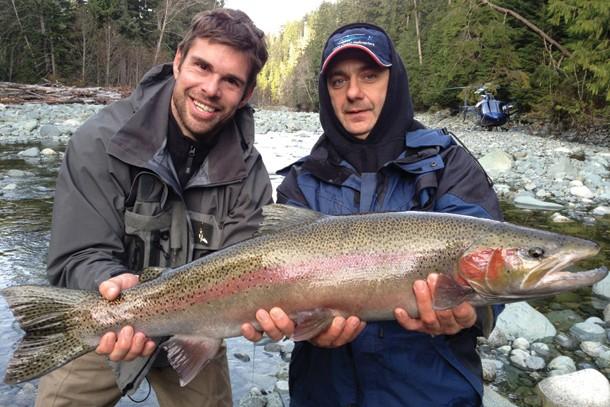 When: First two weeks of August.

Where: Stay at historic Telegraph Cove, but I’m not telling you where to fish.

How: Mooch or troll cutplug herring off downriggers with a dummy flasher off the cannonball.

Why: The chance to catch a tyee (30-pound or bigger chinook) at one of the oldest fishing clubs in the world.

How: Row yourself, or have someone row you, into a tyee while holding your rod. Spoons and plugs are the ticket.

When: April to October.

Where: For coho, fish large, deep pools; for steelhead, fish tail-outs, behind boulders and walking-speed water. For fresh summer-run fish, use dry flies for the ultimate take.

Why: The chance to catch a dinosaur white sturgeon.

When: Late August to October.

Where: Fish holes on the river bottom where the sturgeon lie.

How: Use the freshest roe you can and remember, the stinkier the bait, the better.

Why: Every chinook salmon passes by here. Bonus: giant halibut.

When: Late May to early September.

Where: Guinea Point for the hog chinook.

How: Mooch cutplug herring as slowly as possible; fish back eddies and the flood tide when the fish are moving and more active.

Why: Lots of steelhead and rainbow trout.

When: January and February.

Where: The many great river systems.

How: 8-weight spey rods on larger river systems and centre pin on smaller rivers with lots of brush.

Why: Just a 20-minute flight from Vancouver; world-class fishing for Pacific salmon, bull trout and steelhead.

When: Early June for sea-run bull trout and August to September for all types of salmon and bull trout.

Where: Fish the seams for bull trout just as you would for steelhead; avoid muddy water, but not fast water.

How: Use a spey or fly rod to cast flies with lots of flash.

Why: Arguably the strongest steelhead in the world.

When: November until the end of December is best, but you have to watch the regs for updates (the river is sometimes closed on October 1, depending on the quality of the run).

Where: The Spences Bridge area; before and after the rapids are good bets because the fish will rest there before moving up. Look for large nuggets in the river that the fish will sit behind.

How: Best to use spey or fly rods, or centre-pin reels with roe and shrimp. You’ll need a float boat to get to low-pressure fishing spots.