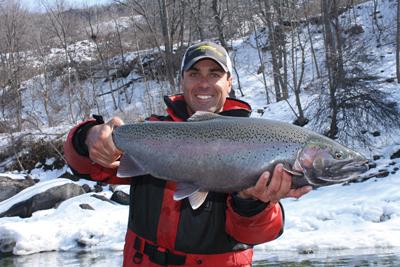 Connecting Lakes Erie and Ontario, Niagara is world famous—but not for its fishing. We’ve tried hard to change that over the years, however. Short, wide and awesomely powerful, it’s the kind of water that grows big, strong fish. Above the falls, the prizes include football-sized rainbows and bass, and truly massive muskies. Below, huge runs of steelhead begin in October and are catchable until June, with good fishing from shore as well as from boats.

In 2011, Best for inland steelhead

One of the natural wonders of the world, Niagara Falls has exerted a magnetic pull on tourists and honeymooners alike for generations. But for hard-bitten steelhead junkies, it’s not the falls that sets hearts a-pounding, but the river itself flowing through the Niagara Gorge. Here, in the 11-kilometre stretch of roiling river leading from the Horseshoe Falls to the Queenston-Lewiston Bridge, lies arguably the best non-coastal steelhead fishery in North America.

What makes the lower Niagara River so special? Well, there are the huge runs of steelhead migrating upriver from Lake Ontario, cold-water torpedoes averaging more than six pounds, routinely hitting 15 to 18 pounds, and sometimes reaching 24 pounds or more. The real draw, however, the thing that sets the Niagara apart from other steelhead rivers, is the fact that once the season starts in October, the fishing stays strong, day in and day out, until June. That’s because the river is so massive—hundreds of metres wide and 45 metres deep in places—it’s relatively unaffected by excessive rain or drought, the same conditions that can kill the fishing on smaller rivers.

One word of caution, though: The Niagara River below Horseshoe Falls is heavy water that demands respect. First-time anglers should consider hiring a guide who knows the area and its attendant dangers. And, of course, knows just where the fish are lying.

When to fish: November through April.

Where to fish: Work the fast-moving Artpark Drift in November and December, and slower-moving drifts, such as the Queenston Back Drift, into the spring.

In 2008, Steelhead; Numbers of good-sized fish

When to fish: December through March.

Where to fish: Current breaks and eddies.

When to fish: January through March.

Where to fish: Current-facing slopes of humps and sandbars.

Tip: Use a drop-shot or three-way rig tipped with a smelt pattern soft-plastic bait such as the Wave Worm Tiki-Shadick in smoke.

When to fish: November.

Where to fish: Riverbends and current breaks.