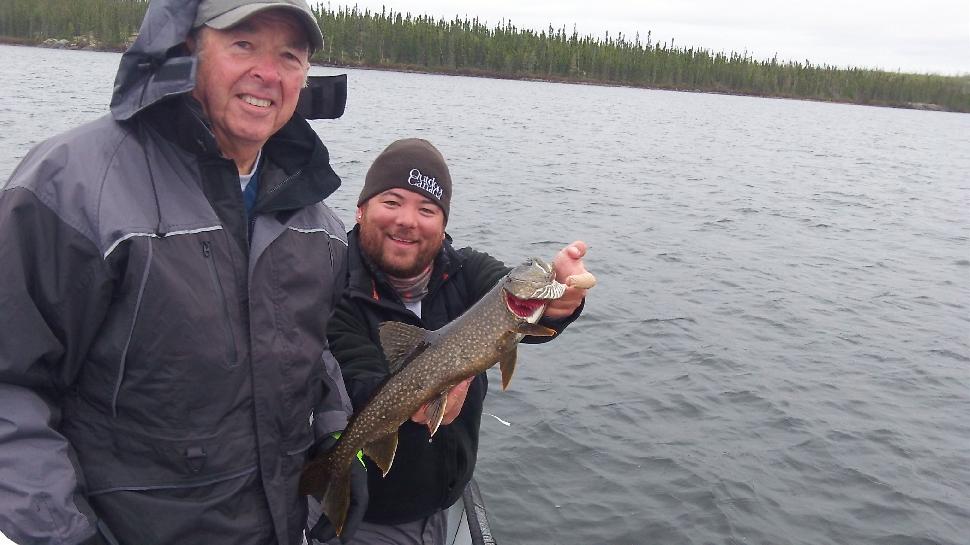 My dad, Bud Walsh, and I arrived late yesterday afternoon at northern Saskatchewan’s Milton Lake Lodge. His first impression? “Geez it’s a long way to come!” Laugh. Too true, though: an Air Canada strike-harried flight from Toronto to Saskatoon; one or two too many pints while cooling our heels in Toon town waiting for the West Wind Aviation connector to Points North Landing; the 95-minute flight on a Beech 1900c to Points North; and, finally, the 40-minute Beaver ride into Milton.

So, where is Milton exactly? Just 40 kilometres south of the N.W.T. border along the 60th parallel. Click here for the precise location.

Yes, it’s a long way to come, but well worth it to experience the boreal taiga wilderness, and have the opportunity to catch piles of untouched truly wild lake trout and northern pike. Dad’s digging it, I can tell. Today, we punched a bunch of lakers in the morning; there was nothing giant, but we had good fun (that’s Dad’s first fish in the photo; and yes, they got bigger). It was the same story for the afternoon following a tasty shorelunch of freshly caught fish, but after switching to northerns.

We were thinking of heading down to the shoreline now that we’ve finished yet another huge, rich, delicious dinner (steak tonight), but dad is now suggesting bed may be a better option. Heck, he would have been happy to head back to the lodge after the morning lake trout. As he said at the time: “We caught fish. I’m happy.”

Well, I’m pretty sure he’s going to be even happier tomorrow. The cold front has moved off, the low ceiling has broken and the blue sky has arrived. The weather forecast through to Monday is low 20s, variable cloudiness and 15 kilometre winds from the east. No more cold rain, like we had this morning. And lots more fish. I can pretty much guarantee it.

All we need to do now is work on size, and with my old buddy Naoto Aoki as our guide (that’s him with Dad in the photo), I’m pretty confident dad will have a few trophy stories to take home with him after three more days of fishing. I know I had plenty of trophy tales after I first visited here in 2005. And with the lodge only now reopened after a two-year hiatus (we’re with the second group of anglers since it reopened), this is decidedly one unpressured fishery. Sweet.

Dad has hit the hay now. As for me, well, I think I’ll stick with Plan A, grab my fly rod and head for the shoreline…