Drop a line, and you never know what you'll haul up

Every spring, the golf courses, outlet malls and family-friendly attractions of Myrtle Beach, S.C. draw thousands of Canadian visitors. But not many know there’s also good fishing, right in the city from a number of fishing piers. Even better, you can simply use your tackle from home, and little local bait. 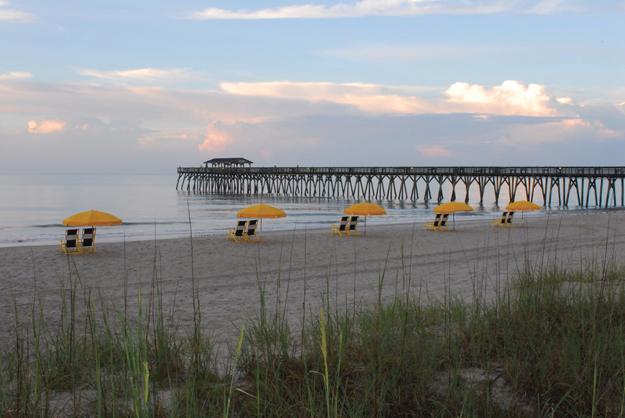 Every spring, the golf courses, outlet malls and family-friendly attractions of Myrtle Beach, S.C. draw thousands of Canadian visitors. But not many know there’s also good fishing, right in the city. Myrtle Beach has eight fishing piers with hot action, especially from March through to November. Almost unknown in Canada, pier fishing is popular along the entire Atlantic coast from New England to Texas. These substantial structures stretch several hundred metres out into the surf, giving access to deep water. Additionally, the pilings form little ecosystems, attracting everything from baitfish to top predators, including sharks and king mackerel. And even novices can get a few fish, as you’ll see. 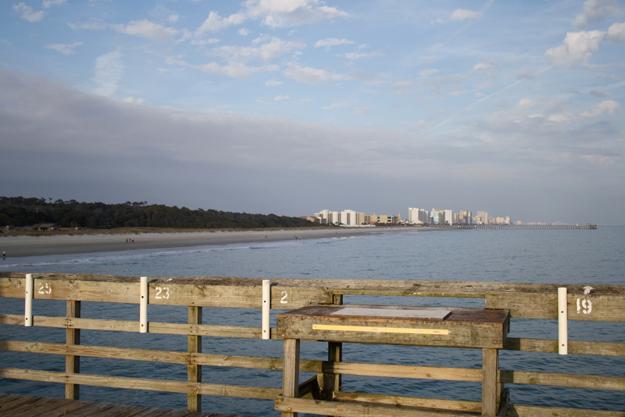 We fished the pier in Myrtle Beach State Park, a little oasis of nature along the heavily developed Grand Strand (as the Carolinas’ 100-kilometre stretch of unbroken beach is known). Like most piers, the Park charges a couple of bucks to fish, and there’s a shop with tackle, bait, snacks and souvenirs. You can also rent rods, but we brought our own—a couple of medium-action spinning outfits with 20-pound braid. This pier had some rather luxurious touches, including rod holders, cleaning tables (always a promising sign), lights and numbered spaces for the really busy seasons. 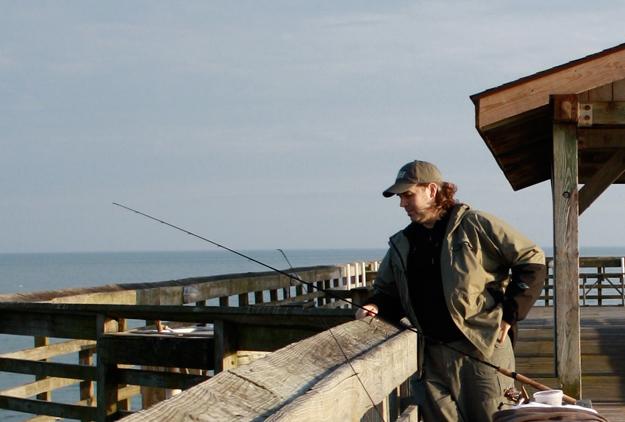 Hardcore pier anglers going after big game have some pretty elaborate set-ups, including double-rod casting systems and balloon floats to get large baits far from shore, but most folks keep it simple. Before arriving, I chatted with a park ranger who told me that in December and January the main target species was southern kingfish, known locally as whiting. These guys average about half a pound, so he recommended simple spreader and dropper rigs with small hooks, and chunks of shrimp for bait. His advice was right on the money. 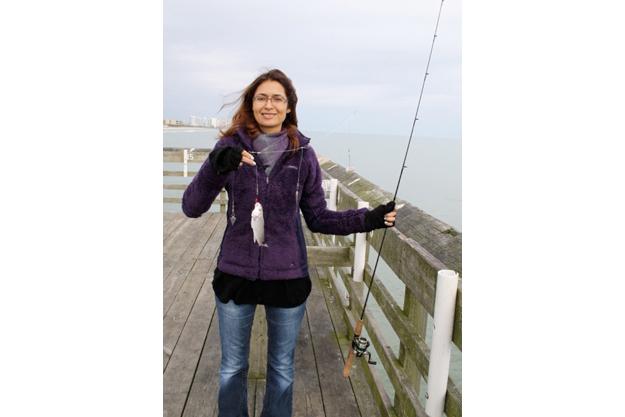 Only a few minutes after dropping her line in the water, my girlfriend Julie Blair caught her first Atlantic croaker. They can get as big as three or four pounds, but Julie’s six-incher was more typical. These pretty little fish get their name from the surprisingly loud croaking sound they produce using their swim bladders. You can feel its sides pulse with every croak. The bigger ones are good eating, but all of ours—Julie, in particular, seemed able to catch them pretty much at will—went back into the sea. 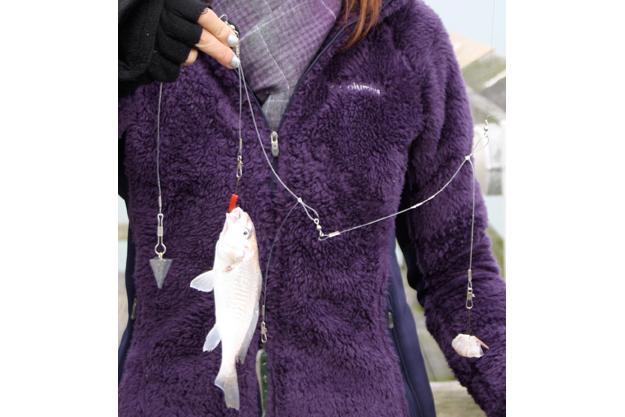 In this close up, you can see the three-hook dropper rig and two-ounce pyramid sinker — a classic pier fishing set-up that costs about $1.50. Along with chunks of shrimp we tried Berkley Gulp! bloodworms and minnows, which also worked. The Gulp! also stayed on the hook better than our mushy frozen shrimp. This was quite helpful, considering that for every fish we landed, we probably had two or three fish (or crabs!) steal our bait. 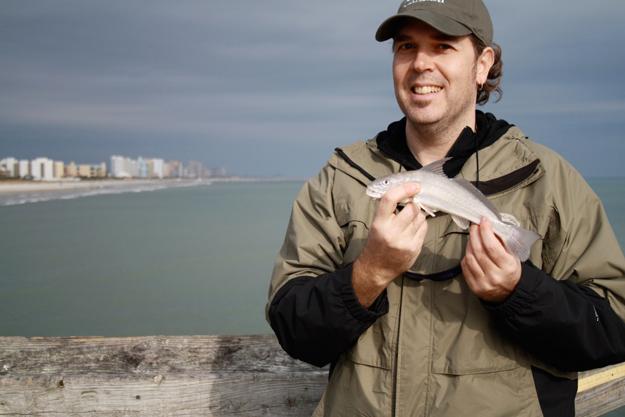 When pier fishing is hot, anglers take redfish, (saltwater) sheepshead, seatrout and whiting by the bucket load. However in winter, it’s a little slow, so we were pleased with a few whiting. Small and plentiful, whiting reminded me of yellow perch from home… because they’re also tasty. They were a delicious little addition to the inshore fish we caught the day before. And then something really cool happened… 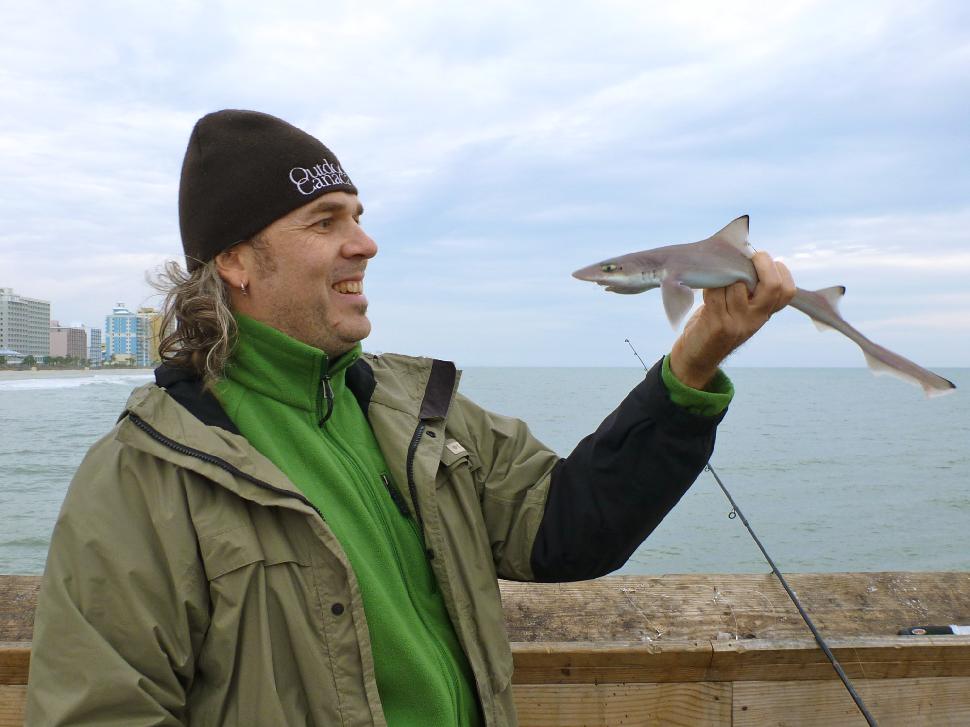 Not only is pier fishing easy to do with the most basic tackle and baits, you never know what will show up. So for me, the high point of the day was this adorable little sand shark, that showed up late in the day. He was a perfect miniature version of the full-sized man-eaters, and just amazingly strong on the line.

Even if we hadn’t nabbed a few fish (including that awesome little shark), our afternoon on the pier would have been worth it for the fresh air, sea breeze and plentiful dolphins. If you go: Myrtle Beach Sate Park, Myrtle Beach Visitors Bureau.