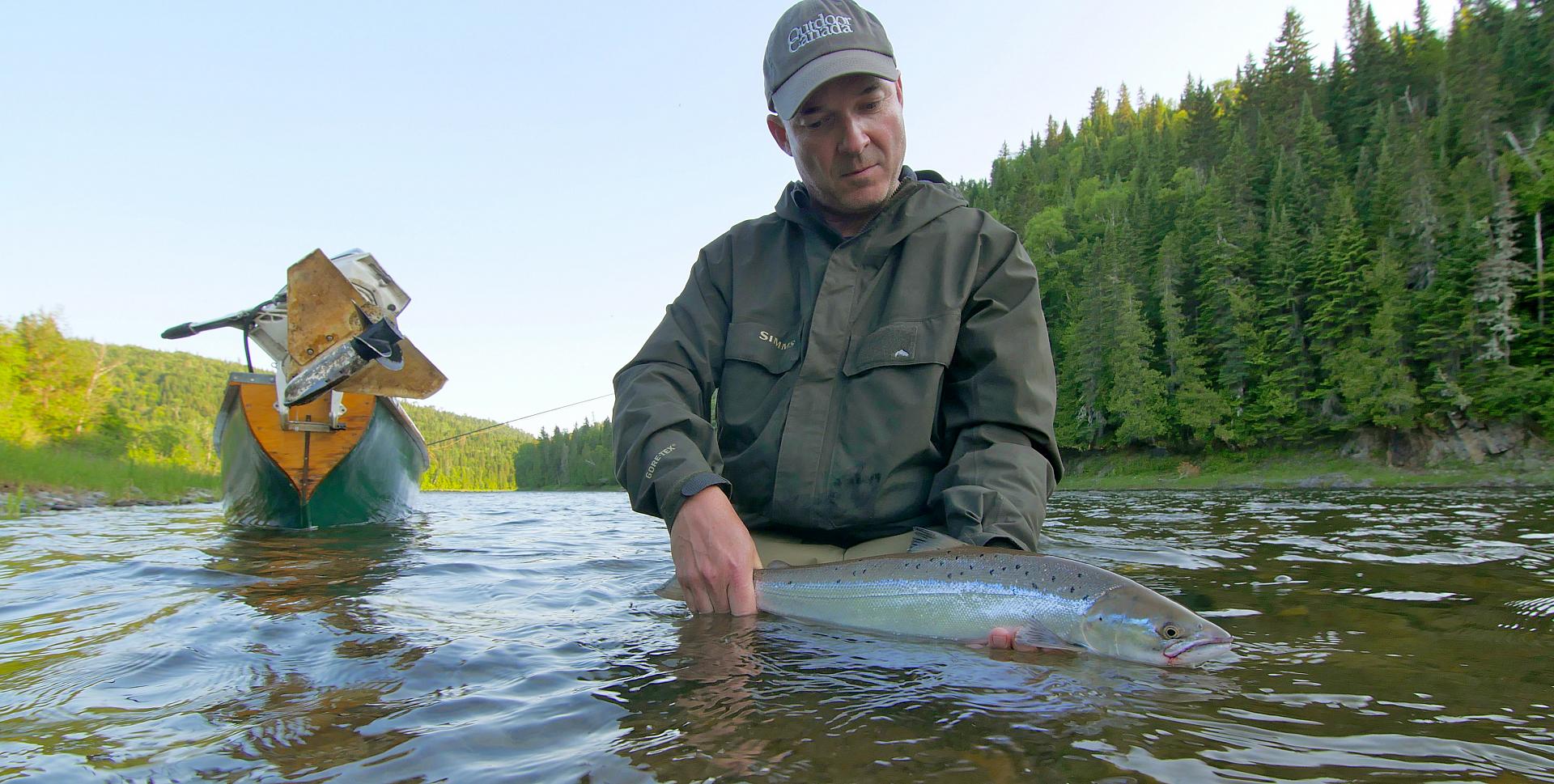 One Canadian angler’s quest to catch a wild Atlantic salmon

Redemption on the Restigouche

These days, fly fishing for Atlantic salmon is all about the tradition, not actually catching fish. Or so they say. One angler’s quest to actually land a leaper

To say I deserved my fish is an understatement. At least that’s what I told myself as I brought my first-ever Atlantic salmon to hand, popped free the barbless hook and marvelled at its silver flank and trademark spots. Deserved indeed. Since arriving on the Restigouche the previous evening, after all, I’d spent a grand total of eight hours soaking flies without so much as a sniff from the vaunted New Brunswick river’s Atlantics.

It’s not that I was fully expecting to catch a fish, mind you. I know you can’t connect with these salmon the way anglers of yore did, counting both numbers and sizes, and feasting on the fine red flesh. That’s what I had been told, anyway, before heading down East late last June, intent on scratching Atlantics off my angling bucket list. As those in the know had warned me, I shouldn’t expect to even see a fish. But there’s a fine line between expect and want, and I really, really wanted to bring one of these magnificent fish to hand.

Of course, the salmon cognoscenti were correct: I shouldn’t have had expectations of catching a fish, let alone more than one. And fuelling that blunt assessment is the unfortunate matter of reality.

As with the equally renowned Miramichi and other salmon rivers of the southern Gulf of St. Lawrence, the Restigouche’s salmon runs are at historic lows, with the fish themselves flagged as being of “special concern” by the Committee on the Status of Endangered Wildlife in Canada. That’s essentially one step away from being labelled as threatened, which explains why fishing for Atlantics in New Brunswick is now strictly catch-and-release—and with single barbless hooks, at that.

But here’s the thing: You can indeed still catch them the way they used to. Okay, I’m not talking numbers here, although fish in the 40-pound range are still caught each year. Rather, it’s all about tradition—old-timey Atlantic salmon fishing, from a square-stern canoe, held in place by a seasoned guide while you meticulously cover the water with your fly rod. In my case, it was a 26-foot Sharpe canoe equipped with an old 15-horse Johnson for powering upstream and down to reach any of the nine pools along Glen Eden Salmon Lodge’s 1.6-kilometre stretch of river.

To have the opportunity to even wet a line on a blue-ribbon river such as the Restigouche was certainly honour enough, and to fly fish for leapers in the traditional manner from a canoe definitely added to the experience. For some anglers, that would be enough, fish or no fish. But as I said, I was on a mission, reality notwithstanding, to catch one of these fabled fish.

Fishing with me was Toronto video producer and pal Nick Pujic, with guide Vaughn Firth at the helm of our canoe. For three days, Nick and I took turns quartering sets of casts downstream, letting the fly swing in before stripping it back and repeating the process on the opposite side of the canoe, each time adding a few yards to the cast. In all, we’d make about 10 casts per turn before Vaughn would pull up the anchor and we’d drift downstream a few metres for the other guy to take a shot at connecting. So goes the drill when you’re fishing for Atlantics the traditional way, with the day broken into morning and evening sessions on the water to give the fish a chance to rest in between.

Our first outing on the river began at 7 p.m., shortly after we arrived at the lodge, and it didn’t take long for Nick and me to get in the rhythm of things. Just being on the river, with lush, towering forests rising from either bank, was a great way to cap off a day of travel from Toronto. That included a four-hour drive from the airport in Fredericton through the bucolic heart of New Brunswick, ending with a 22-kilometre jaunt down a gravel road to the Restigouche, where it forms the province’s northern border with Quebec.

Along with Nick and me, there were eight others at the lodge, including the five-man crew from Hooké, a hip young Quebec outfit specializing in angling apparel and fishing films. Of the entire group, the Hooké boys were the most intent on catching a salmon, under pressure as they were to produce a fish for their latest video project.

Nick was also capturing footage, along with fellow videographer, fly fisherman and friend Yoshi Aoki, who spent his angling time wading the river. Joining him was spey rod-wielding Serge Collin, our host and the media travel rep from Tourism New Brunswick. And rounding out the guest list was famed Atlantic salmon fly tier Jacques Héroux, who graciously kept Nick and me supplied with Rusty Rats, Blue Charms and Green Widows.

For much of the Restigouche, private clubs hold riparian rights to exclusive stretches of water, all but putting the river off-limits to the average Joe. But 96-year-old Glen Eden, recently rescued from the clutches of corporate Canada, aims to remedy that, giving salmon-starved anglers such as me the chance to fish like a millionaire. Having now opened its doors to the fishing public, the lodge is certainly a rarity on these rarefied waters (see “The people’s fish camp” below).

No doubt your odds of actually catching an Atlantic improve measurably if you have a knowledgeable guide in your corner, someone who’s fished and watched the river for years, decades even. Lucky for us, we had just that in Vaughn. He’s been guiding at Glen Eden since 1999, and before that, he put guests on fish just downriver for 15 years at Restigouche River Lodge. These days, he pulls double-duty at Glen Eden as lodge manager.

And put us on the fish he did—so much so that we could sometimes even see the Atlantics hovering in the current, betrayed by the gin-clear water. It’s not as though that made it easier to catch the beasts, mind you. Which brings us back to my eight hours of casting before finally connecting.

That happened during the afternoon session on our second day, when a 3½-pound grilse fell for one of Jacques’ Blue Charms. It was, at that moment, as Glen Eden’s website promises, the best place on earth to fish—and for me, an even better place to actually catch a fish. That was at the Princess Pool, and before we moved on after further saturating the water with casts, I also caught a sea-run brook trout. So much for not catching fish.

I’m more than happy to also report that I wasn’t the only person in camp to feel a fish. Nick also caught a grilse, a four-pounder at Sharp’s Pool, along with a sea-run brookie. And Serge landed his personal best Atlantic, a magnificent 25-pound hen he tricked with a Green Widow at the Pothole. Yoshi also connected at the Pothole that same day, pulling in a three-and-a-half-pound grilse. As for the Hooké boys? Their relentless quest paid off with a 20-pounder, caught a little before 9 a.m. on the final day amid a yellow stonefly hatch, just upstream from the lodge.

I won’t get into all the details of my subsequent attempts to greedily catch and release a second salmon, other than to say I lost another grilse at the Pothole Pool on our second-last morning after it leapt clear of the river twice before spitting the hook. Then there was the freight train I set on—surely a big fish—that snapped my 15-pound tippet.

Oh, and I also inadvertently snagged a salmon parr that had swiped at my fly, only to have a small sea-run brook trout take a run at it. For a brief moment, I had both dinks on the line, but I shook off the brookie and released the parr with little more than a flesh wound in its flank and a second chance at one day becoming a grilse.

Grilse. I’ve used that word a few times already in this article. For the uninitiated, that’s the taxonomic term for a salmon that has returned to its natal river after spending just one winter out in the Atlantic. You can’t tell the difference between a grilse and a multi-winter fish, except for the fact that grilse are smaller on average. Nonetheless, I’ve picked up on a peculiar bit of piscatorial snobbery when it comes to grilse—namely, in certain angling quarters, they’re not actually considered full-fledged Atlantics. But did I let that diminish my personal accomplishment? Not a chance.

For everyday anglers, Glen Eden Salmon Lodge on New Brunswick’s storied Restigouche River represents a welcome crossover from the private, old-money lodges of yore. Once an exclusive angling enclave belonging to the Royal Bank, where financial mucky-mucks wheeled and dealed, the lodge was purchased in 2014 with the express purpose of opening it up to the paying public keen on traditional angling for the river’s famed Atlantic salmon. Built in the 1920s, with extra guest quarters added early last year, the lodge now accommodates up to eight anglers for three-, four- and seven-day stays, with awesome meals included courtesy of camp chef Cindy Firth. Lobster anyone? Whether you catch a fish or not, you won’t leave here without that addictive sense of what Atlantic salmon fishing is all about.