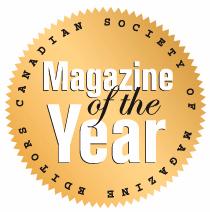 Outdoor Canada nominated for prestigious Magazine of the Year award

Could this be our year?! All digits are certainly now crossed. Earlier today, the National Magazine Awards Foundation released the nominations for June’s annual awards ceremony celebrating the best in Canadian magazine journalism and creative. Three magazines are listed as contenders for the prestigious Magazine of the Year honour: the Montreal arts and culture title Maisonneuve, the new Rogers Media sports mag Sportsnet and, you guessed it, Outdoor Canada.

This is the third time Outdoor Canada has been up for this particular honour during my tenure as editor of the magazine, so here’s to three times lucky! Of course, my editorial team and I are more than pleased just to be nominated, but man, would a win be sweet. (Just imagine a fishing and hunting magazine taking home the top prize at a Toronto media event!)

Congratulations to everyone involved in Outdoor Canada, from our roster of freelance field editors to everyone here at our publishing house, Cottage Life Media Inc. The nomination is a true feather in our collective cap.

Not that the Mag of the Year short-listing was the only nomination for the publications here at our Queen West digs in Toronto. Fellow magazine explore garnered a whopping 19 operations, while Cottage Life picked up a healthy nine. Huge congrats to my colleagues.

Along with the Magazine of the Year nod, Outdoor Canada and its contributors also received three other nominations:

The winners will be announced June 7 during the awards gala at the Carlu in Toronto. Stay tuned! (Click here to learn how we made out at last year’s awards ceremony.)