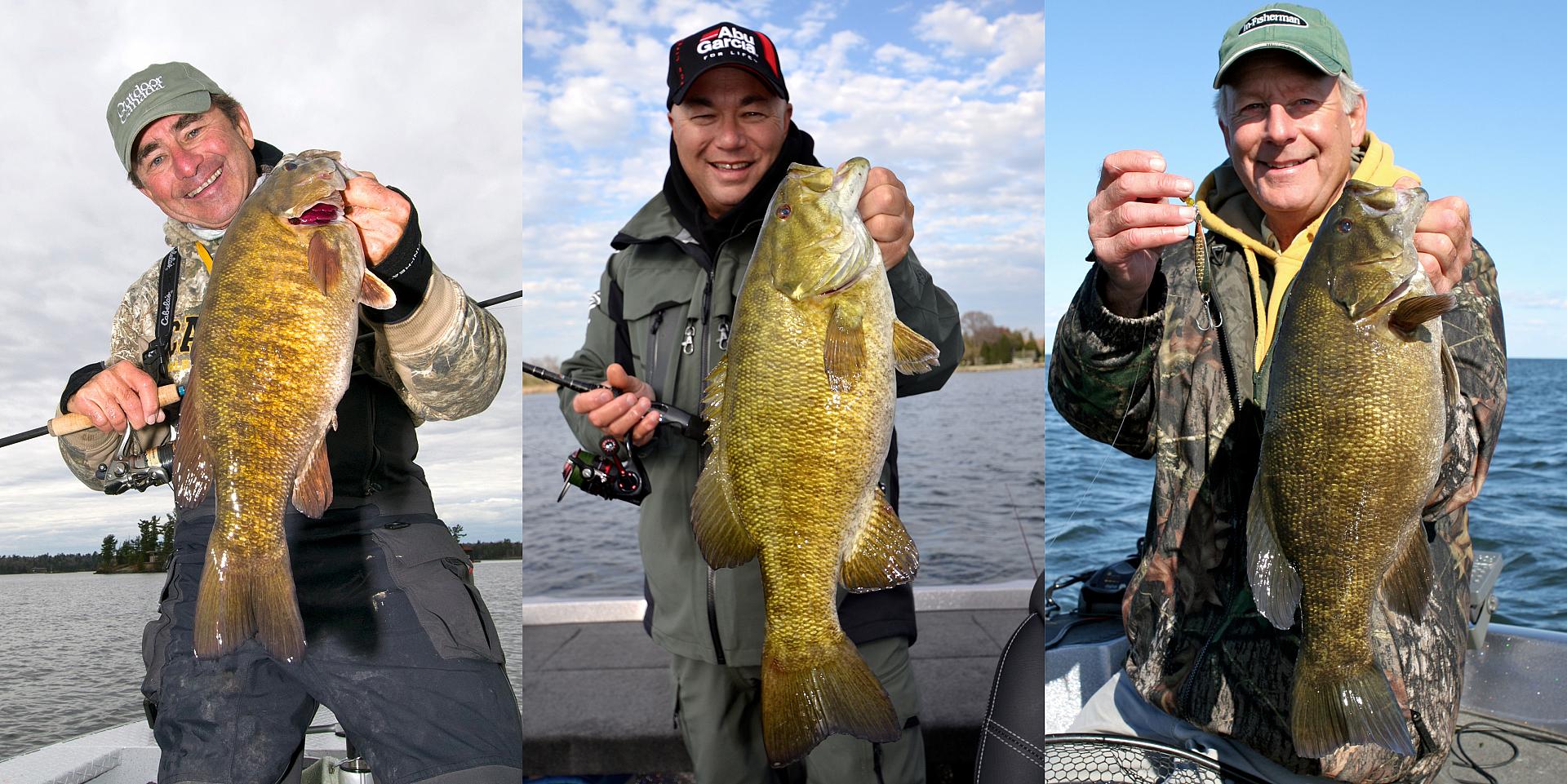 To catch fall smallmouth, get aggressive! Three pro tactics for boating the biggest bass of the season

The most important lesson I’ve learned while fishing for smallmouth bass in the fall is that much of what we’ve been taught as gospel truth is, in fact, wrong—especially the need to slow down, fish with finesse and use live bait when the water gets cold. In fact, if I could urge you to do only one thing to increase your success this fall, it would to do the exact opposite.

A few years ago, three things led me to discover that autumn smallies respond to aggressive presentations. First, I simply continued my summer bronzeback bombing runs with big, brawny baits into September. I expected the bass would stop responding at some point, telling me to slow down. But that never happened.

Next, my good friend Doug Stange, host of In-Fisherman TV, visited me to shoot an episode on cold-water smallmouth. Imagine my surprise when he hauled out a medium-action baitcasting outfit and a 5/8-ounce Luhr Jensen Tony’s Spoon. I figured he was going to drop the relatively heavy lure over the side of the boat and vertically jig it in the traditional manner for late-fall smallmouth. He didn’t.

Instead, Stange cast the spoon country mile, let it flutter to the bottom under controlled-slack line, then ripped it up shockingly hard. Next, he smacked the reel handle with his free hand—yes, smacked rather than reeled—to recover line quickly and repeated the manoeuvre, never letting the spoon touch bottom for more than a millisecond.

Up until that point, I thought I’d been fishing aggressively, but this was crazy. On the second or third cast, a fat fall smallmouth smacked Stange’s spoon. Then he caught another, and another and another. If this was crazy, I decided it was what I wanted to be.

The third thing was a conversation I had with my buddy Bob Izumi (below) while we were taping our Real Fishing Radio Show. Izumi, who has the attention span of a gnat, was playing with some lures in a tackle tray on the desk in front of us. “Have you used one of these new Johnson Thinfishers for smallmouth in the fall?” he asked, holding up a lure similar to a small Silver Buddy, one of the finest bladebaits ever invented. “I smoked the smallmouth with it on Erie last fall. And here’s the funny thing: it produced more and bigger bass as the water got colder.”

While Stange, Izumi and I had all arrived at the same conclusion—that heavy metal rocks for fall smallmouth—we each have quite different presentations for bombing the bass. Izumi’s is the most laid back technique, Stange’s is the most energetic and mine is somewhere in between. Here’s how they work.

Izumi says bladebaits such as the Thinfisher begin to shine when the water temperature hits 50°F or so, with the action peaking around 45°F until ice-up. When targeting the big, goby-slurping bronzebacks of the Great Lakes in the fall, he looks for fish relating to the bottom in 20 to 30 feet of water.

Once he marks fish on his sonar, Izumi backs off and fires out long casts, letting the half-ounce Thinfisher (below), with its built-in rattle, plummet to the bottom. Next, he smartly lifts up his rod tip 12 to 18 inches, just enough to feel the lure gently pulsate and wobble, then stops, lets the lure settle back down to the bottom, and pauses. 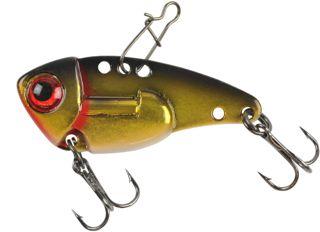 “I’m amazed how many times a smallmouth will scoop the lure up off the bottom,” Izumi says. “Because the water is so clear, they must watch it fall, then swim over and pick it up. But I’ll never understand why so many fish eat that lure when it’s lying on the bottom like a hunk of metal.” (He uses the Thinfisher in a full range of colours, but his go-to is the black/gold model.)

Proper gear is critical for this technique. Use a rod that’s too stiff—and thus, too sensitive—and you’ll pull the lure out of the fish’s mouth. There has to be some lag time between the moment you feel a bite and when you set the hook. Izumi uses either a seven-foot medium- or medium-heavy-action spinning rod, and spools his outfits with 20-pound braid, adding a four-foot leader of 12-pound fluorocarbon to protect against the innumerable zebra mussels.

“I don’t believe using lighter line produces more strikes,” he says. “We’re talking about big, aggressive fish, and a presentation with lots of flash and vibration. It’s the most active finesse presentation you can employ.”

While Izumi considers his technique active, it belongs in a rocking chair at the old folks’ home, compared to the way Stange (above) fishes his Tony’s Spoon. Often, he even adds the metal clacker from a Fergie Spoon to the front of the lure to make more noise.

The difference in styles can be attributed to where the two anglers chase smallmouth. Izumi typically fishes the big, fast-growing bass of the Great Lakes, while Stange usually targets the slower-growing smallmouth found in Canadian Shield-type waters. As a result, he needed a way to get the big bass to bite while weeding out the smaller one-, three-pound fish. He found it, amazingly, by making his lure act in the most erratic, unpredictable manner possible.

“Big smallmouth are street smart, but at the same time, they’re curious,” says Stange. “So you have to make a presentation that plays to those traits.” In other words, the presentation has to appear edible and catchable—but just barely. If you take away the curiosity factor and make it easy for big bass to get a good look at your lure, they’ll pass it up more often than they’ll strike.

So instead of slowing down as the water got ever colder, Stange now speeds up his presentation—so much so that while he’ll let his lure touch bottom, he never lets it rest there, even for a second.

For this rippin’ technique, Stange likes to use a 6′ 6″ medium-action baitcasting rod teamed with a high-speed, low-profile reel (a 7:1 retrieve ratio is critical). He spools on 20-pound test braid, with a four-foot, 20-pound-test fluorocarbon leader. And along with the Tony’s Spoon (below, right), Stange has added Rapala’s Rippin’ Rap (below, left) and Johnson’s Slama and Shutter spoons to his arsenal.

Like Izumi, Stange fishes water as deep as 30 feet in the fall and begins by making as long a cast as possible, allowing the lure to fall to the bottom on slack line. But then Stange engages the reel, positions his rod tip at 9 o’clock, rips the lure off the bottom by snapping his rod tip up to 11 o’clock, then immediately drops the tip back down to 9, striking the reel handle with his free hand to retrieve line as the lure falls back to the bottom.

Here is the crucial part: when smacking the reel handle, Stange is careful not to recover all the line, as the lure must tumble to the bottom on completely slack line. “The hardest thing for most anglers to develop is a rhythm,” he says. “They want to watch their line to see when the lure touches bottom. Don’t do it. The bass either strike the lure on the fall or pin it during the nanosecond it touches bottom. You rarely feel them strike. Instead, they’re just there when you make your next rip.”

Once Stange has retrieved between half and three-quarters of his line, he reels in to make his next cast, because at that point the lure is too high in the water column to be effective. This means that he makes up to twice as many casts, and keeps his lure in the strike zone twice as long as an angler who works the lure all the way back to the boat. It’s small detail that pays big dividends. 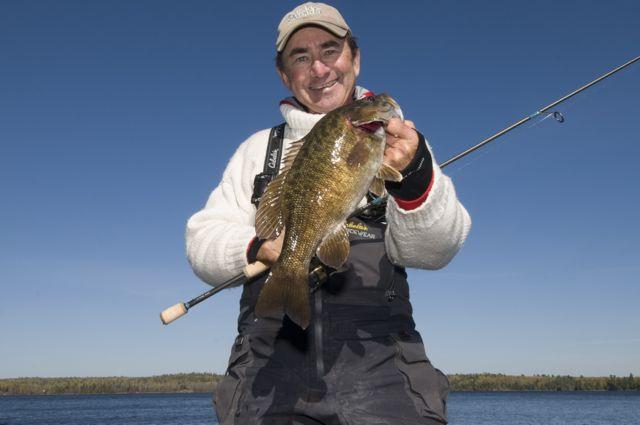 Locking your lure into the strike zone for the maximum amount of time is a fall bass tactics I’ve also exploited for several years, although I stumbled into the pattern while pulling big five- and six-inch paddletail swimbaits for deep-water walleye.

For years, a few close friends and I had been wailing away on Waldos by casting big swimbaits pinned to heavy ½-, ¾- and one-ounce jigheads. The routine involves making a long cast, then fishing the lures aggressively, keeping them within a foot or so of the bottom with a repetitive, fast-paced lift-pause-drop-pause retrieve.

Then we wondered what would happen if we didn’t waste time casting. So we simply dropped the heavily weighted bait alongside the boat, let it plummet to the bottom and used the bow-mounted electric trolling motor to slowly troll—or “stroll”—while imparting the same action to the lure without retrieving line. It was lights out for the walleye.

Soon thereafter, we made another pleasant discovery. On most lakes across the country during the fall, walleye are joined on deep main-lake structures—underwater points, reefs and rock piles—by increasing numbers of smallmouth bass that have spent the summer in much-shallower water. And those bass will also devour swimbaits (below).

Indeed, the moment it came together is etched in my memory. My grandson Liam, who was six years old at the time, and I were strolling swimbaits over a school of gorgeous walleye, averaging between five and seven pounds. Then Liam howled, and I turned around to see his rod tip bucking dangerously close to the breaking point.

“Grandpa, grab the net,” he hollered. Assuming it was another big walleye that was going to wallow close to the bottom for a few more minutes, I took my time. Imagine our surprise, however, when the biggest north-country bass I’ve ever seen came rocketing out of the water, reaching the pinnacle of its leap just inches from my face. Had I been ready, I could have scooped it out of mid-air with the net. But I wasn’t, and the hook popped free on splashdown. Liam has reminded me of that one that got away ever since.

While that mega-bass may have won its freedom, scores of others have since paid a short visit to the inside of my boat (above). I stroll with the same medium-heavy-action 7′ 2″ spinning rod and reel spooled with 14-pound superline that I use in the summer for casting five- and six-inch swimbaits for walleye. And I make my four-foot leaders with 12-pound test monofilament, since I prefer the slight stretch for this technique.

As for technique, I drop the paddletail over the side of the boat, let it fall to within a foot of the bottom, then pull it up and let it fall as I stroll. I move the bait more aggressively than Izumi lifts his Thinfisher, but not nearly as much as Stange rips his spoons. The prefect presentation is when I can fine-tune the speed of the electric trolling motor to keep my line trailing alongside the boat at a 45-degree angle, with the ¾- to one-ounce jig within a foot of the bottom. I pull it hard enough that I can feel the body of the bait shiver as it rocks sideways when the paddletail flaps. Then I pause for a second or two on the upsweep before letting it fall back down to the bottom under controlled slack line.

Whether you use Izumi’s, Stange’s or my method—or best, try all three—I think you’ll be in for the surprise of your life this fall, especially if you’ve been taught to slow down your presentation when the water gets cold. Just be ready to be branded a heretic. But a fish-catching one at that.