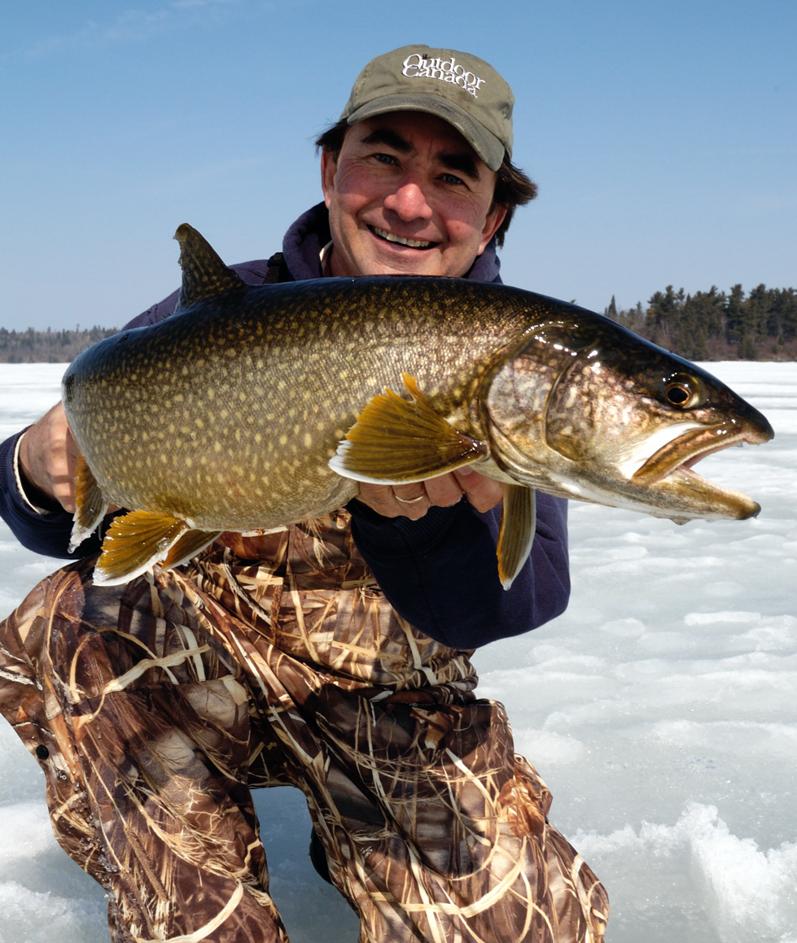 Thanks for all your tips on quick-strike rigs. I am a convert. I know you’ve talked about them a lot lately, but I have a couple of questions. Until your blog post a few weeks ago, I had never heard of using them for trout. Other than using mono, do you tie them any differently in terms of hook spacing and size? Also, do you ever dress up your rigs with some beads, spinner blades, or even a little spoon? I believe this is actually required in some jurisdictions in the US, but I did a few like this just for fun. They worked fine, but I’m always looking for that little edge.

Well, Wesley, I tie my quick-strike trout rigs exactly like my pike rigs. The only difference, as you pointed out, is that I use either quality 12-17-pound test monofilament or fluorocarbon line (Maxima or Sufix) instead of wire.

I also use the same #4 or #6 Gamakatsu treble hooks (I like the bleeding red ones for lake trout) and space them 2 1/2 to 3 inches apart, depending on the size of the dead bait I’m going to use.

Once again, it’s important to hang your dead bait vertically in the water column—not horizontally—and the best way to do this is by inserting one hook from the top treble lightly under the skin, along the back, near the tail. Place a hook from the bottom treble under the skin alongside the dorsal fin, and then lower it into your hole.

Finally, as I mentioned in the previous blog, they’re called “quick-strike rigs” for a reason. You pull back on the line and “sweep set” the hooks as soon as you see your tip up flag fly.

As for adding beads and tiny spinner blades, I rarely do this unless, as you point out, the local regulations require it. The distinction is whether a “bare” quick-strike rig is considered a “lure.”

Most provinces allow you to have a maximum of four hook points (a treble is considered one hook point) on a lure, hence the popularity of fishing with jerkbaits, minnowbaits, and crankbaits, which all come with multiple treble hooks.

By adding a couple of beads and tiny spinners to your quick-strike rig, you can transform a “bare” quick-strike rig into a “lure” if your local enforcement staff suggests it isn’t one to begin with.

The second question comes from Andy, in Toronto, who writes:

Cheers, Mr. Pyzer! I am an avid fisherman who grew up in the UK. Circumstances brought me here a few years ago, so I’m rather new to ice fishing. But I’ve had a thought. Do you ever chum through the ice? We chum a great deal in the UK for carp, and I was wondering if it might work on pike, sunfish, etc. Also, it might be a good way to get some freezer-burned mackerel out of my freezer.

It’s a great question, because chumming works extremely well, yet few Canadian anglers take the time to do it, probably because we enjoy higher game fish populations in most of our waters.

Nevertheless, I was over in Finland a few years ago and met a superb English angler named Nige Williams. Nige is known as the “Bounty Hunter” in the UK, because when he sets his sights on catching a specific big pike—he actually targets individual fish—he is relentless in his pursuit.

Anyway, Nige and I got talking about “chumming,” or “pre-baiting,” and he told me that if he lived in Canada and ice fished for pike, within a week he could draw the fish to the spot he was going to fish.

As a matter of fact, Nige told me that when he’s targeting a big pike in the UK, he will chum a spot every morning for a week, so that when he returns to fish on the Saturday or Sunday, the pike will be waiting for him when he gets there.

I grew up in southern Ontario, and I used to have an ice hut out on Lake Simcoe, where I ice fished for whitefish in the winter. Back in those days, it was standard procedure for anglers to place half a bushel of salted emerald shiners on the bottom of the lake, beneath their hut, at the beginning of the season and then to augment the “bait pile” with a juice can full of salted shiners every five or six days.

It was not uncommon back then, when you cleaned a whitefish for dinner, to discover a handful or more of salted shiners in its stomach. Also, at the end of the season, when the ice huts were being removed, if you were one of the last few anglers to continue chumming your hole, the fishing got better and better and better as the other holes “dried up” and your bait pile was refreshed.

So, does pre-baiting work in the wintertime? You bet it does. Just be sure to check your local regulations to determine if there are any rules regarding the species and quantities you can use.