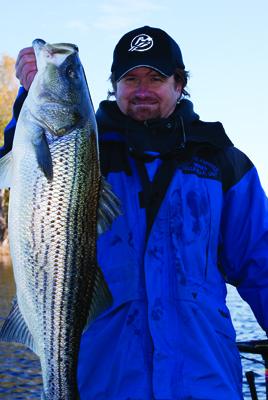 Thank goodness striped bass are wanderers. Up the east coast of the U.S. they travel before entering Canadian waters and eventually hanging a left into the Saint John River—this country’s hands-down striper hot spot. Every year, more 20-pound-plus specimens are caught within the city limits of Saint John than in the rest of Atlantic Canada combined. The unofficial Canadian record, a 62-pound 14-ounce brute, was landed here in 1979 and now hangs mounted in Doiron Sports Excellence, a local tackle shop. The fish may be a ways off the 78½-pound official world record—caught near Atlantic City, New Jersey, in 1982—but it’s an outstanding catch nonetheless. More recently, an angler earned bragging rights when he brought a 48-pounder ashore near the end of last September. The most popular striper tackle includes a nine-foot surf rod matched with an 8000 series spinning reel spooled with 80-pound braid and a 40-pound fluorocarbon leader; American eels are the popular local bait. Boat anglers should anchor off the west side of the Reversing Falls, while shore-bound casters typically hang around the end of Main Street or the Reversing Falls Restaurant. Stripers aside, there’s also a unique local sportfishery for Atlantic sturgeon, which frequently top 300 pounds, and the much smaller shortnose sturgeon. Just one more reason the Saint John River is one of the nation’s top angling destinations.

In 2008, Striped bass; The biggest stripers in the world

When to fish: October and November.

Where to fish: During strong tides, work turns and holes in the lower river.