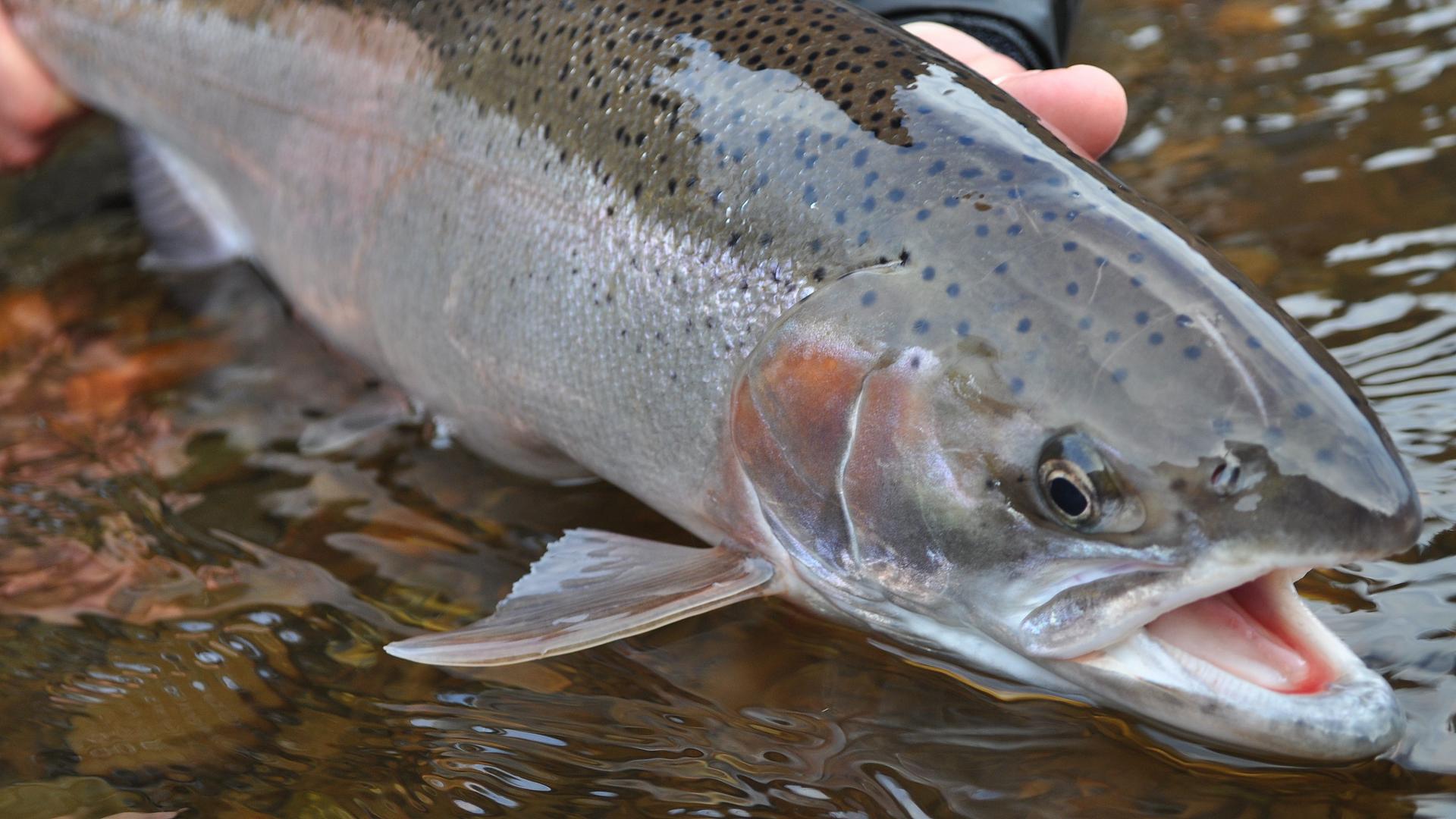 My cast was long, landing just shy of the far bank, and directly upstream of a partially submerged cedar tree. A few quick turns of the reel handle and the lure was in motion. But before the current fully caught the crankbait, my rod doubled over under the weight of a fresh chrome steelhead.

Most steelheaders stick with one technique—be it float, drift or hardware fishing—and pound the water until they perfect it. Versatility is what separates the good steelheaders from the great ones, however, and digging into your crankbait box is another great way to land fish.

Casting crankbaits is also great way for beginner steelheaders to go after chromers; since they likely don’t own noodle rods and centre-pin reels, they can just use the gear they already own. Whether you’re new to the steelhead game or simply want to try something different, here’s how to crank home some chrome.

Crankbaits aren’t new to steelheading, but they’re typically fished from a boat. With rods in holders, the lure is held against the current as the boat slowly backs through a run. Known as hot-shotting, this method produces a lot of fish, but not all of us have a driftboat at our disposal.

You can still take advantage of this historically productive steelhead lure, however, by pitching from shore. With a well-placed cast, a crank can even reach areas inaccessible by hot-shotting—when moving down the river in a boat, you often miss cover where steelhead could be lying in wait. Tossing a crank can lure out those big fish.

There are two simple, effective techniques to target aggressive steelhead with a crankbait: pitch-and-swing and pitch-and-retrieve. With the pitch-and-swing, you fish the crank the same way you would swing a spoon or a spinner. Cast directly in front or slightly upstream of your position; give the reel a couple of quick turns to set the lure in motion, then let the current do the work, swinging the bait through the run. Once the swing is completed, hold the lure in position for a moment, then slowly begin your retrieve, pausing along the way. This can sometimes trigger a hit from a fish that’s been following the lure throughout the swing.

The beauty of the pitch-and-retrieve, on the other hand, lies in its simplicity. It really is as easy as it sounds. Just cast the crank wherever you want—upstream, downstream or across, it doesn’t matter—and retrieve it however you want. Work the lure fast or slowly, in shallow runs or deep pools. You’re looking for a reactionary strike, so let the fish dictate the retrieve that’s going to work best.

Whether swinging or retrieving, always watch your lure. The bait itself may not always be visible, but a sudden flash in its vicinity tells you an aggressive fish has just taken a swipe at it and missed. Keep casting until it comes back—and usually it will, even if it takes a couple of lure changes.

Crankbaits may never replace steady steelhead producers such as roe bags, but there are times when they just can’t be beat, particularly for fresh-run fish. It pays to become familiar with steelhead behaviour and how they relate to weather and water conditions in your region. This varies from system to system, but with experience, you can pinpoint days when fresh fish are likely to be moving in, then take advantage with a crank.

Fall and winter runs tend to be small, and they’ll change from year to year depending on river conditions. The window to toss cranks at this time of the year can be short—time the run incorrectly, even if you’re off by just a day or two, and you could be schooled by the guy next to you running bait under a float. But time it right and you’re in for some seriously exciting action.

There’s one thing, however, you can count on: steelhead become increasingly aggressive as the spring spawn approaches. The month, or in some cases couple of months, before the spawn can offer the most consistently successful crankbait fishing of the year. This pre-spawn period sees a steady push of aggressive, territorial fish—the ideal crankbait targets.

I prefer lures that dive two to five feet. Steelhead sit in the bottom 12 inches of the water column, looking out and up, so it’s always best to have the crank running above them. If your lure is making too much contact with the bottom, you can easily fish it higher in the water column by holding the rod tip up, and slowing down your retrieve.

Classic steelhead crankbaits such as the Storm Hot ’N Tot, Lindy River Rocker and Kwikfish work just as well when cast as they do when trolled behind a boat. On days when none of the classic shore techniques are working, in fact, steelhead will often smash these lures, triggered by the high-action wobble.

Great Lakes anglers were certainly onto something when they started trolling cranks for shallow-water staging steelhead—popular lake baits such as the Rapala Shad Rap and the Reef Runner Ripshad can also be deadly for river steelhead. The same goes for minnowbaits, such as the Bomber Long A and Rapala’s Original Floating Minnow and Husky Jerk. I’ve had territorial fish seemingly come from nowhere and follow my minnowbaits all the way back to the rod before practically ripping it out of my hand.

My go-to rod for all-around steelhead cranking is the G.Loomis STR1082S. It’s a lightweight nine-foot rod with a moderate-fast action. The length and power offers considerable control and helps to turn big fish, while the sensitivity lets you feel every wobble of the bait.

I use a spinning reel, which I find better for making accurate casts in tight quarters. You want something with a smooth, strong drag. I try not to over-fight the fish, so if a steelie is trying to run, I often apply considerable pressure to bring it in. You can get away with running 10- or 12-pound mono, because these are aggressive fish that don’t spook easily. However, I do add an eight- to 10-pound fluorocarbon leader, but more for its abrasion resistance than invisibility.

These days, most steelhead anglers seem to prefer subtle, low-profile, stealthy techniques. As a result, they often overlook just how aggressive steelhead can be at times. But when the bite is on, nothing beats throwing a crank—and holding on tight for the ride. 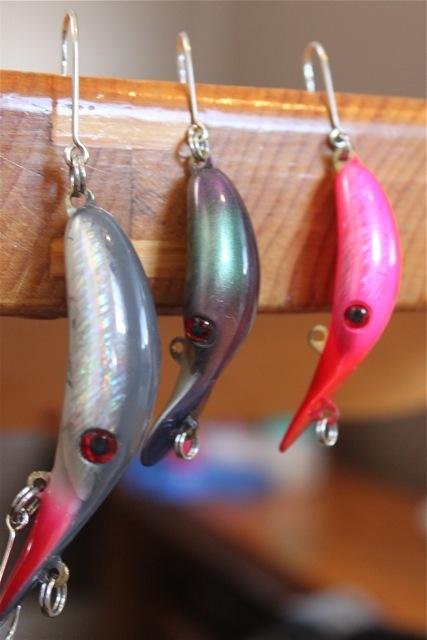 Steelheaders are passionate about protecting fish. That’s why I replace all the treblehooks on my steelhead lures with single siwash hooks. When using a treble, often two or more hook points get imbedded in the fish’s jaw, and it can be difficult to release these large, strong fish without damaging their mouths. The single hook is much easier to remove, which means less handling time and a safer release. And I land just as many fish—in fact, I believe siwash hooks hold better than trebles.