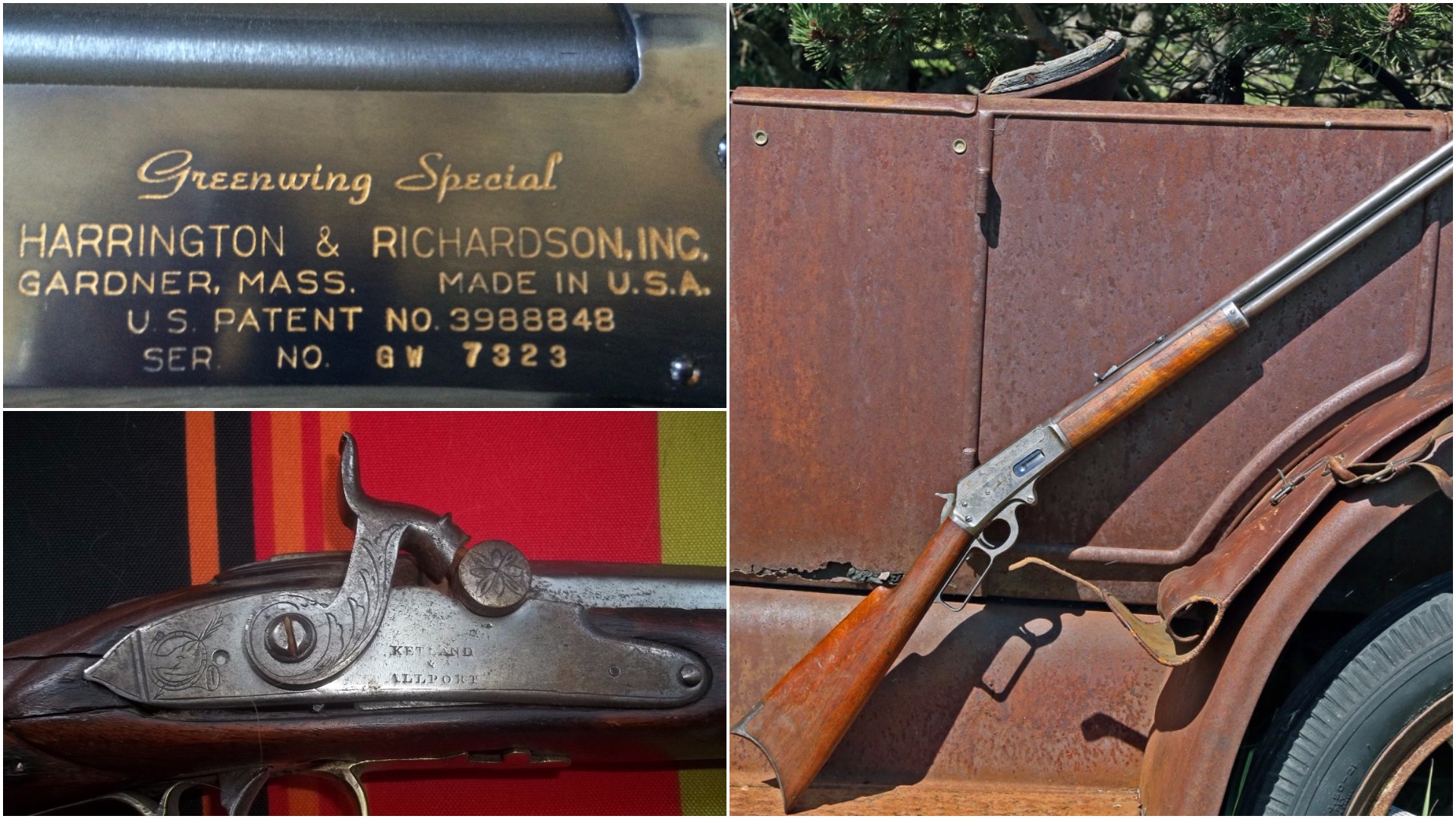 The history of a 200-year-old “Chief’s Musket,” a 20-gauge Greenwing Special and Weimar-era German-made .22

I recently bought this 20-gauge Greenwing Special (above and below). The previous owner told me it’s 20 years old and has never been fired. It appears to be in mint condition, and it takes three-inch shells. I would like to know how much it’s worth.

The Greenwing Special was made by Harrington & Richardson as a variation of the Topper Model 158. It was chambered in 20 and 28 gauges, as well as in .410, apparently as a youth gun with a shorter length of pull. It’s weight is around five pounds, and I’d guess the recoil with three-inch magnum loads would be right up there.

The Greenwing Special was made from 1978 to 1983. Harrington & Richardson made a large number of single-shot shotguns, and although they’re not very fancy guns, they’re well made, safe and serviceable. I don’t know of any collector interest. I’d estimate value in the range of $175 to $200.

Could you tell me a little bit about this old single-shot .22 (above)? It’s been in our family for at least 70 years. On the left side of the barrel just ahead of the hinge mechanism, it’s stamped “CAL 22 long rifle.” On the top of the barrel it’s stamped “DEUTSHE WERKE-WERK ERFURT,” and on the bottom of the barrel there are what appear to be two crowns with the letter “B” and “5.4 mm.” As well, “D.R.P. Germany” is stamped on the side hinge plate, and there’s an insignia on top of the hinge plate that looks like a serpent in a circle with “Mod 1” stamped beneath it. I’d like to know the age of this .22, and what make it is.

This is a Model 1 rifle. These .22s were made from 1919 to 1939 by Deutsche Werke of Erfurt, Germany, but I’m afraid I have no way to pin down the exact year yours was made. Deutsche Werke also produced the Ortgies pistols around the same time. The letters “D.R.P.” stand for “Deutsche Reichspatent.”

The insignia you mention is a company trademark called the “Dormant Lion.” What appears to be a serpent is actually the lion’s tail (at least that’s what the sources say, though it sure doesn’t look like a lion to me). The Dormant Lion logo was usually stamped on the left rear of the stock. If your rifle’s stock was refinished, the stamp may have been sanded away. There was also a deluxe version with a checkered stock, with the lion logo inset on a brass medallion.

The Model 1 was an inexpensive boy’s rifle, and it was fairly popular for its era. I saw a couple in use on Saskatchewan farms when I was a kid in the 1960s, and they seem to show up online fairly regularly, either for sale or for identification. Despite the modest price, they were well-made, reliable and durable rifles. Online asking prices for models in good to very good condition seem to be in the range of $150 to $250. 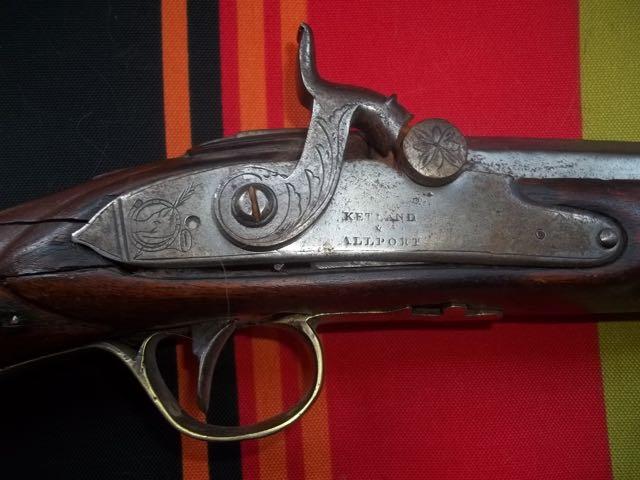 My husband, Ted, inherited this rifle (above) from his grandfather quite some time ago. We would like to know its origin, age, value, what it was used for and any other information you can provide. It’s 52 inches long, and it bears the name “Ketland and Allport,” as well as “39” and “London.” I greatly appreciate any assistance you can give us.

Thomas Ketland was a very successful Birmingham, England, gunmaker. He started his business in 1760 making Brown Bess muskets for the British army and militias. He expanded into the export market around 1790, primarily to Canada and India. His partner was James Allport, who had an exporting firm based in London. Ketland died in 1816 and the business wound up around 1821.

The marking on the right lock plate behind the hammer is a trademark used by Ketland—a boar’s head with an arrow through it, surrounded by a hunting horn. The emblem on the top of the stock wrist indicates this was a Chief’s Musket, made as a trade item for export to Canada, most likely around 1800. In the early 1800s, the British provided a considerable amount of trade goods, including muskets such as this, to First Nations peoples in Canada. The British objectives were to maintain peaceful relationships and build alliances with First Nations in the event of further conflict with the U.S. following the War of Independence.

At some point, your gun was likely traded to a British settler. It was originally made as a flintlock, but later converted to use percussion caps. Percussion cap use began around 1820, and over the following few decades many flintlocks were converted. With the Ketland flintlock conversion, components such as springs and the pan were removed, and the vent hole to the barrel was enlarged. A drum was made and fitted over the vent hole, with a nipple in the drum to hold the percussion cap. You can see how the lock plate has been filed in a semi-circle to fit neatly around the drum. The original hammer, which had jaws to hold a flint, was either altered or replaced with a hammer that fits over the nipple to ignite the percussion cap.

Muskets such as this one have become very collectible, both as interesting firearms and for the part they played in Canadian history. I’ve seen original flintlock Ketland and Allport muskets in good condition trade on U.S. sites for $4,500 and up; the value is reduced if the musket has been converted to use percussion caps. There are some bad cracks on the stock of your musket, which further reduces the value. Nonetheless, I think your gun would bring $1,500 to $2,000 at auction, and I could be low at that. It’s in fairly good condition considering it’s more than 200 years old, and most likely saw hard use in a tough environment. 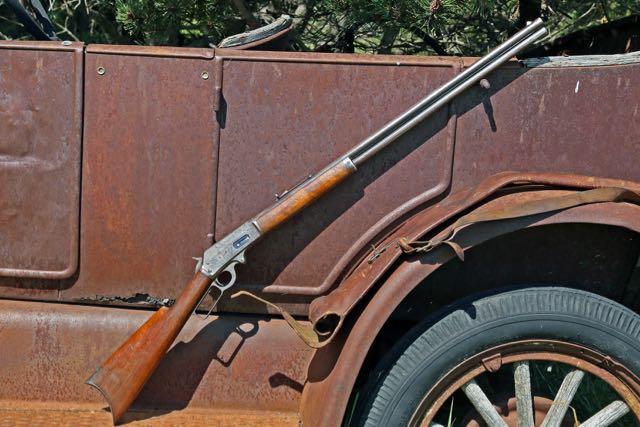 This Marlin 1893 belongs to a neighbour of mine, and it’s been in his family for well over a century. His grandfather brought it west with him when he established a Saskatchewan homestead in 1904. These rifles were manufactured from 1893 to 1936, and according to the serial number records I have on hand, this particular model was made in 1894.

Chambered for the .38-55 cartridge, this rifle has a 28-inch round barrel and all its original parts. The action cycles smoothly and reliably, and overall the rifle is mechanically sound. The bore is dark, but the rifling is very good. There’s considerable surface rust on the receiver, butt plate and barrel, and some pitting. There’s also one small crack in the stock behind the tang, and several screw heads have twisted slots. These factors all reduce the value to collectors.

Still, this rifle would certainly be of interest to collectors, especially since it’s in excellent mechanical condition and chambered in .38-55, rather than the much more common .30-30 and .32 Special. I estimate it’s worth between $850 and $1,000. The leather case is as old as the rifle, and it appears to be quite well made. There are no manufacturer marks on it, so most likely a local harness and saddle maker made it.