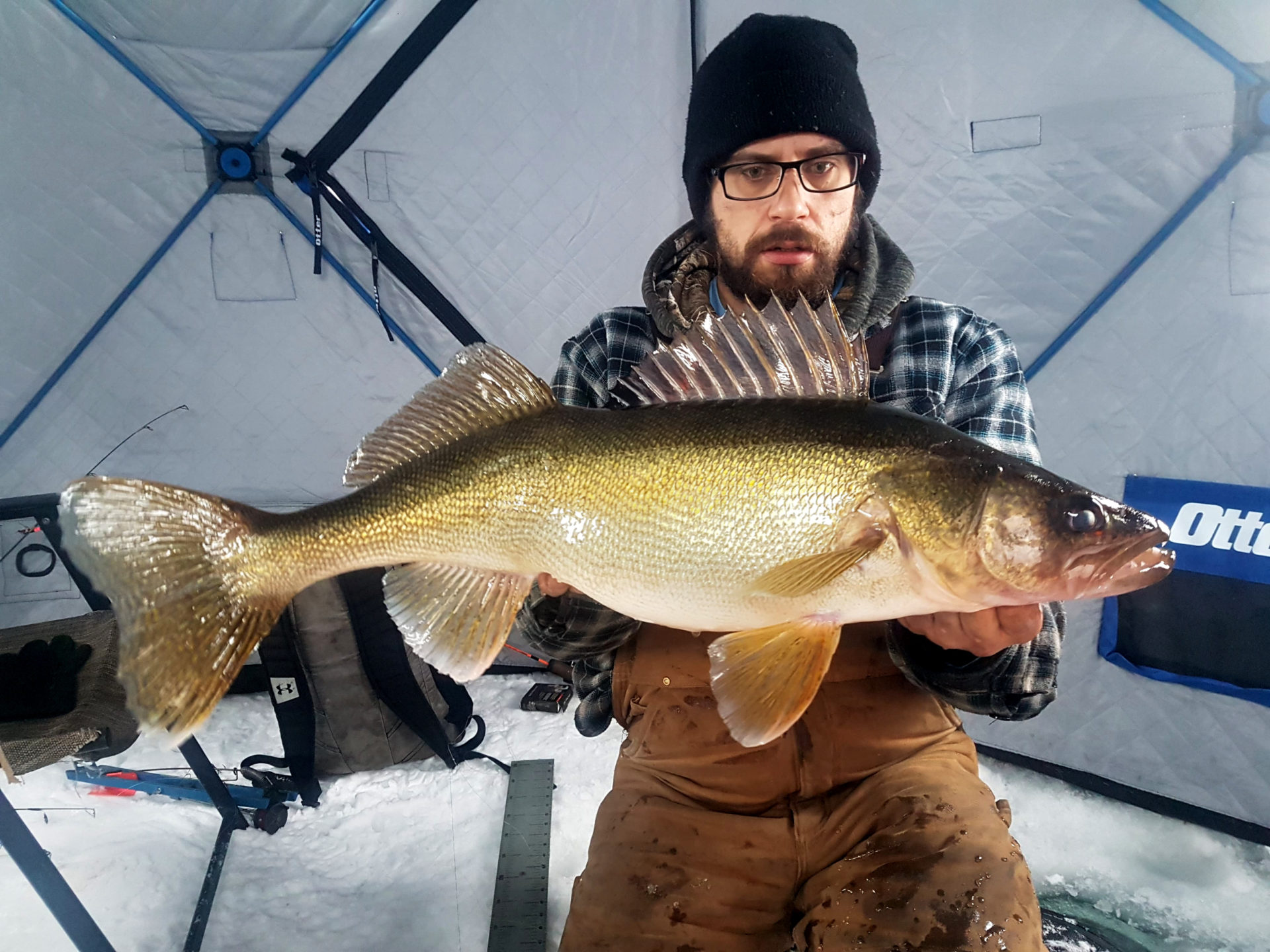 The #1 tactic for putting big reservoir walleye on the ice

I have built up a pretty good network of angling friends over the years, spread out across the country, with whom I’m in frequent, sometimes daily, contact. And not surprisingly, like most “fishing communities,” we share images of our best big-fish catches, what is working at any particular point in time and, perhaps most important of all, what isn’t.  Because my “bush telegraph” is so geographically diverse, stretching literally from sea to shining sea, I’m always fascinated to hear about different strategies that are putting the same species of fish in the boat or on the ice.

A good example is Manitoba buddy Jon Hyrchuk, who ice fishes for walleye on the many flooded reservoirs across Saskatchewan and Manitoba. That includes places like Lake of the Prairies where Jon has been catching some wicked winter walleye lately. But it was an off-the-cuff comment he made about the importance of fishing the original flooded river channel that caught my eye.

“The biggest difference I see between the natural lakes that you ice fish, and the reservoirs I fish,  is that you guys target many different structures on natural lakes,” Jon told me. “You guys fish rock piles, deep weed lines, sand bars, ledges, underwater points and river mouths. But I follow the underwater contours of the old river channels that were damed and flooded.

“Don’t get me wrong, structure still plays a part of the game, but it’s all based on the old river channel. I find that any hard break or turn in the river can be a great spot to target. I follow the time of year and the walleye, as they move north. Natural structure, plays zero role for me. It’s a chase game. I try to get my lure in front of the fish before they continue moving up the river highway. I especially like targeting any bend, twist or turn in the natural flow of the river. That is where I locate the most active fish.” 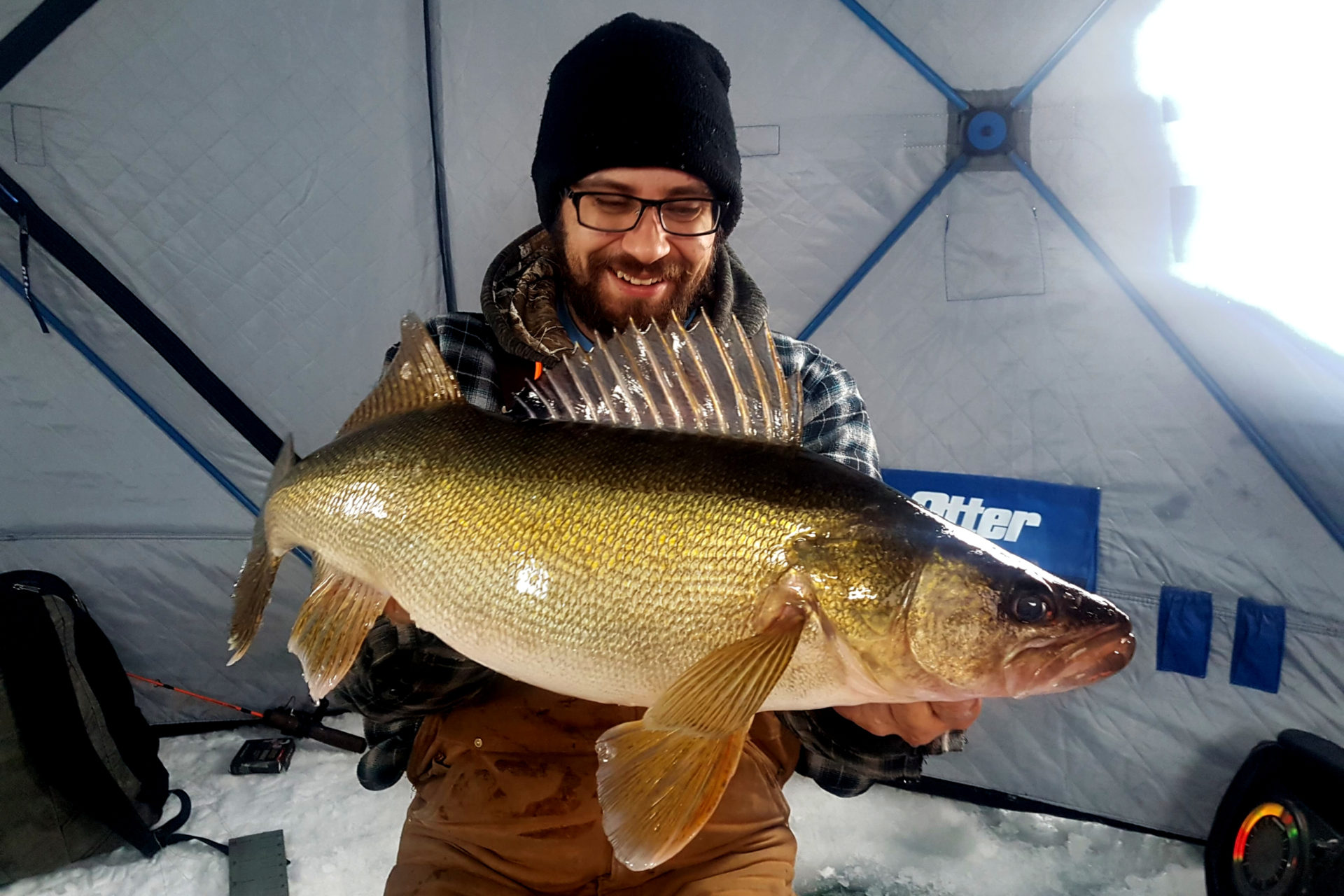 As I listened to Jon, I assumed, as someone who infrequently gets the chance to ice fish for reservoir walleyes, that he was also finding the fish relating to current, whether subtle or significant.  So I was surprised when he said that moving water didn’t much affect his results.

“There is current,” he said, “but it only affects the winter fishing in a negative way, when they release water from the reservoir. Then the fishing gets harder. The more the flow of water varies from normal, the more the fishing slows down.”

Although Hrychuk looks for walleye in places foreign to most anglers used to natural, Shield-type lakes, the tactics he relies upon to catch his fish are similar. “A jig tipped with a minnow is very effective,” he says. “And I really enjoy using ACME Hyperglides and Rapala Jigging Raps. Chartreuse and purple are my go-to colours.

“I jig three to five feet off bottom, in 15 to 25 feet of water, and pause for random intervals up to a few minutes in length. I fish this tactic for larger, aggressive walleye. When it’s slow, on the other hand, I tend to fish a jig and dead minnow combination tight to bottom. I can catch great numbers of walleye this way on slow days.”

Gotta confess, I was curious to hear my friend say that he switched over to a dead minnow when the bite gets tough. You’d think these would be the very times that he’d want the liveliest minnow in the pail, but he says it is not the case. “The slightest jigging or live action from a minnow will deter reservoir walleye from biting when they’re not actively feeding,” he says. “The quality of fish between slow and active days is also very noticeable.  Smaller fish predominate on the slack days.”

Perhaps, but from the images Hrychuk has been sending me lately, it looks like his slow days are few and far between. “I caught upwards of  25 walleye the other day,” he says, “and most of the fish were between 20- and 24-inches in length.  I caught them dead jigging – hanging a Jigging Rap. The highlight of the trip was a 31-inch walleye that I caught six feet off bottom in 11 feet of water, right at the edge of the old river bank.”

Like the man says: When you’re ice fishing for walleye in prairie reservoirs, everything revolves around the river channel.