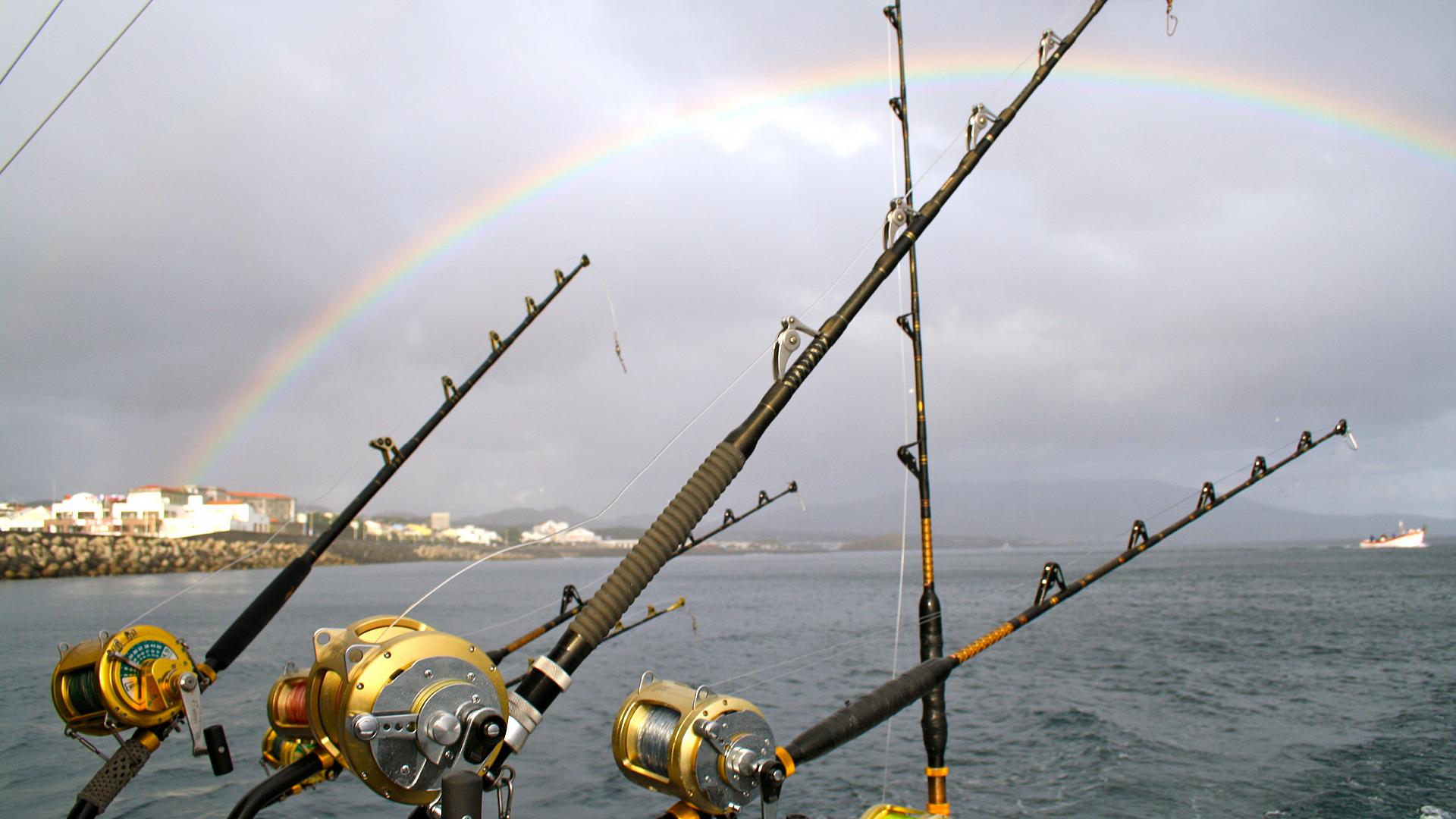 Why the Azores are so amazing, I (almost) didn’t mind getting skunked

The allure of the Azores

If you’re going to get skunked in an international fishing tournament, this remote archipelago is the place to do it

In the middle of the North Atlantic, 4,500 kilometres from home, I brace for the next impact. As the steel hull of our boat slams into the trough between huge ocean swells, a towering sheet of saltwater crashes into the cockpit, drowning out a chorus of Portuguese, Russian and, oh yes, English profanities.

So this, I think, is big-game fishing. For years I’d heard that going after tuna and marlin wasn’t much of a challenge, that one lounged around the boat until the mate handed you a rod and you cranked in your catch. It was less like fishing, they said, and more like using the elliptical trainer at the gym. Apparently, I heard wrong.

Well into the second day of these giant swells (above), I cleverly positioned myself at the front of the cockpit’s windward side, where I could watch the waves coming as I clung to a railing. After taking a few gag-inducing mouthfuls of saltwater the first day out, I had also learned to clamp my mouth shut, turn my head away and pull down the peak of my hood just before a really big dousing arrived. I could have turned around completely to take the brunt of the water on my back, but that would’ve meant relinquishing my death grip for a second or two—not a wise move with the boat already sliding up the next swell and gallons of tepid water sluicing around my ankles.

Tepid water? That’s right. Although I was frequently damp and occasionally uncomfortable thanks to the high winds and ocean swells, it was not one of those Perfect Storm situations. I was, in fact, trophy fishing in the agreeable subtropical climes of the Azores—that enchanting archipelago in the middle of the Atlantic. And so far, it feels like the adventure of a lifetime.

Or at least it will be if we can get a bite—especially since we’re competing in the Azores’ third annual Big Game Fishing Tournament.

A group of nine volcanic islands, sitting about two-thirds of the way between Newfoundland and North Africa, the Azores were totally uninhabited when Portuguese explorers discovered them in the mid-1400s. The islands were colonized by waves of immigrants from Portugal who, over time, developed a unique culture owing to their isolation from mainland Europe. Adding to the mix was the influence of mariners from every corner of the earth who, in the age of sailing ships, stopped at the islands to stock up on provisions while crossing the Atlantic.

Today, the Azores are officially an “autonomous region” of Portugal, and thus part of the European Union. And unlike many exotic places where you can pursue big-game fish, the islands are safe and prosperous, and they boast every modern comfort. You can even fly direct from Toronto to São Miguel, the biggest and most populated island, in just four and a half hours.

But here’s the really important part. Thanks to the Azores’ extraordinary topography, the surrounding ocean is one of the world’s top big-game fishing destinations. The islands’ banks and coastlines sustain massive quantities of baitfish, most notably sardines, making it a key destination for migratory pelagic species that cross the Atlantic every season. That includes mighty blue marlin, which average 500 pounds here, along with white marlin. There’s also bluefin, bigeye and yellowfin tuna (below), as well as smaller but still very sporting albacore tuna, wahoo and dorado.

Even better, the fishing is only a few kilometres from the port of São Miguel’s biggest city, Ponta Delgada. This is nearly unheard of. In most prime big-game destinations, catching billfish and tuna means a long run offshore—at least a couple of hours, and sometimes four or six—just to get to the fishing grounds. But because the Azores are tiny volcanic islands spearing out of the depths, they’re surrounded by water that’s more than 3,000 feet deep. From April to October, it’s possible to begin trolling your spread of lures and catch fish weighing hundreds of pounds just minutes outside the breakwater.

So, as you can imagine, I was pretty excited to arrive on São Miguel in mid-September last year to participate in the tournament. Featuring three days of fishing, plus tours of the island and a final-night gala, the competition drew teams of anglers from the U.S., France, U.K., Russia and mainland Portugal, along with several local teams.

Judging by the truly impressive results from the tournament’s first two years, the prospects for catching fish were very promising. In 2012, for example, 11 boats landed 15 blue marlin and a mako shark. In 2013, the same fleet boated a stunning 27 bigeyes, plus a white marlin and an albacore. Given the healthy fish populations, typically calm seas, and air and water temperatures in the mid-20°C range, the Azores are clearly one of the best places in the world to catch a truly large fish.

Or at least they usually are. I had the misfortune of landing in Ponta Delgada about six hours before an atypical fall weather system arrived. It brought days of grey skies, heavy winds and six- to 12-foot swells that came rolling all the way across the Atlantic to crash into the volcanic shoreline of São Miguel (above). The best way to catch marlin and tuna is by fast-trolling a spread of live bait, dead bait and rubber-skirted artificials (below). But with the seas whipped into a froth, and the foot-long baits surfing up one swell and down into the next, there was little chance even the most alert and saucer-eyed fish would spot them.

The tournament had to go on, of course, even though we all knew our chances of success were slim to none. In hopes the weather would change, the organizers juggled the schedule, having us take a day or two off from fishing. Instead, we toured the island’s rolling green hills, peered over jagged black cliffs, checked out a volcano and ate vast quantities of outstanding local food (see “Azores attractions”). But the weather did not change.

Eventually we took to the water again, trolling up and down the coast, from 8 a.m. to 4 p.m. (below). Sometimes conditions eased enough that I could relax, take photos and swap stories with the crew and other anglers. Other times, I just clung on and tried not to get sick. For two full days, none of the dozen boats in the 2014 tournament had a single hit.

Finally, in the closing hours of the third and final day of competition, one boat landed a 228-pound yellowfin (below, right). And a short time later, they were edged out by a local team that hauled in a 235-pound bigeye (below left), caught by jigging a live mackerel just outside the marina in only 200 feet of water.

So the final tally for the tournament’s 12 boats was a collective 288 hours on the water for just two fish. But what fish they were. I also prefer to take the view that our boat didn’t post a goose egg in the tournament, so much as finish in a 10-way tie for third. All things considered, I’d declare the 2014 tournament a resounding success in the areas of fellowship, embrace of local culture and international good cheer. Just not the fishing.

But all was not lost. To no one’s surprise—at least no one familiar with Murphy’s Law, sportfishing travel and irony—the days following the tournament were sunny and hot, with no wind and seas like glass. Since a few other outdoor writers and I had a couple of spare days before flying home, our hosts arranged a half-day charter for us aboard Seazores, one of the tournament boats. In a few hours, each of us had washed off the stench of skunk by landing hard-fighting, snaggle-toothed barracuda on light tackle (below) .

And Clive Bradley, an expert bank angler from the U.K., got to feel—for the first time ever—the power of a true marine speedster by tussling with a freakishly fast and strong 10-pound Atlantic bonito (below). A close relative of tuna, bonito are excellent eating, so we kept his fish, along with one ’cuda.

Back at port, our skipper traded the fish to the marina restaurant in exchange for a lunchtime feast. Along with preparing some of our fish—the rest became the resto’s featured special—the chef loaded us up with side dishes and gallons of Azorean vino, all at no charge. I’ve eaten a lot of fish in a lot of places, and I still consider the classic Canadian walleye shorelunch as the height of global seafood cuisine. But laying into that mouthwatering, perfectly cooked bonito while sitting on a sunny patio by the sea with new Azorean, American and English friends, was an awfully close second.

I live in southern Ontario, where the only saltwater for hundreds of kilometres is in aquariums and pasta cookers, but I love ocean fishing. Although I only visit saltwater a few times a year, I feel strongly drawn to the ocean’s power and mystery, not to mention its varied, large and plentiful finned occupants. And I harbour a deep desire to, if not personally catch a billfish or large tuna, some day at least see one of these amazing creatures up close.

This time, however, it was not be. I certainly tried, and got bruised, chapped, soaked and wind-burned in the process. So that was good fun. And I spent the days in between experiencing the good life on the green and gentle island of São Miguel, among some of the most generous and hospitable people I’ve ever met. Obrigado, meus amigos.

If I had to travel 4,000 kilometres to experience a freak storm and catch only one fish—a fish that weighed 495 pounds less than I’d hoped for—I can’t think of a finer place to do it.

Associate editor Scott Gardner hopes to one day return to the Azores for a second chance.

Along with sportfishing, other activities that draw tourists to the Azores include diving, whale watching, hiking, golfing, canyoning and surfing (the European Junior championships were taking place while I was there in 2014). Natural attractions include sand beaches, stark cliffs, waterfalls, crater lakes in extinct volcanoes and steaming, roiling sulphur springs. With its graceful 18th-century European architecture, mosaic-cobbled streets and lively cafés, the city of Ponta Delgada is perfect for exploring on foot. And almost everyone I met spoke English that ranged from good to excellent—often in response to my badly accented Portuguese greeting.

The local cuisine is also a big draw. It’s said the Azores is home to more cattle than people, and I believe it. Cows dot every hillside in groups of 10 or 15, contentedly munching on grass. The fresh beef, butter and cheeses were succulent, and the local bolo lêvedo bread was so good, I smuggled home three loaves. And practically by law, every visitor must try a heaping portion of São Miguel’s most distinctive dish: cozido (below), a hearty stew slow-cooked underground by geothermal heat. I had two platefuls.

Learn more about the Azores at www.visitazores.com.