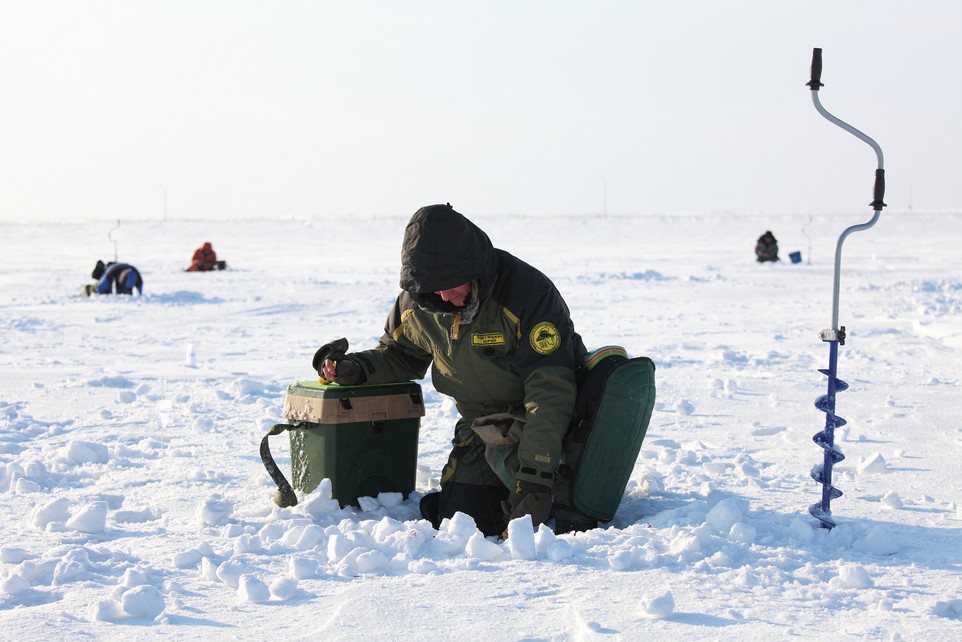 Its reputation as a world-class fishing destination is eminently deserved, but when it comes to ice fishing, B.C. is so far off the radar it’s even overlooked by many resident anglers. That’s understandable, considering the province’s own tourism hype emphasizes mild winters, rainforest adventures and January rollerblade jaunts around Stanley Park.

Still, that’s really only true for the Lower Mainland, parts of Vancouver Island and some of the smaller Gulf Islands—areas that total less than two per cent of the province. In the rest of B.C.’s 944,735 square kilometres, however, winter grips the land from November through March. Snow blowers are hot sellers.

And so are ice-fishing rods.

For those in the know, B.C. has no end of ice-fishing opportunities, most of which are easily accessible without the need for snowmobiles or quads. And in the southern half of the province at least, it never gets terribly cold, making for a comfortable day on the hardwater. Perhaps best of all, there’s plenty to catch and little angling pressure. Here’s the drill on B.C.’s three most popular fish to haul through the ice.

B.C. boasts some 200,000 waterbodies, give or take a few, and most are in parts of the province where lakes freeze in time for Christmas. Many have populations of gamefish, mostly rainbow trout, which are native to waters west of the Rockies. Some lakes with sensitive stocks have closed seasons, but there are plenty that allow fishing year-round.

The Freshwater Fisheries Society of B.C. annually stocks more than 800 waterbodies, typically those that are most accessible by road. During the 2012–13 stocking period, the group released over nine million young fish into the province’s waters. The iconic rainbow trout made up 48 per cent of that number, while kokanee salmon accounted for 46 per cent. Eastern brook trout, which do exceptionally well in B.C. lakes, made up another four per cent, with lake and cutthroat trout rounding out the total.

Many of the stocked lakes are easily accessible during winter via cleared roads; some of the larger lakes even have resorts offering a range of services. If you prefer a DIY experience, many more have no services at all.

Whatever the case, all the stocked lakes have substantial populations of rainbows. These range from pan-sized fish in the tiny high-elevation lakes to trophy-class bruisers in the larger lakes at lower elevations. And while the fish tend to be less aggressive than they are during summer, they can still provide an exciting day on the ice.

To ramp up interest in fishing a notch, especially among hardwater anglers, the province has also been focusing on another native gamefish over the past several years. While rainbows remain the mainstay, retired provincial fisheries biologist Brian Chan points to kokanee salmon as one of the most exciting sportfisheries now being developed by the province.

“It’s really family-focused,” Chan says of kokanee fishing. “The use of non-reproductive stock has really opened up a lot of fishing opportunity, in particular for ice fishing, where you don’t need a boat, downriggers and all that.”

According to Chan, all you need to do is walk out on the ice, look where everybody is fishing and that’s where you’ll find the school. “It’s a very social fishery and people are happy to give information,” says the unofficial ambassador for B.C.’s recreational fishery.

Landlocked sockeye salmon, kokanee occur naturally in a number of B.C. lakes, but their current distribution is far more widespread than ever before thanks to the stocking efforts, as well as to the hardiness of the fish themselves. “The kokanee will survive in lakes where rainbow trout won’t,” says Mike Ramsay, the Cariboo Region’s fish and wildlife section head.

For example, the province will stock kokanee in lakes that have species such as redside shiners, which compete with rainbows but not kokanee for food. The kokanee are stocked when they weigh just five grams, and they’re about two and a half years old by the time anglers start catching them. “We end up taking a lake that has a marginal rainbow fishery and turning it into a lake that has an exceptional kokanee fishery,” says Ramsay, himself a die-hard kokanee angler.

In the Cariboo Region, a lot of trout anglers have actually converted to fishing for kokanee rather than rainbows. Take Chimney Lake. It used to see roughly 250 angler days during the winter when it only had rainbow trout. After it was stocked with kokanee in 2008, it climbed dramatically to 6,000 angler days.

“Some people are kokanee fanatics, so we give them more places to fish,” says Ramsay. “Sometimes, we’ll have 80 or 90 fishermen on the ice, but when a school comes through, they can limit out in 15 minutes. It’s amazing. There can be a couple hundred fish bouncing out on the ice at any one time.”

In northern B.C., where rainbow trout share the winter limelight with lake trout—as well as walleye and northern pike—ice fishing offers somewhat more of a challenge. For starters, it’s extremely cold, with temperatures often holding at -30°C. This is not only potentially harmful to anglers, but also to any fish they catch through the ice and hope to release.

“There’s some great lake trout fishing all the way through northern B.C. right up into the Yukon, with many spots producing fish in the 15- to 20-pound class,” says Scott Stewart (pictured above), a hard-core ice angler from Prince George. “The problem is that when it’s -30°C and you haul them out of the water, their eyes, skin and fins instantly freeze up. They’ll glaze right over.”

The other handicap is the combination of short days and long distances you need to travel to reach the prime waters. Stewart, who counts lakers as his favourite winter fish, says that some of the lakes he fishes are well off the paved road. “Even if we leave the house at five in the morning,” he says, “we miss the prime morning bite and all we get is the afternoon and maybe a bit of the evening before we have to head back out.”

One way around this dilemma is to follow the lead of Stewart and his fellow ice-fishing buddies: bring along winter camping gear and stay out overnight on the ice. This allows you to hit the prime bite late in the day as well as early the next morning.

And because Stewart and crew fish in tents when it gets too cold outside, the fish don’t freeze up before they’re released.

“There’s nothing short of this being the best thing you’ve ever done,” he says, “sleeping right out there on the ice.”
Of course, it’s not essential to overnight on a frozen lake under the northern lights to experience B.C.’s great hardwater fishing. Families that just want to enjoy a relaxing day outdoors in the fresh air can also bring home a couple of fish for dinner.

“There are waterbodies with good fish populations—be it rainbow, kokanee or brook trout—that receive very little pressure,” says Brian Chan. Of the 800 lakes that the Freshwater Fisheries Society of B.C. stocks each year, just 250 or so get the lion’s share of fishing effort—and that means there are many untapped opportunities out there.
Now, where’s that auger…

Partly because they grow quickly and partly because they’re aggressive feeders after freeze-up, eastern brook trout also rank high with B.C.’s hardwater anglers. All regions of the province have lakes with brook trout as a result of ongoing or discontinued stocking programs. And where the non-native fish are still stocked, the lakes see heavy use in the winter. “Brook trout, like kokanee, are an excellent winter fishery,” says retired provincial fisheries biologist Brian Chan. “They’re more willing to bite than rainbows. And like kokanee, they’re superb eating.”

Sold on the idea of hitting the hardwater in B.C.? Here are some great spots to fire up your auger and get jigging. And along with the sportfish listed here, tasty burbot are also in most lakes.