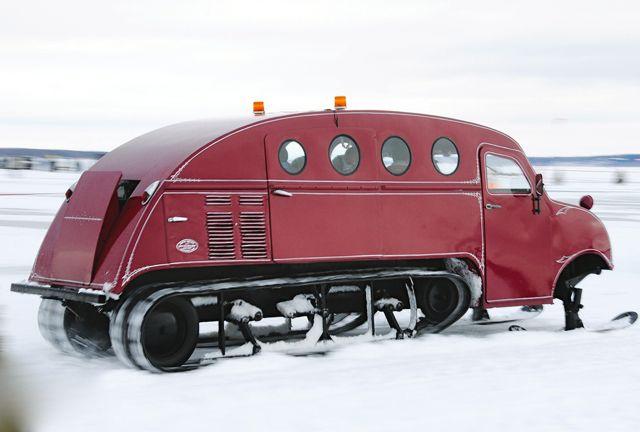 Rural Canada in winter can be an unforgiving place, especially when you’re travelling out in the elements. Back in the 1920s and 1930s, for example, you had to travel by horse and cutter if you wanted to get anywhere locally—even if you had a car, the roads weren’t plowed. So it was that Quebec mechanic and inventor Joseph-Armand Bombardier set out to design a vehicle to travel on snow, his drive brought on by personal tragedy—his two-year-old child died in 1934 after his family couldn’t reach a hospital in time.

In 1937, Bombardier launched the B7, a seven-person wooden vehicle with tracks on the back and skis in the front. Four years later, he unveiled a longer, more aerodynamic machine—the B12. The first buyers were country doctors, ambulance drivers and priests in remote areas. The market then expanded to retailers, transportation and utility companies, mail carriers, forestry operations and, eventually, outdoorsmen.

Looking like a giant beetle against the stark snowy environment, the B12 (above) has become an icon of the outdoors. While production stopped in 1951, many of the vehicles are still being used today by commercial fishermen in Manitoba. They also remain quite popular with ice-fishing outfitters on Ontario’s Lake Simcoe and other hardwater hot spots in Quebec.

Why the appeal? With a 12-person capacity, the B12 is perfect for groups of anglers who understand that getting out on the ice can be almost as enjoyable as what happens once you get there. Over the hum of the machine’s powerful six-cylinder engine, anglers can discuss strategy on the way out, and compare fish tales on the way back. You can’t do that when everyone’s on roaring snowmobiles or ATVs. Think of it as yet another communal outdoor experience—a snowbus ride to icy adventure.

Managing editor Bob Sexton has enjoyed several memorable journeys aboard A B12.