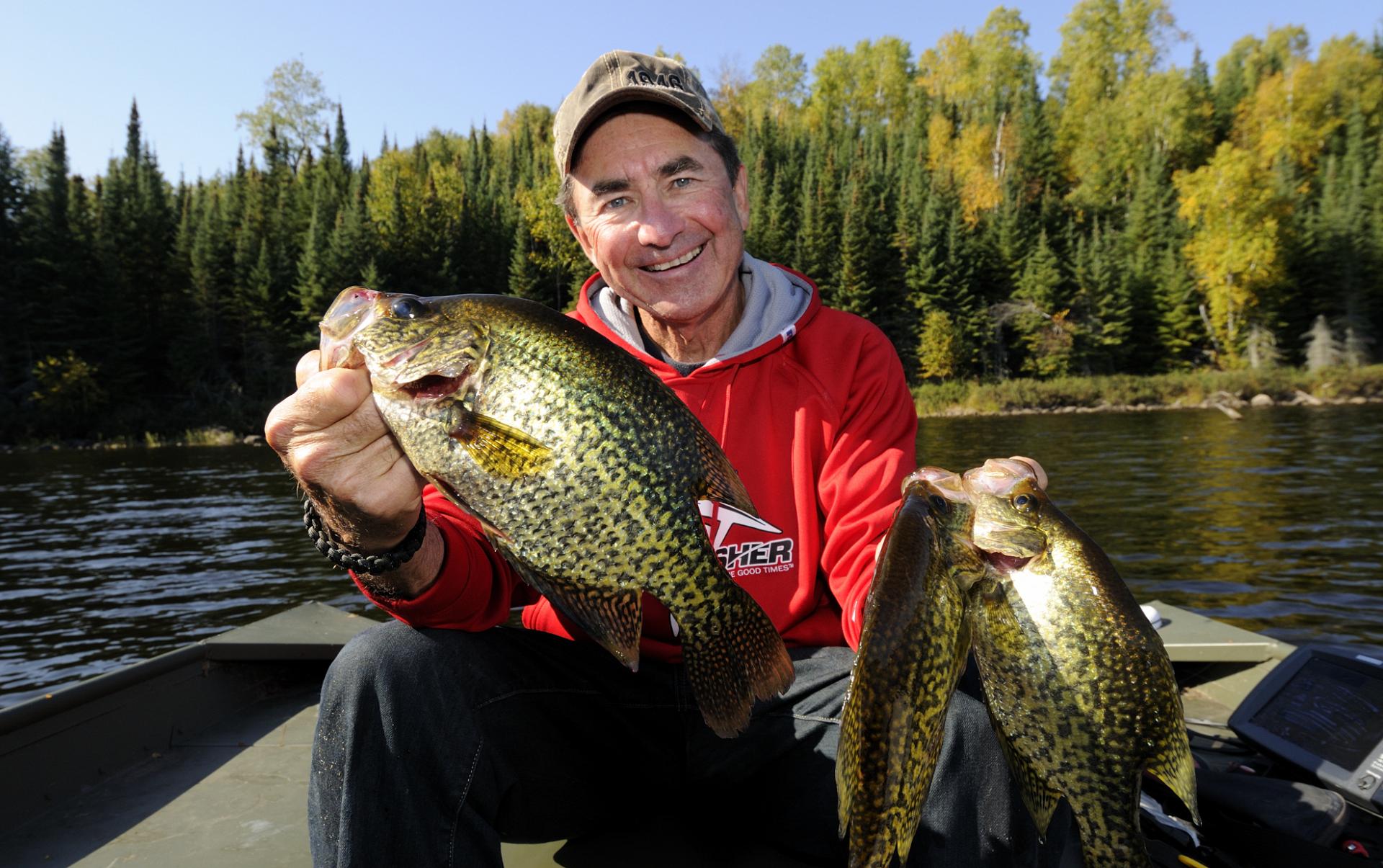 Why crappies are made for sonar

One of the questions I get asked a lot is … what is your favourite fish?

And I always reply the same way … the one that I am currently fishing for!

While I love chasing smallmouth bass, walleye, muskies, northern pike, lake trout and salmon, I am just at home fishing for yellow perch, carp and black crappies.  Which is why I am always amazed when folks turn up their noses at one species or another.

I am reminded of this as I relax, having spent the past couple of days angling for a true mixed bag of fish, with friends Mike Sarr and Dave Rowekamp.

Mike is a surgeon at the Mayo Clinic in Rochester, Minnesota and for the past couple of seasons he has visited Kenora to participate in a seminar with the surgeons in Northwestern Ontario.  He is also an avid angler and hunter, and I’ll never forget the first time we went fishing together.  We both chuckle about it today, because when Mike hopped into the Kingfisher and I asked him what he wanted to fish for, he replied, “If I wasn’t here, what would you go after?”

To make a long story short, Mike caught a beautiful smallmouth approaching four pounds on his fifth or sixth cast and it was uphill from there.

The other day, however, as typically is the case in the fall, when the fish start bunching up in huge aggregations, we caught fish hand over fist.  And get this, the walleye, sauger, yellow perch, crappies, smallmouth bass and pike were all schooled up together.  In fact, at every spot we stopped, when one of us hooked a fish, it was a coin toss as to what specie it would be.

So, for the fun of it on the second day we decided to specifically target black crappies.  And as always it was a lesson.

Indeed, I’ve constantly harped on the theme that if you want to hone your sonar skills for any species of fish—chase crappies. 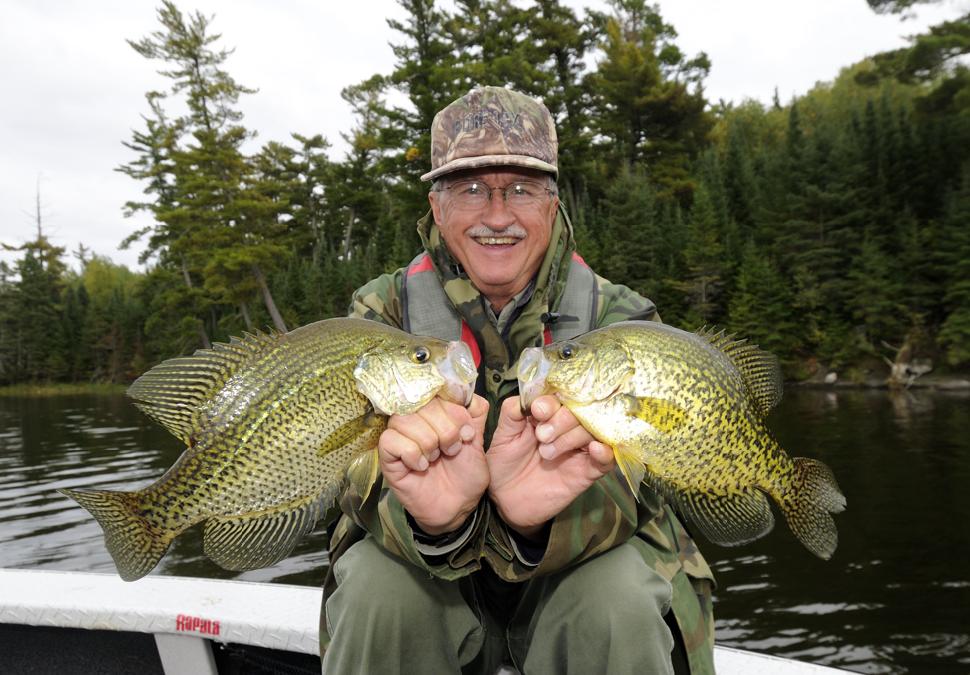 The reason that crappies are “made for sonar” is because they don’t have Type-A personalities.  Oh, for sure, the odd time you’ll find them in an aggressive, all out chasing mood, but most days they’re laid back, good old boys.

Which is how Mike, Dave and I found them the other day. After I circled around with the Humminbird zoomed in, we spotted several gorgeous bean-shaped blobs hovering a foot or two off the bottom.

I pitched out a marker buoy to pinpoint the spot and before I could drop the trolling motor into the water, Mike boxed a pair of beauties.

“Well, this is starting out the right way,” I said to the boys.  Then, Dave hooked a slab and I quickly followed suit.  But after that the action slowed down noticeably, even though we could see the fish on the sonar screen, suspended below the boat.

That is when I started changing up presentations and watching on the sonar screen how the fish reacted first to a colourful jig with a contrasting chenille body and soft plastic dressing.

Almost immediately, I felt …thud … and swung a 16-inch slab that had swallowed the jig into the boat.  It was something I had seen many times before.  The crappies were eating the jig better than a live minnow.

That was the signal to try jigging a small spoon, a totally overlooked fall crappie technique that has worked wonders for us in the past.  Only this time, the crappies wanted nothing to do with it.

In fact, watching them on the bow mounted sonar screen, they wouldn’t move an inch – not even a flinch – to inspect the fluttering spoon.

Deciding to slowly scan the shoreline for another school of crappies, we moved about a quarter-of-a-mile down the shoreline until we marked the tell-tale Christmas tree shape of a big school of slabs suspended almost ten feet off the bottom.

My heart always skips a beat when I see these bean trees but as I mentioned to Dave and Mike at the time, as a general rule, the closer you can find fall crappies relating to the bottom the better the overall action.  And these high fliers were suspended almost in the middle of the water column.  So, it was a good news / bad news proposition.

Well, more bad news than good, because we couldn’t pluck a single fish from the suspended horde.  They just finned there, looked at our baits and kept their mouths closed.  Which was our signal to leave the high fliers and continue hunting for bottom huggers. 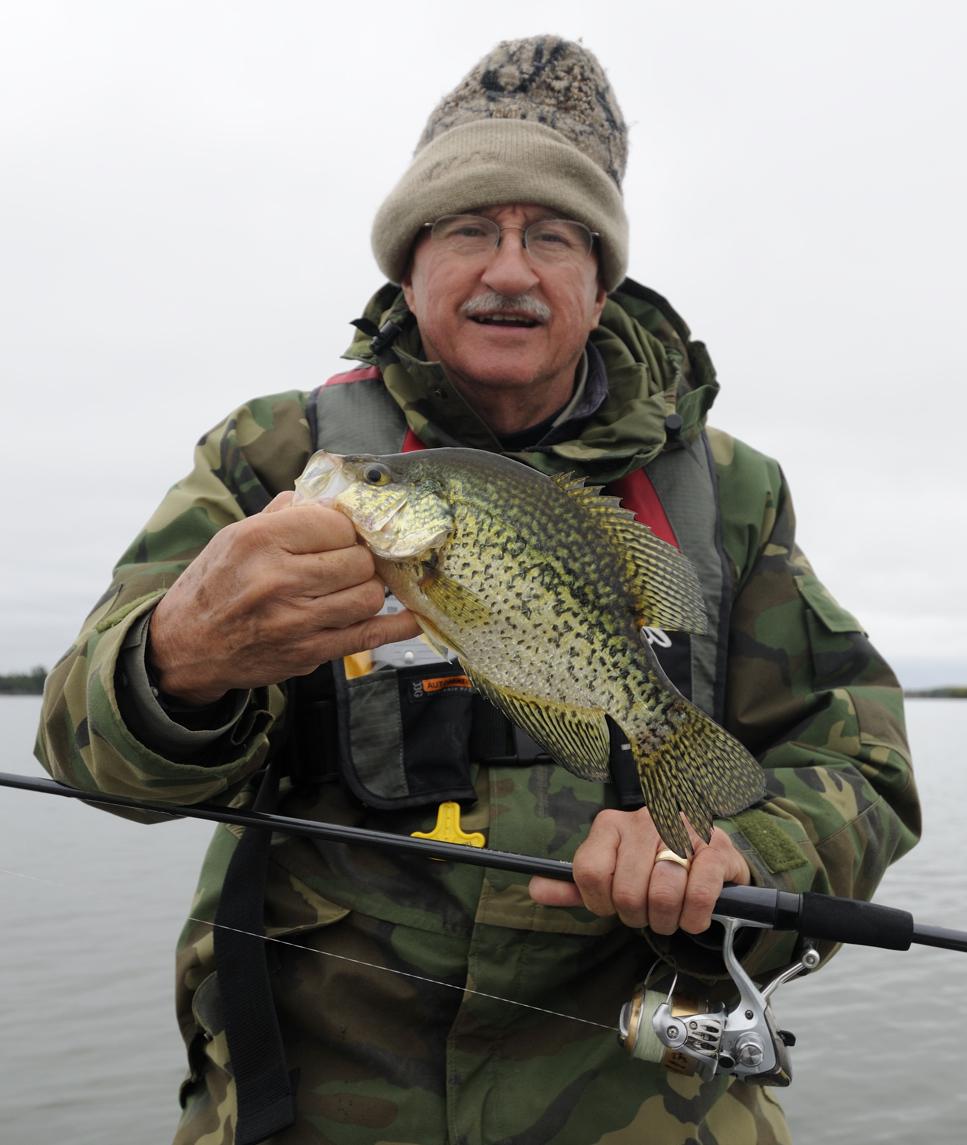 Eventually, we found more crappies relating to the bottom and Dave almost immediately caught what was likely the biggest slab of the day, followed by one of mine almost as big.

And in a few short hours we enjoyed some truly spectacular slab crappie action that could only have resulted from paying super close attention to sonar screen and reading the mood of the fish.

It is why crappies were made for sonar.