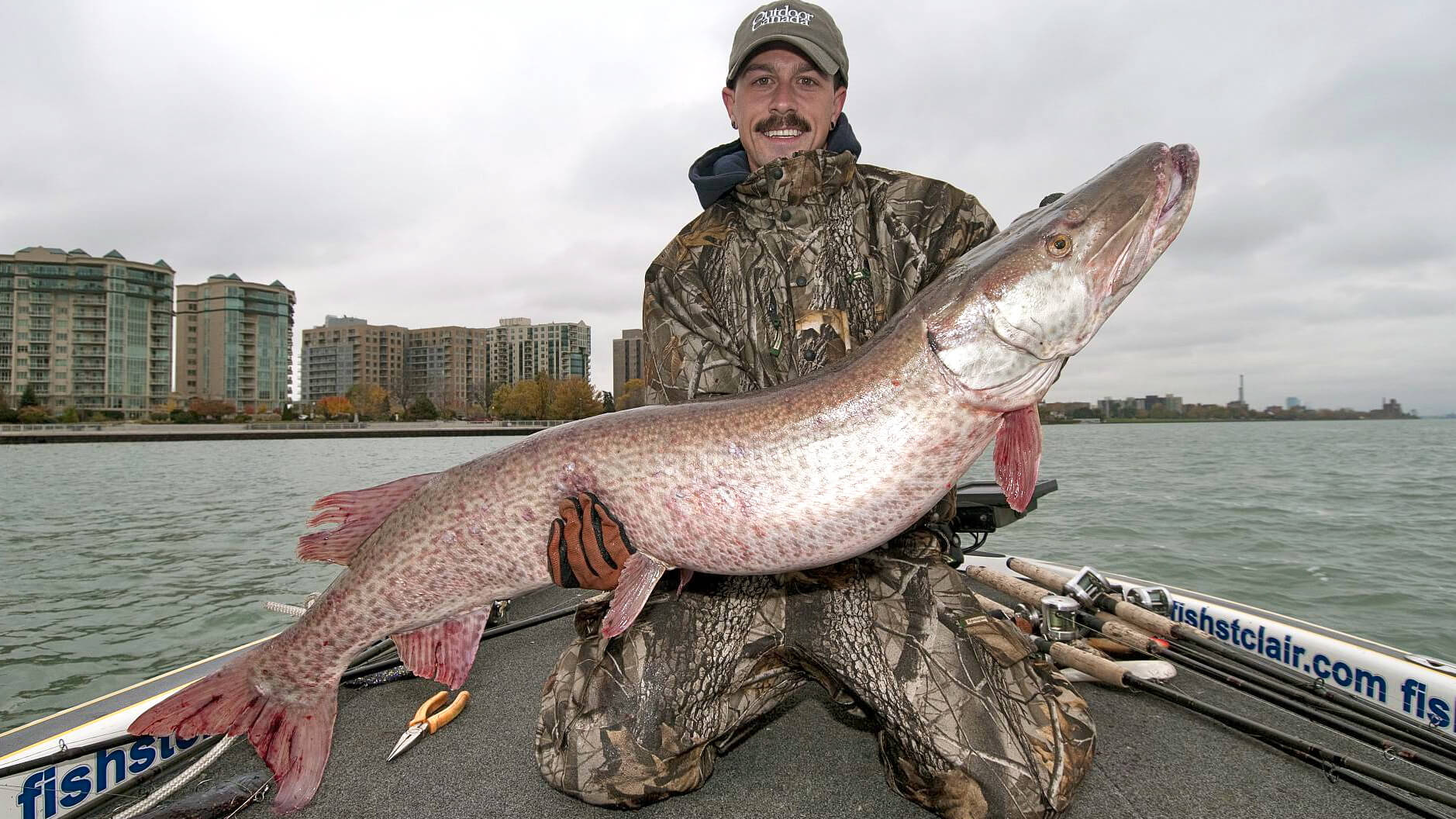 The fine art of surfacing

There’s nothing more exciting in all of freshwater fishing than watching a tsunami-like wave roll in behind your topwater bait just before a mammoth muskie crushes it in an explosion of water. It’s the stuff of dreams for every angler who pursues toothy predators.

But aren’t topwaters the 10 per cent solution, working only when the stars are properly aligned and the conditions are just right? Not a chance. I interviewed four of Canada’s top muskie experts and they were unanimous: there’s no wrong time to tie on a surface lure to land these King Kong critters.

“You have a better chance of catching a giant muskie on a surface lure than on anything else,” says famed Ottawa River muskie guide John Anderson. “If you threw only topwater lures, you’d catch fewer fish, but they’d be much bigger.”

Don Pursch owns Nielsen’s Fly-In Lodge on northwestern Ontario’s spectacular Rowan Lake, one of the few fly-in muskie waters on the planet. He chuckles when I say he must have peeked over Anderson’s shoulder to read his notes. “Surface baits are so effective, I always have someone in the boat throwing them,” he says. “They play to the nature of the fish. Muskies are curious and surface lures are their demise.”

Pursch says he’s had muskies track topwaters in three-foot waves with their backs fully exposed. At the same time, he says, topwaters are tremendous search baits, making them ideal for budding muskie anglers who may not be the most proficient casters.

Then there’s legendary muskie guide Gord Bastable, owner of Eagle Lake, Ontario’s Vermilion Bay Lodge. He says the biggest mistake a muskie angler can make is to pigeon-hole the use of surface lures to just a few top times. “As the apex predator, muskies are well aware of everything that is going on around them,” says Bastable. “And this includes the water/air transition.” He’s found he can trigger the least aggressive fish to follow a surface bait when all other presentations fail.

Anderson agrees, adding that topwaters are best coming out of the bullpen, rather than starting the game. He begins most days casting lures such as jerkbaits, glide baits and blades. If he raises a fish and doesn’t catch it, however, he’ll follow up and seal the deal with a surface lure. As a clean-up bait, Anderson says, topwaters have few equals.

Bastable is quick to point out that anglers can manipulate super-size surface baits better than almost any other lure to imitate an animal in distress—something big toothy predators find impossible to ignore. Better yet, he says, you can fish topwaters in and around prime muskie structure and cover, such as thick weeds, shallow reefs, flooded timber and jagged rocks that are difficult to probe with other baits.

“That is definitely true,” agrees southeastern Ontario muskie stick Wally Robins. He stresses, however, that you should also occasionally cast topwaters over deeper water. Robins bases this on his own experience on the Rideau and Ottawa rivers, where soft, silvery forage fish such as mooneyes offer muskies a substantial meal. Since pelagic mooneye typically swim 30 feet down in the water column, Robins will throw a Poe’s Jackpot or TopRaider out over the deep water, away from shallow structure or cover, about every third or fourth cast.

Same goes for when Robins is fishing in current. “I love back eddies with a passion,” he says. “Current seams and current breaks are moving buffet tables for the fish. They can tuck up and wait for the chow to come to them without expending a lot of energy.”

If you’re getting the impression our four gurus think outside the topwater box when it comes to catching muskies, guess how they retrieve their surface baits. Quickly, right? Wrong.

“Most muskie anglers have two speeds when it comes to retrieving lures: fast and really fast,” says Anderson. “But I have much better results when I fish surface baits far slower than the more conventional muskie lures.”

Pursch agrees. “When you’re retrieving a surface bait for muskies, don’t overwork it. The fish know it’s there,” he says, noting that two of his favourite lures are the Whopper Plopper and an ancient Pflueger Globe. “I like the old Globe because the blades aren’t fixed on it. They just tinkle every now and again.”

For his part, Bastable is a big believer that muskies—like smallmouth bass—can’t help but hit a slowly moving, or even stationary, surface bait. “They’re like the chocolate Lab that can only stand looking at the forbidden treat for so long before it has to act,” he says.

Several years ago, for example, Bastable cast out a Poe’s Jackpot over a shallow reef, letting it sit while he adjusted the boat motor. Suddenly, there was a big splash. “The muskie was obviously sitting on top of the reef and the sight of my surface lure was too much to resist.”

As for Robins, he lets the fish determine the speed of his retrieve. “My retrieve is 100 per cent based on my assessment of the muskie mood that day,” he says. “If the fish are amped up and moving, I’ll retrieve the bait quicker. But if they’re lazy and turned off, I slow down.”

If retrieving a surface bait slowly is the name of the game, how does the style of the lure fit into the equation, particularly the likes of Poe’s Jackpot and Phantom Lures’ Viper with their side-to-side wobbling action?

“Your hooking percentage is very low when you use a surface lure that walks back and forth way out to the sides,” contends Pursch. “When a big muskie opens her mouth, all she’s trying to do is suck in your lure. That’s a lot of muscle trying to move from one side to the other.”

As a result, Pursch is a firm believer in making it easier for the fish by retrieving lures in a straight line, not swinging them wildly out to the side. “When I’m using a walk-the-dog style lure, I just rock the nose back and forth, not the entire bait,” he says.

On this point, Pursch gets no argument from Anderson, who admits he generally avoids using walk-the-dog style surface baits to attract and trigger big muskies. “It’s not that you can’t cast out that lure style and attract muskies, because they do it wonderfully,” he says. “It’s just that I’ve recorded more strikes on baits that I can retrieve in a straight line, rather than lures that zigzag wildly off to the sides.”

Anderson, who has a degree in fisheries science, has also carefully studied the different sounds and vibrations that topwater lures make when you hop, pop, buzz and scurry them across the surface. He’s as certain as I am that sound and vibration are also key to successful muskie fishing. “A fish can pattern sound much more easily than it can sight,” he says, which can have both positive and negative consequences when it comes to catching the beasts.

Listening to Anderson, I recalled a discussion I once had with the late fisheries scientist Ed Crossman and one of his doctoral students, Bernard LeBeau, who had been radio-tagging and tracking large muskies in northwestern Ontario’s Wabigoon Lake. One time while LeBeau was monitoring a particularly large muskie relaxing in a remote bay, a boat arrived on the scene. Before the anglers had even drifted to a halt, the muskie was already swimming out of the bay, having recognized the sound and vibration of the outboard motor from a previous negative experience.

Anderson applies this same logic to his lure selection. “A lot of muskies have heard a TopRaider over the years,” he says of one of the most popular topwater baits of all time, suggesting some fish might associate it with danger. “That’s why I typically choose something like a Big Mama Dirdy B or Twis’td Sis’tr. They’re bigger profile lures, make more noise, throw more water and offer the fish frequencies they’re not likely to have heard before.”

It can be unnerving when that wall of water boils up behind your topwater bait, with a giant muskie in hot pursuit. And even if you manage to remain calm, you’re still left with the nagging reality that topwaters are the toughest lures for fooling a muskie at the side of the boat with a figure eight.

“The worst thing you can do when you spot that wall of water is to slow down and make it easier for the fish,” Robins says. While it might be your natural reaction, it’s the quickest way to make the muskie lose interest.

Instead, Robins says to play cat and mouse with the follower by slightly speeding up the retrieve. “If that doesn’t work, I’ll go back to my regular cadence, keeping the bait just out of reach, trying to get the fish so wired up that it’ll crush it,” he says.

Robins is quick to point out you should never assume a muskie will explode ferociously on a topwater lure. At least half the time, he says, the strike is instead akin to a pint-size bluegill sucking an insect off the surface. “The temptation is to make a half-assed hookset when you see that little boil on the surface,” he says. “With surface baits, you have to discipline yourself to set the hooks hard every time.”

According to Pursch, meanwhile, many muskie anglers get themselves into trouble long before they even see a following fish. He says they become entranced watching their lure wiggle and dance on the surface when they should be looking behind and below it. “If you don’t spot the followers early and they suddenly explode on your lure, you’re going to suffer cardiac arrest,” he says.

When you do see a muskie following your lure to the boat, should you stab your rod tip under the water and trace out your oval or figure-eight just as you would with a conventional muskie lure, or should you keep the bait on the surface? “I always plunge my rod tip and get the lure off the surface and down under the water,” says Robins. “Maybe it’s just a comfort thing, but I love doing big circles with a prop bait, creating a bubble trail like a scuba diver. It is a lot harder with a walk-the-dog style lure, but I still get it down and figure-eight it like a jerkbait.”

Pursch says one of the biggest mistakes anglers make when figure-eighting is to cut the corners too tightly. “Remember, a big muskie might be 54 inches or more long and weigh 40 or 50 pounds,” he says. “You have to give the big girls room to manoeuvre.” He recommends making wide sweeping ovals with the lure, picking up speed in the turns, so the fish can follow it easier.

Again, though, the most important thing is to remain on red alert. Says Pursch: “You have to stay focused from your first cast in the morning to your last cast in the afternoon.”

And keep an eye out for that tsunami.

Ottawa River guide John Anderson says it’s critical to use a light, buoyant leader when fishing with surface baits for muskies. He favours a foot-long chunk of 100- to 150-pound-test fluorocarbon, either tying it directly to his lure or using a modest-sized snap. Anderson says too many anglers use the same reinforced, 200-pound-test metal leaders they favour for conventional muskie lures. But the heavy terminal connection weighs down the nose of most surface baits, reducing their buoyancy and their ability to throw water.

What could be better than reading about a pro muskie guide’s topwater tactics? Actually fishing with a pro muskie guide and learning even more. Here’s how to contact the expert guides included in this feature.