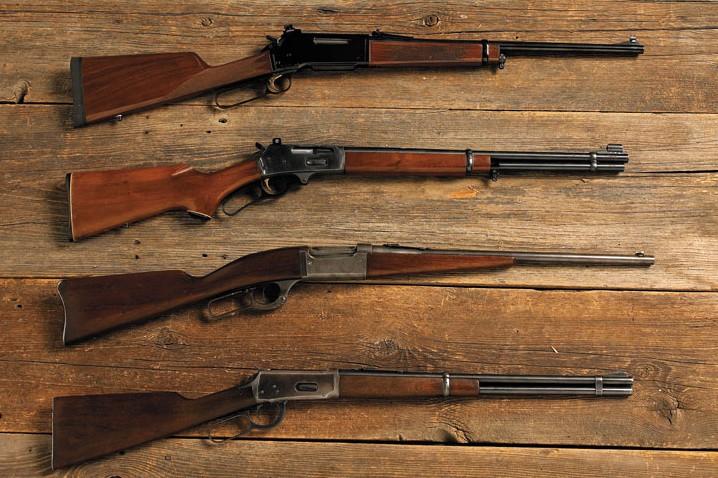 The legendary lever that shouldn't be overlooked

You’ll find them waiting patiently in the darkest recesses of a hunter’s gun cabinet. Invariably, much of the bluing will have been worn away with time, and the stock’s patina will further betray many years of reliable service. Unfortunately—and perhaps unwisely—most lever-action rifles seldom see much field time these days.

Widely regarded as “the gun that won the West,” and popularized by Hollywood stars such as John Wayne and a handful of hunting icons, including Teddy Roosevelt, the lever-action rifle is now considered by most as well past its prime. This when Winchester’s venerable Model 94 lever-action remains, to this day, the best-selling centrefire hunting rifle of all time-a fact now overshadowed by January’s announcement that Winchester is shutting down its Connecticut operation, and with it production of the Model 94.

The lever’s troubles began following the two world wars and the introduction of bolt-action rifles to hundreds of thousands of North American sportsmen. Not only were military rifles being customized to be used as sporting firearms, gun makers began developing accurate, attractive and affordable bolt—actions designed specifically with hunters in mind. A prime example was the Winchester Model 70.

The post-war period also saw an increase in the development and introduction of many new hunting cartridges, virtually all tailored to the properties of the strong and adaptable bolt-action. With those evolutionary steps came the end of the glory days for lever-actions, their popularity usurped by the bolt-action rifle and an ever-growing thirst for increased velocity and accuracy.

Still, there has always remained a cult-like following for lever guns and, more specifically, for a small handful of rifles built on the lever action. These include Winchester Models 94 and 88, the Marlin 336, 444 and 1895, and Savage’s classic Model 99. But this affection is certainly not based on nostalgia alone—these and other lever-actions continue to have a rightful place in the hands of hunters, offering clear benefits and advantages under many hunting scenarios.

Best in the bush

Aside from their classic good looks, lever-action rifles are extremely easy and convenient to carry, whether in the hand or in a scabbard, thanks to the flat receiver sidewalls. More importantly, though, they’re reliable, quick-handling and arguably unmatched for speed when it comes to reloading and getting off a second shot. Of course, the first shot with any rifle is all-important, and I won’t deny that quick follow-up capability, in inexperienced hands, could be a detriment. But for responsible, conscientious hunters, speed is a decided plus.

The esteemed .30-30, for example, is every bit as capable in the deer woods today as it was when Winchester first introduced the cartridge in 1895-the first sporting cartridge designed for smokeless powder. In many cases in heavy cover, where shooting distances rarely exceed 125 yards, deer hunters would be far better off with a fine lever-action such as the Winchester 94 or Marlin 336 than with most of the long-barrelled, magnum bolt-actions we see so many of today.

Relatively light, lever-actions swing quickly and smoothly, have mild recoil and perform on game far better than the ballistic tables might suggest. In fact, one of the primary reasons for the longevity of .30-30 lever guns is that they simply do a damn fine job when it comes to putting deer on the ground in a hurry-an important consideration when hunting in thick cover.

For those who hunt black bears, moose and even elk at close quarters, the “brush buster” lever-actions in .444 Marlin, .45-70 and .450 Marlin are also excellent choices, though far too often overlooked. While field experiments have demonstrated that these larger bullets don’t actually shoot through brush any better than most other calibres, there’s no denying their effectiveness on large animals if kept to the short ranges for which they were designed.

Those who say lever-actions are not desirable hunting rifles often argue they’re not as accurate as bolt-actions. Contributing to the reduced accuracy, they contend, are the two-piece stocks, rear-locking bolts, barrels cut to accom­modate rear mounts, and barrel bands used to secure tubular magazines and forearms to the barrel. I suppose there might be some truth to this, but in my experience, lever-actions are, in fact, quite accurate.

And while a typical bolt-action may shoot tighter groups off the bench at 100 yards or more, the biggest factors affecting accuracy are shooter skill and shooting conditions in the field. The fact is, if a typical hunter can hit a four-inch circle when shooting offhand at 100 yards, he’s doing well. Our abilities seldom equal the capabilities of our rifles, irrespective of the action we choose.

Likely contributing to the belief that levers are not as accurate as bolt-actions is that many of us naturally think of iron sights when we conjure up the image of a lever-action rifle. I, for one, certainly don’t recall the Duke ever bearing down on a guy in a black hat with a riflescope mounted on his Winchester. To maximize the potential for accuracy in lever guns, however, you must mount quality glass on them, just as you would with any bolt-action. It’s simply unfair to compare them otherwise.

Although scopes are not necessarily required for the short-range, quick-shooting these rifles are best at, I believe everybody shoots better, acquires a target more quickly and is more effective in low-light conditions when using a scope. Manufacturers and lever-gun enthusiasts recognize this, too, and today’s lever-actions are all drilled and tapped to accommodate rings and bases, much like virtually all other production sporting rifles. Then there’s the modifications to Winchester’s lever-actions. At one time, they featured a top ejection port, making it difficult to mount a scope. Today, however, they all have angle-ejects similar to the Marlins, eliminating this problem.

The other major criticism of levers is they’re simply not chambered for the high-velocity cartridges that are so popular among today’s hunters. On this score, it’s difficult to argue convincingly with the naysayers. The simple truth is that, for the most part, the selection of cartridges chambered in lever rifles is significantly narrower than what is available for bolt-action guns.

Certainly this is the case for modern lever-actions designed as close-range bush rifles, which includes the two most popular manufacturers of lever guns, Marlin and Winchester. Common cartridges available in these rifles include the traditional and predominant .30-30, along with the .45-70, .44 Magnum, .444 Marlin, .35 Remington and .450 Marlin.

While each has its own ballistic properties and practical hunting applications, it’s safe to say that none can be considered an effective big-game cartridge beyond 150 yards. Blame the tubular magazines, where the cartridges are stored tip to base. Simply, it would be too dangerous to load the pointed, spitzer-style bullets that now dominate the hunting marketplace-and optimize downrange ballistic performance. That’s because any sudden jarring could cause the nose of one bullet to strike the primer on the cartridge in front.

To eliminate this risk, then, only flat-nosed bullets can be safely loaded into a tubular magazine. That’s set to change, however, thanks to Hornady’s new Lever­Evolution ammunition, which features a pointed plastic tip that compresses in the magazine and springs back into shape once the cartridge is chambered.

As for today’s lever-actions chambered for high-velocity, flat-shooting cartridges, the Browning BLR stands alone. I’ve long found this somewhat puzzling, given the performance of the BLR. Extremely strong, with a well-earned reputation as a very accurate, fine-handling rifle, the BLR comes in both long- and short-action versions. One of my regular hunting partners has shot a BLR in .308 Win. for more than 25 years and swears by its reliability and accuracy. I can personally attest to having watched him take a large number of antelope, deer, moose and elk over the years with this rifle.

To overcome the inherent risk of accidental discharges associated with tubular magazines, the BLR features a detachable box magazine. As a result, the BLR is chambered for a full range of popular modern cartridges, from .223 and .22-250 all the way up to the .300 Win. Mag. and .450 Marlin, including the increasingly popular family of Winchester short magnums.

Regrettably, the wonderful Savage 99 is no longer in production, a victim of high manufacturing costs and waning demand. In its prime, the Savage 99 sported a rotary magazine (some later versions featured a detachable box magazine), allowing it to be chambered for a number of high-velocity, short-action cartridges, including the .243 Win., .284 Win., 7mm-08, .300 Savage and .308 Win. Determined buyers can still find 99s in excellent shape on the used market, and I’m always on the lookout for a nice one in .308 Win.

Sure, lever-action rifles are unlikely to ever again attain the popularity they once enjoyed among hunters. The status of the bolt-action today is both deserved and assured. In close-cover hunting, however, where quick-handling, fast-swinging, easy-carrying rifles are the best medicine, lever-actions are a viable and even preferred option. And when chambered appropriately, they can be equally suited to hunting in open country.

Then again, history suggests that popularity and styles are cyclical—if the bell-bottomed jeans and shoulder-length hairstyles emerging in my sons’ circles of friends are any indication, that may well be true. Winchester’s demise notwithstanding, it would also mean that the whispers I’m hearing in the hunting fraternity of a lever-action comeback may also come true. Actually, the term comeback is perhaps a bit of a misnomer: it suggests to me that lever-actions have gone away, when in fact there are literally millions of them still out there, sitting idle.

Just waiting for the chance to once again prove their mettle as superbly capable hunting rifles.

Stack pointed bullets into a lever-action’s tubular magazine and you risk the point of one bullet touching off the primer on the cartridge ahead of it. That’s pretty much relegated levers to using only flat-nosed bullets-and sidelined them when it comes to the modern spitzer-style bullets favoured by so many hunters. Until now. Hornady has bridged this evolutionary gap with its aptly named LeverEvolution ammunition, likely the most influential advancement targeted at lever-action rifles in quite some time.

So, how does this new technology work? Essentially, the bullets have soft plastic tips that deform when compressed, removing the risk of detonating the cartridges in front of them. Once loaded into the chamber, they immediately regain their original pointed shape.

The practical result of this technology is, in part, increased initial velocities. More importantly, though, is the significant improvement in downrange performance. Simply, greater ballistic coefficients equate to much flatter trajectories and hugely improved energy retention. For example, a 160-grain .30-30 bullet will see its drop at 250 yards cut by nearly half, with a corresponding increase in retained energy of roughly 50 per cent. Cartridges that were once effective out to 150 yards could now be viable out to 200 yards or more.