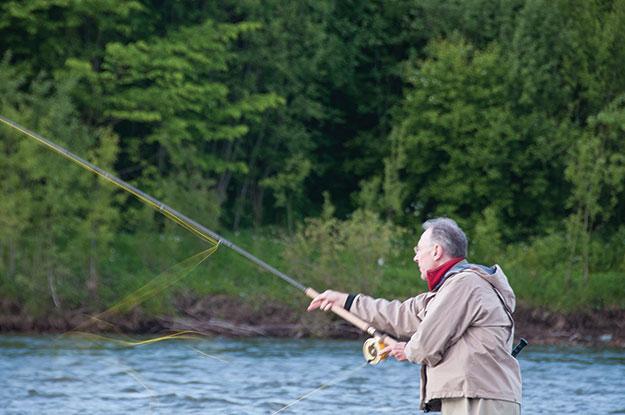 The St. Genevieve is a small salmon river on Newfoundland’s Great Northern Peninsula. Along one stretch, there’s a deep pool that drops off abruptly from shallow water a short distance from the shoreline. But with tall, thick, fly-stealing spruce tight to the water’s edge, there’s only room for an abbreviated backcast. And naturally, the salmon flee to the deep, dark depths of the pool once they see the silhouettes of anglers wading in the shallow water.

Nonetheless, one July day I found myself alone on the river and was able to hook fish after fish casting out to the edge of the pool, mere inches from where anglers normally stand in the shallow water. For that I can thank spey casting with my nine-foot 6-weight.

Spey casting? Isn’t that just for big West Coast salmon and steelhead rivers? Not at all. The truth is, spey casting can give you a decided advantage no matter where you fish. Indeed, the technique requires much less space behind the angler than traditional fly casting and, as a result, opens up many opportunities—as was the case for me on the St. Genevieve.

So, what exactly is spey casting? Named for the river in Scotland where it was developed in the 1800s, it is a style of casting that requires no backcast. Unlike the roll cast, which is slow with a deliberate pause between the backward and forward strokes, the spey cast is one fluid set of motions that produces wicked line speeds and very long casts—up to 150 feet with a long two-handed rod.

Also unlike the roll cast, spey casting allows you to redirect the line’s direction. For example, say your line is on the dangle, pointed downstream in the current and you need to cast it across the river. With conventional fly casting, you would need to false cast a couple of times until the backcast was lined up with the target. With spey casting, this is accomplished with the one smooth set of motions.

There are different spey casts—the switch, single spey, double spey, snap-T and snake roll, for example—for different situations, but they all form a D-loop lined up with the target, followed by the forward stroke. Each cast has a specific purpose depending on the direction of both the current and wind. The simplest spey cast is the switch, which involves no change in direction. Master it first and the more complex casts will follow naturally through necessity.

Also known as the dynamic roll cast, the switch is a straight in-and-out spey cast—all that’s needed for fishing in places with no current, such as a beach or trout pond. You simply pull the line back and upward, as you would in a roll cast, only faster and with enough momentum and energy to form a D-shaped loop behind you. The leader and tip of the fly line should be anchored in the water about half a rod length to your right, for right-shoulder casting, and a few feet in front of you.

The switch cast is fast and dynamic—apply the forward power just as you would in an overhead cast and watch it fly. When you finally hit the sweet spot, you’ll be amazed at how far you can cast with only a few feet of line behind you. It’s a beautiful thing.

And best of all, it will help you catch more fish.

Keen to give spey casting a try? I won’t lie, there’s significant learning curve and you really need to see it in action to understand how it works. So, along with reading more about the technique, it really helps to watch some instructional videos. With that in mind, here are some of the better clips we found online: www.outdoorcanada.ca/speycast.