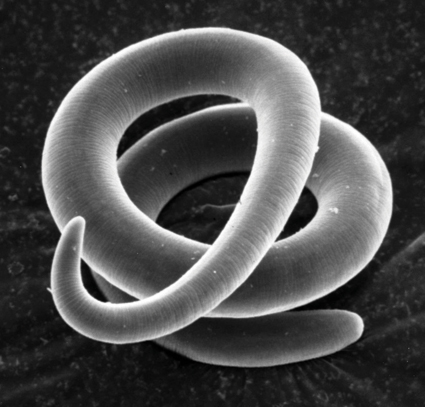 Pybus says she gets more phone calls from hunters each fall about moose measles than any other wildlife affliction. Moose measles is simply the common name for a tapeworm affecting wolves and moose, especially wherever the two animals coexist. The adult tapeworm resides in the intestines of wolves, and occasionally coyotes, dogs, cougars and bears; tapeworm eggs are shed in the feces of these carnivores. If the eggs or hatched larvae are ingested by a feeding herbivore, they migrate to muscles throughout the animal’s body. Upon reaching the muscles, these larvae enter a resting phase, remaining there until a carnivore consumes the flesh. The larvae then reactivate and develop into adult tapeworms inside their new host.

Though most often found in moose, the larvae occasionally show up in pronghorn antelope, mule deer and caribou. In moose meat, the larvae are easy to spot. While they can reside in any muscle, including the heart, the larvae most commonly settle in the hindquarters. Since this is where the majority of the choice cuts originate, it’s no wonder hunters react negatively when they see numbers of two- to four-millimetre round or oval yellowish-white cysts, highly visible in contrast to the dark red meat. Older moose are more prone to infection, with the number of cysts ranging from a handful to the thousands.

The good news is these larvae cannot infect humans, even if eaten raw. While unsightly, they’re killed by freezing or cooking the meat, and have no discernible impact on the flavour. Grinding infected meat into hamburger or sausages is a common method for dealing with aesthetic concerns.

Liver Blisters
Like moose measles, liver blisters are also tapeworm larvae. They prefer to settle either just below the surface or deep in the tissues of an animal’s liver—hence the name. Liver blisters are most common in moose, but they’re also found in whitetails, mule deer, elk and other herbivores. Again, the adult tapeworms reside in the intestinal tracts of wolves, coyotes and the like, and at times wild felines.
These larvae are conspicuous on or in the host’s liver, residing in a clear or white blister—cut one open and a watery fluid emerges, along with a fleshy white mass, which is the head of the larval tapeworm. It’s not very appealing, granted, but liver blisters are not infectious and cause no real damage to the animal.

If you enjoy a meal of fresh moose liver, don’t let blisters ruin your dining plans. And if you don’t like the look of them, simply cut them out—discarding a liver because of moose blisters is a waste of a good meal.

Thought to have entered Canada from the U.S. in the 1980s via game-farmed elk, CWD has spread to wild white-tailed and mule deer in parts of Saskatchewan and Alberta. In one region of Saskatchewan, it has also been found in a few wild elk. Scientists don’t know exactly how CWD is transmitted between wild cervids, but it’s infectious and always fatal.

CWD is a progressive neurodegenerative disorder caused by abnormal proteins, known as prions, that attack the central nervous system. Affected animals eventually lose weight, waste away and die, but most infected deer taken by hunters show no outward symptoms. Although the spread of CWD is a significant wildlife management concern, neither the World Health Organization nor the U.S.-based Centers for Disease Control and Prevention (CDC) has found any evidence that it can infect humans.

Nonetheless, the CDC advises hunters and others not to eat meat from animals that appear ill or have tested positive for the disease. If the animal was harvested in a CWD-positive area, the centre suggests getting it tested before eating any of its meat. And when field dressing a cervid in such an area, hunters should wear gloves, bone out the meat and avoid handling brain and spinal cord tissue.

As the name suggests, these flatworms are large—up to 90 millimetres long and 30 millimetres wide—yet thin, as though flattened by a steamroller. Their preferred place of residence is usually in the liver of white-tailed deer, elk or moose, and occasionally in domestic livestock and bison. The fluke’s life cycle is complex, but it involves larvae that emerge from aquatic snails and attach to vegetation, which is ultimately ingested by a herbivore. The larvae then eat their way through the liver of their host.

As a rule, giant liver flukes don’t pose serious harm to deer or elk, but infections in moose can disrupt their liver function and sometimes be fatal. In some regions, the fluke has even been shown to limit the occurrence and distribution of moose.

For the hunter cleaning game, there’s no confusing these giants of the parasite world. Fortunately, they are not infectious to humans and pose no threat to those who enjoy a meal of liver. In fact, some might suggest they add a little garnish to your repast.

These generally occur following an injury that allows common, naturally occurring bacteria to enter deep into an animal’s tissue. The animal’s immune system attacks these intruders to prevent the spread of infection to other parts of the body, resulting in walled-in pus pockets. Eventually, they dry up and fill in with scar tissue.

Virtually all animals are prone to abscesses, though they appear to be particularly common in ungulates, especially males. As with my brain-damaged whitetail, abscesses often result from injuries incurred while fighting for dominance during the rut. They usually don’t do any lasting harm to the animal, and hunters encountering walled-off abscesses should simply cut them out, fully confident that the rest of the animal is safe to eat.

On rare occasions, though, the bacteria are not contained and can spread through the bloodstream to infect the entire animal. You’ll know this has happened if, within one to two days of harvesting the animal, the entire carcass turns green, slimy and soft, and smells rotten—despite being killed, cleaned and cooled quickly and properly. In such a case, contact your local wildlife agency office, and don’t eat the meat.

Resembling spaghetti, these worms are slender and white, five to 22 centimetres in length, and commonly found in the connective tissue of grizzly and black bears across Canada. They most often appear in the soft tissues of the neck, groin and kidney regions. Their life cycle is tied to blackflies, but fortunately humans can’t be infected by either blackflies carrying the larvae or by consuming the meat of infected bears.

Commonly found in the lungs of infected moose and elk, and very rarely in caribou and mule deer, the larvae of these tapeworms appear as round, white cysts. While generally less than 25 millimetres in diameter, they can reach the size of a golf ball. The larval cysts are not infectious to humans, but the eggs, which are excreted in the feces of wolves, coyotes and dogs, can be.

While hunters can safely eat the meat of infected cervids, they should never feed infected lungs to their dogs. The cysts can develop into adult tapeworms in a dog’s intestine and eventually produce eggs that can be transmitted to humans, where they’ll grow into cysts in the lungs or liver. Though human infection is rare, this is one of the few wildlife tapeworms that can be of concern to hunters.

The meningeal brainworm is a tiny roundworm commonly found in eastern populations of white-tailed deer. For the most part, whitetails show no ill effects from this parasite, but when the larvae are transmitted to moose, elk, mule deer or caribou, which are not suitable hosts, the results are often fatal for the animals. In some regions where whitetails and moose coexist, in fact, brainworm is thought to be responsible for severe declines in moose numbers. However, the worm poses no public health concern, and the meat of infected animals is safe to eat.

It’s not unusual for hunters to find wart-like growths on deer and moose during the skinning process. These are a form of skin tumour. While they may be dramatic in appearance, ranging from one to 10 centimetres in diameter, they’re not infectious to humans—there’s no risk in handling the carcass or consuming the meat of animals that have these growths.

There are roughly 50 species of ticks in Canada. These bloodsuckers feed on mammals and, depending on the species of tick, they can pass along a variety of viruses, bacteria and sporozoans to humans, leading to the likes of Lyme disease, Rocky Mountain spotted fever and tularaemia. Winter tick infestations are common on moose across Canada; symptoms include considerable hair loss, which can contribute to significant moose die-offs, particularly during harsh winters.

On the bright side, there’s no risk in eating the meat from animals that have ticks. And given the vast numbers of ticks throughout Canada, surprisingly few of them attach to people. That said, hunters and other outdoor enthusiasts should check themselves regularly after spending time in the bush.

Don’t let the name fool you—ringworm is actually a fungus, not a worm. The fungal spores can survive in soil for long periods before entering a deer through cuts or abrasions. Once established in the skin, the spores spread outward from a central core, damaging tissue and hair in their path. The effects of this rare ailment are most often seen in the deer’s face and lower legs.

Ringworm affects the skin only, and there’s no risk in eating the meat of infected animals. However, care should be taken when handling or skinning an infected animal. Deer ringworm is not the same species that typically infects humans, but it can still cause a mild rash, requiring medical treatment.

These are the roundworms that can cause trichinosis in people, a serious human infection. These parasites are common in carnivores, including bears and cougars. Though generally not harmful to their wildlife hosts, trichinella can be fatal to humans. The adult worms are tiny—two to four millimetres in length—and the larvae are microscopic, so there’s no visual way to tell if an animal is infected. That’s why it’s important to ensure all meat from bears, wild felines and wild boars is cooked properly. Fortunately, infections in people are rare.