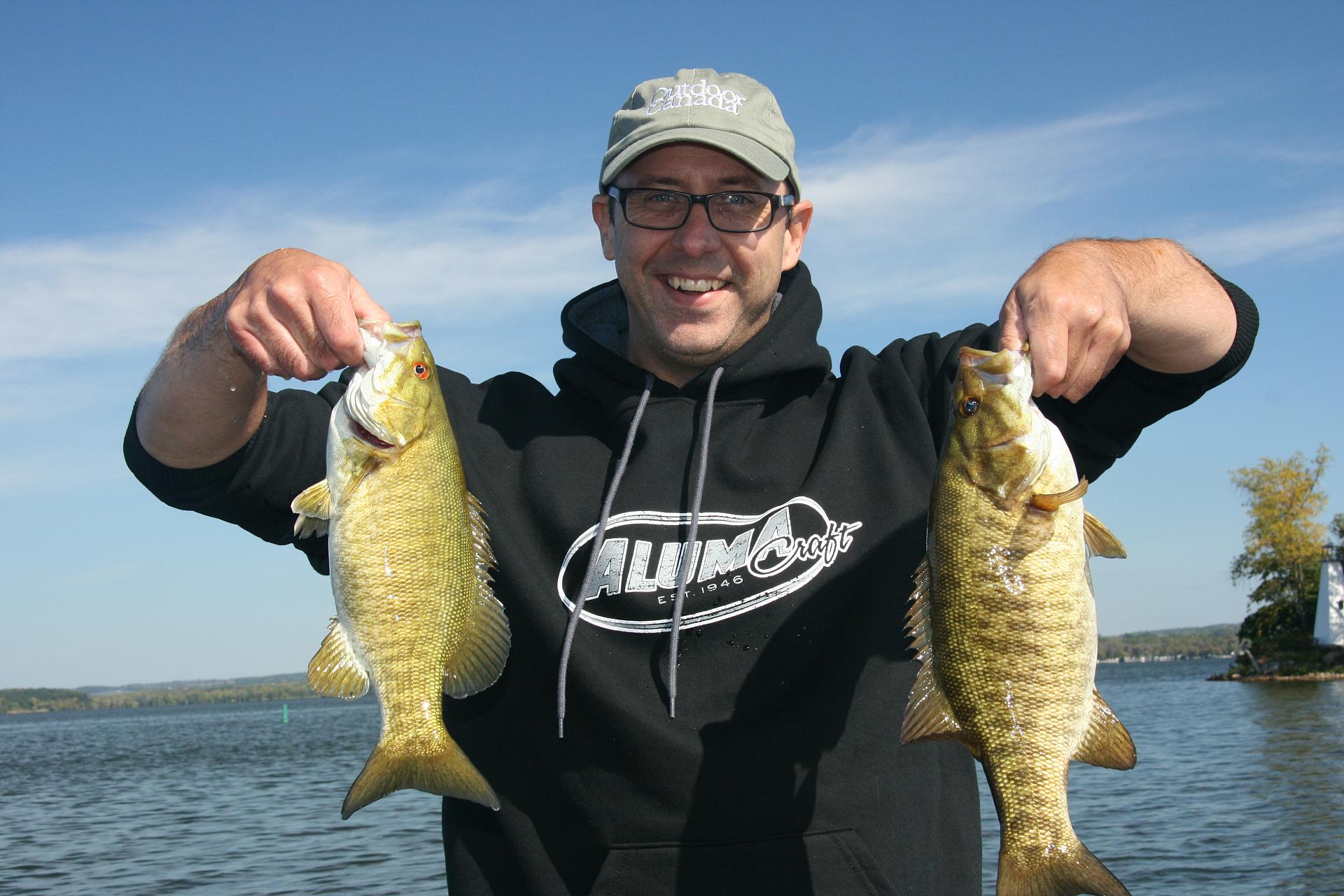 Thinking outside the box for Rice Lake smallmouth

Wind. It’s blown ships across oceans, propelled balloons around the world, lifted the kites and hearts of bored children…and made life miserable for countless anglers. That’s what I was thinking as our boat was blown off our Rice Lake hot spot for the 14th time in 30 minutes. Sure, we had our Minn Kota Terrova trolling motor, but it was no match for the unrelenting wind. Outdoor Canada’s editor, Patrick Walsh, and I had been fishing for roughly two hours without a bite. At least, we hadn’t gotten the bite we were after. Smallmouth bass were our target, but, so far, we’d felt nothing but the staccato tap, tap, tap of a goby.

We had tried drop-shotting minnows, dragging pumpkin-coloured tube jigs (a fall smallie favourite) and casting jerkbaits but we couldn’t convince a solitary bronzeback to bite. While the sky was clear, the water was completely stained, making it tougher than usual to fish this spot. Normally, you can see the rock piles that act like fish magnets. Water clarity is important, because you can better position the boat, and also see where you shouldn’t cast. This is snaggy, gear-robbing territory. We’d already lost a few drop-shot rigs to the merciless bottom.

“We usually slaughter them out here,” said one angler as we passed his boat in the wind, “but today we’ve only got two small ones.”

Okay, I thought, time to think outside the box, the tacklebox, that is. (My inner voice is quite a comedian.) I tied on a Mepps Black Fury and cast to where I figured the base of the hump would be. I let the spinner drop for a 3-second count, then started to reel slowly but steadily. The lure was about halfway back to the boat when bang! I felt a violent hit and I set the hook hard. The fish exploded from below, and tailed-danced along the surface like a miniature dolphin at Marineland, then dove straight back down. It rose again, trying to shake the lure but I was confident it was hooked. This was a relatively new spinner and I knew the hooks were razor sharp. I got the fish close to the boat when it took another dive to the bottom, putting a considerable bend in my medium-action rod. Oh no you don’t, I thought to myself, I didn’t drive two hours to lose a fish at the boat! Patrick grabbed the net and scooped up the roughly 3½-pounder then I slipped it into the livewell so we could photograph it later.

I managed to persuade another smallie to bite about an hour later, with a Freedom Tackle Hydra jig dressed with a 3½-inch Bass Magnet Shift’r Shad swimbait, but that was it for that spot. We let both fish go and tried the mouth of the Otonobee River, but there was nothing happening—it was a tough bite overall. It’s a rare day that Walsh, aka, the king of the drop-shot, goes home empty-handed. I’ll be sure not to remind him (too much) of his fish-less day the next time we’re on the boat.