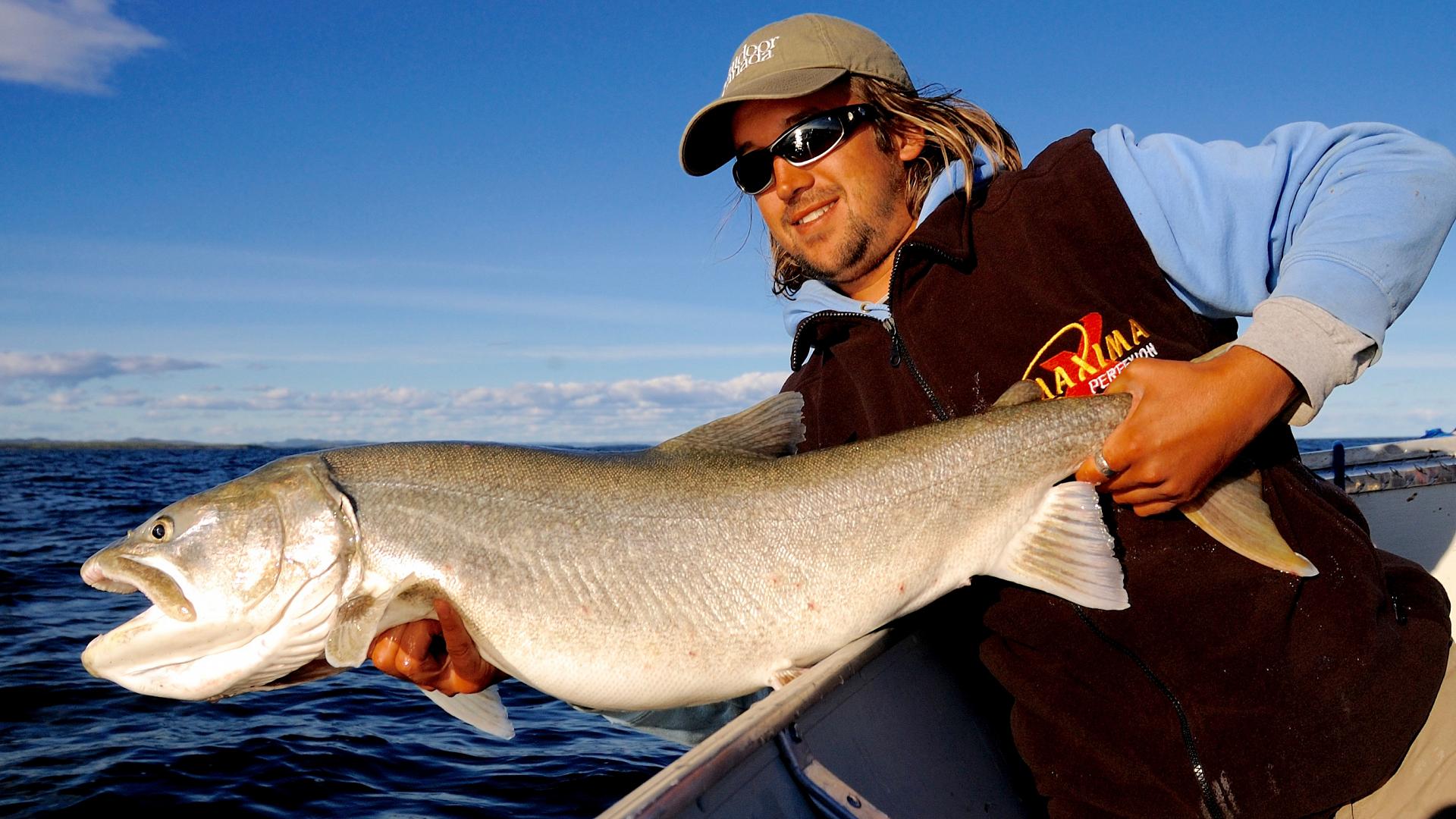 Going after summer lake trout? Put away the trolling gear!

For hottest summer lake trout bite, think like an ice angler and jig. Here’s where and how to do it

When fishing typical Canadian Shield lakes, what’s the most efficient, effective and effortless way to catch lake trout during the summer months? Believe it or not, the answer is vertical jigging, the same method you’d use through the ice, complete with the identical lines, lures and presentations.

Now, I know this is going to raise some eyebrows. And it’s not meant to diminish the advantages of controlled-depth fishing with downriggers or trolling with wire line, planer boards and segmented lead core. Those are terrific trout techniques. In fact, I used a downrigger to catch my two biggest lake trout: twin 40-pound leviathans. And I love the precision made possible with metal line.

But remember, I said “efficient, effective and effortless.” Downrigging requires a hefty upfront investment in a boat, motor, downriggers, sonar and GPS, not to mention specialized rods and reels. Ditto the paraphernalia for lead core and wire line. On the flipside, you can vertical jig for lake trout with your favourite bass and walleye tackle, and it doesn’t matter what you fish from: canoe, kayak, car topper, bass boat or family runabout.

So, do I have downriggers on my boat? You bet. And I’d never give up my line-counting wire and lead-core reels. But many—dare I say most—summer days I can catch as many or more lake trout simply jigging a four-inch white tube jig, soft-plastic swimbait or lipless crankbait on my bass and walleye rods. And you can, too.

Where to find lakers

Vertical jigging is perfectly suited to catching lake trout in the summer because the fish concentrate in and around well-defined locations that are easy to find—if you know what to look for. Start by identifying any bottom structure that’s solid, firm and different from its surroundings, such as long, protruding underwater points, boulder-strewn reefs, sunken shoals and isolated rock piles.

Next, add in a good helping of confined open space. It may sound contradictory, but “confined open space” is how I describe the main lake area immediately adjacent to the structure—its zone of influence, you might say. Essentially, the structure serves as the rendezvous point for the lake trout that cruise the area, especially the ones suspended off the edges, in the confined open water.

After finding suitable bottom structure with confined open space, most anglers stop searching and start fishing. But you can take your detective work one step further and find the sweet spots on the spot—pinch points. These are the canyons, valleys, gullies, box draws and ambush sites that lake trout use to corral, confuse and consume baitfish.

Think of the classic Hollywood western, with cowboys chasing their foes into the dead end of a high-walled canyon, where there’s no chance of escape. That’s precisely how lake trout use structure, confined open space and pinch points in Canadian Shield lakes to funnel, herd and corral schools of pelagic, open-water roaming ciscoes, smelt and shiners.

After trapping their prey, the lake trout feed on the confused baitfish, often creating feeding frenzies. And that’s one of the reasons why I call them pinch points—they’re so good, when you find them and start fishing, you have to pinch yourself to make sure it’s not a dream.

Once you know where to find open-water lake trout, catching them is a piece of cake. It’s often no more difficult than dropping a tube jig (above), swimbait, grub or lipless crankbait over the side of the boat. These are the very same lures you would use for lakers in the winter or to catch walleye, bass and northern pike in the summer. If you want to pare back your tackle selection to the absolute bare minimum, in fact, you could do worse than fishing the entire season with a four-inch white, scented Berkley Power, Mr. Twister Exude or Trigger- X tube over a ¼- to ⅜-ounce cylindrical lead head.

Complete your set-up with a walleye/bass rig: a seven to 7½-foot-long medium- to medium-heavy-action spinning or baitcasting rod, and a reel spooled with 10-pound-test monofilament or fluorocarbon, or 14-pound-test braided line (I prefer braid, tipped with two feet of flouro). Now you’re ready to cast the lure or drop it over the side of the boat and let it fall until it’s on the lake bottom or below the thermocline.

If you don’t own a sonar unit, don’t worry. As a general rule, you can assume the thermocline is approximately 30 feet down in June, and 35 to 40 feet down the rest of the summer. Use that as your guide and spend most of your time fishing the zone just below those depths. Why fish below the thermocline? Many biologists refer to the thermocline as the “ciscoe layer,” which tells you all you need to know about where the trout’s food is located—and why lakers suspend in the colder water just below it (see “Laker magnet: The thermocline” below). 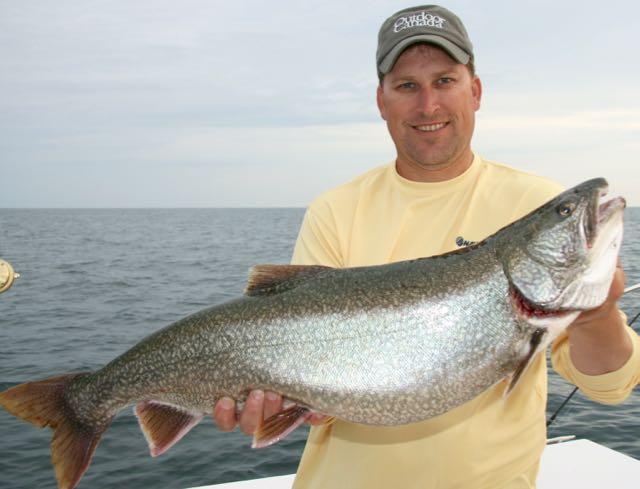 How far down should you probe? As a general rule, most lake trout anglers assume that in deep water, the fish are always on or near the bottom of the lake. But this is simply not true, especially when the baitfish are suspended much higher in the water column, relating to the bottom of the plankton-rich thermocline. By August, in fact, oxygen levels near the bottom of the lake are often depleted because of the decomposition process. This forces lake trout to suspend in the water column, and to relate even more strongly to the zone just below the thermocline.

Even if the lake trout are relating to slightly deeper water, always keep in mind that one of the primary characteristics of lake trout lakes is gin-clear water. Trust me—these sharp-eyed fish will have no difficulty seeing your lure above them. You can observe this on days when the fish are exceedingly active, and they appear on your sonar screen as those telltale arcs. The second your lure enters the water, you’ll see the trout start swimming up to pounce on the bait as it crashes through the thermocline. 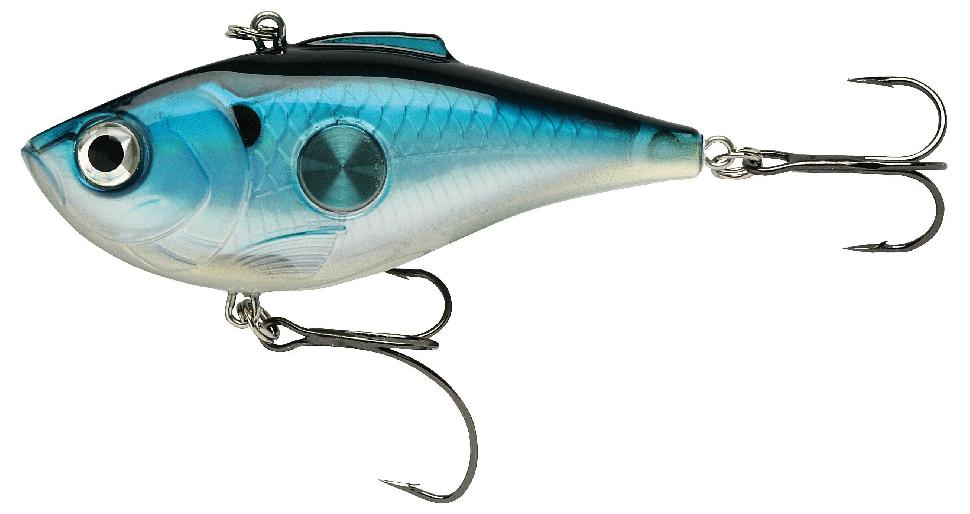 That’s the ideal scenario. Other times you’ll have to drop your lure into the zone, and begin a steady, three- to four-foot lift-pause, fall-pause, jigging motion to attract the fish. Use a tube jig, soft-plastic paddletail swimbait or lipless crankbait, such as a Live Target Shad or Rapala Clackin’ Rap (above). Eventually—and quite suddenly—you’ll see a lake trout zoom onto the screen, chasing after the lure. When that happens, if the fish doesn’t immediately devour the bait, start reeling it away as though it were a terrified ciscoe, seeing its life flash before its eyes. As far as the lake trout is concerned, your lure’s days are going to be over in a split second.

And there you have it—the most efficient, effective and effortless way to catch lake trout throughout the summer months across Canada’s vast Shield country: Fish as though it were still winter. 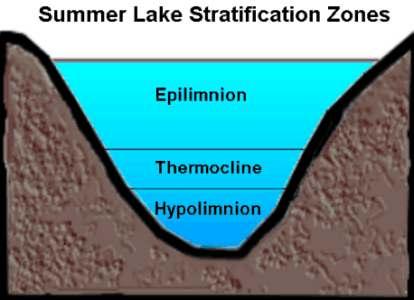 Every fish species has a trait you can exploit. With lakers, it’s their affinity for cold, well-oxygenated water in the 9°C to 11°C range, just below the thermocline. Find this thin band of water—which separates the warm upper layer of the lake from the cold bottom layer—and you’ll find every trout in the lake.

And it’s easy to locate the thermocline using a water thermometer. As you lower the probe, you’ll eventually see the temperature begin dropping almost a full degree with each descending foot. You can also see the thermocline itself on a good liquid-crystal graph—if you turn up the power, or gain, it appears as a dark, hazy band on the screen, about 10 feet thick, and usually 20 to 35 feet down. It looks like this because it hosts huge quantities of microscopic plants and animals, which are devoured by the ciscoes, smelt and shiners that lake trout eat.

Once you identify the thermocline, search out points, shoals and reefs, where the top of the structure coincides with the bottom of the thermocline or, better yet, lies another 10 to 20 feet deeper. The trout will be crammed into this narrow band of water, and you’ll be good to go.