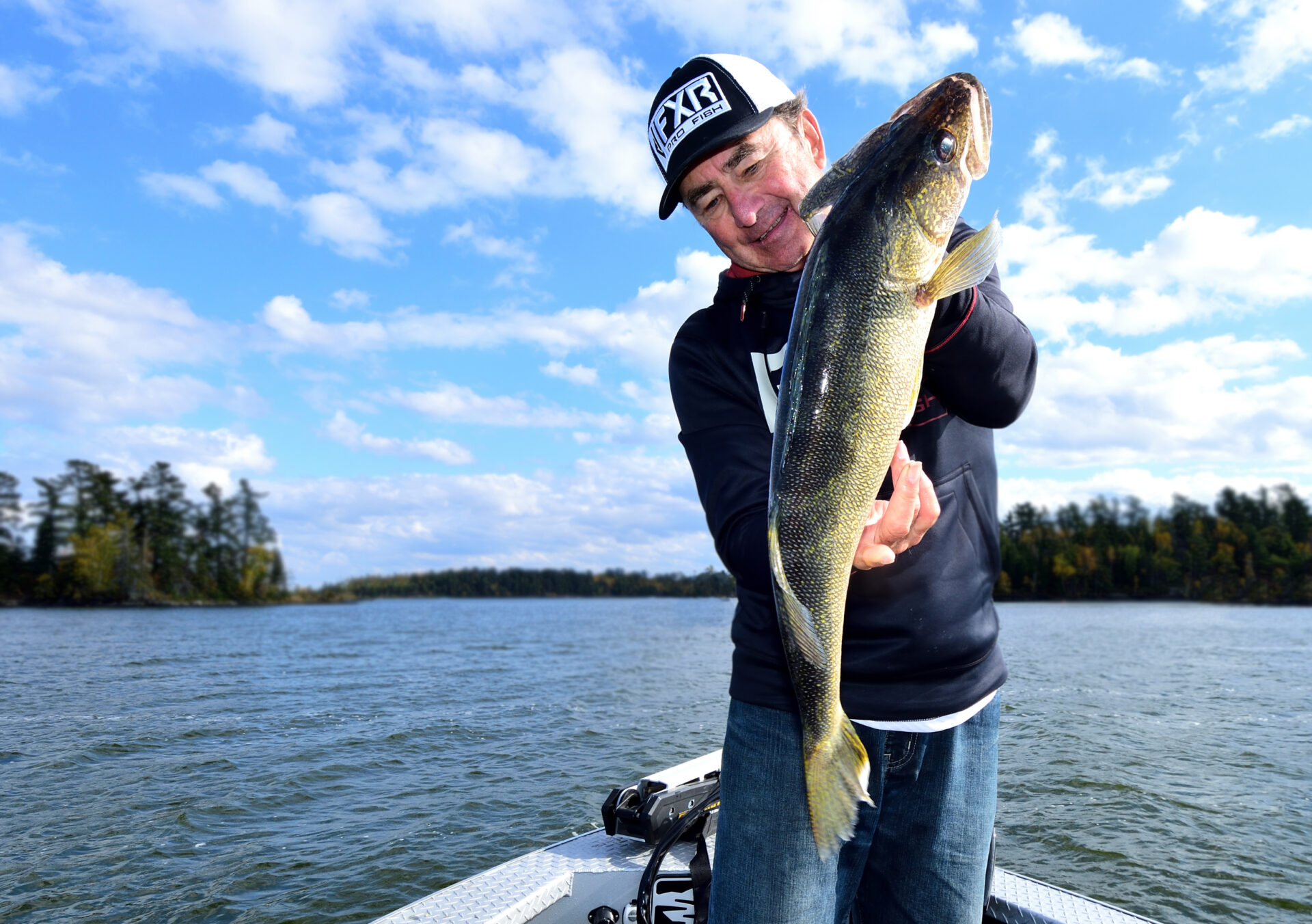 To catch big fall walleye and bass, look for these locations

The Long Drop Into Fall

Even when it feels unseasonably warm, fish still act like it’s autumn 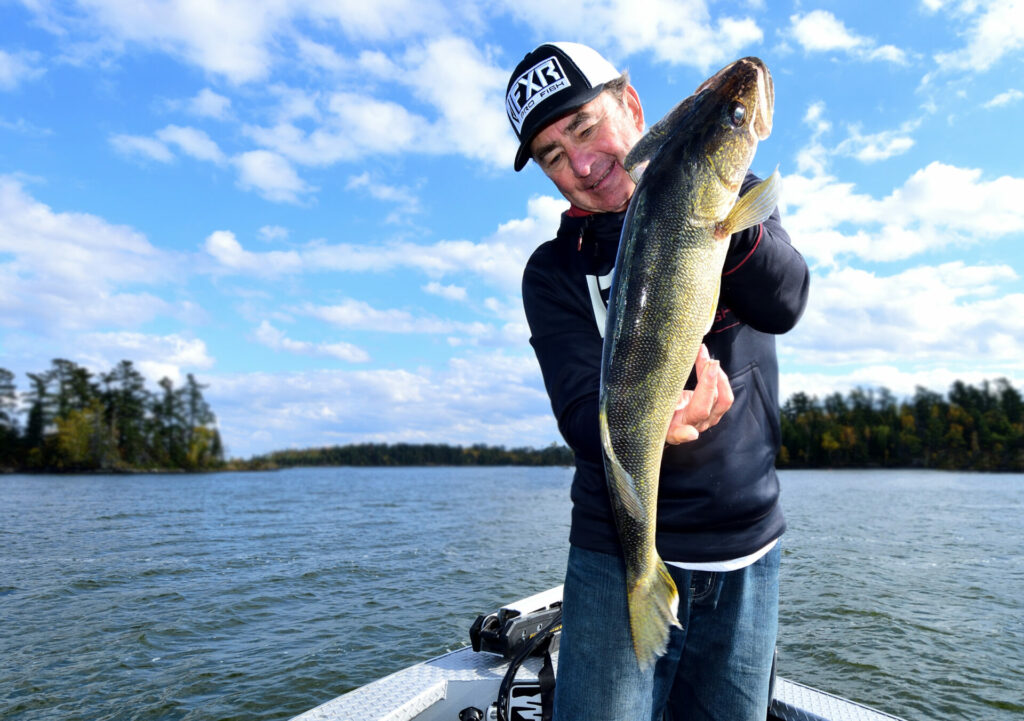 Oh, boy, has the walleye and bass fishing ever been scorching this autumn. Just like the weather, if you happen to live in the central part of the country, where up until this past weekend we’ve been enjoying summer-like temperatures in the mid- to high-20°C range. I even had two folks buzz me on Sea-doos when I was fishing last week. I can’t say that I was as thrilled with the meeting as they seemed to be, but that is a story for another day.

Normally by now, the shallows are cooling rapidly and the thermocline is getting thin. But I lowered down the Fish Hawk TD  and was shocked to see that the surface temperature on Lake of the Woods was still 64.4°F/18°C and down at the 30-foot level, it was still 62.7°F/16°C. Normally, by now, we’d have broken well below the 15°C/60°F fall threshold. 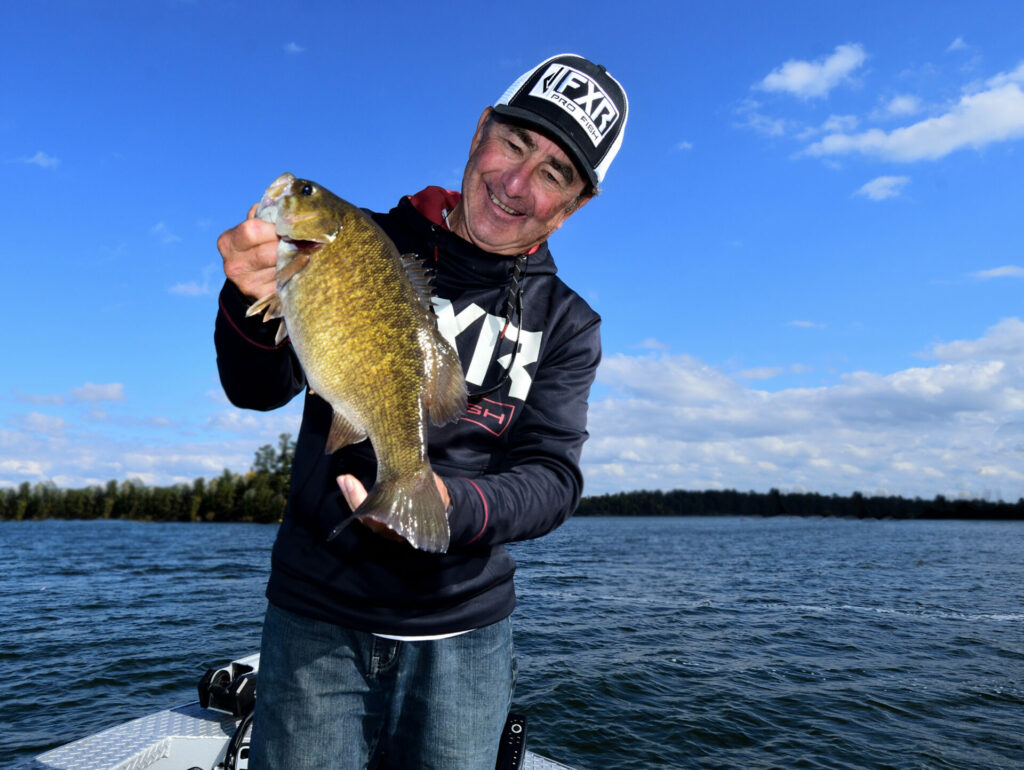 What surprised me even more about the strange weather goings-on, however, is that the fish appeared not to have received the message that it was still summer. Oh, for sure, they were a little more spread out than usual, occupying a slightly greater variety of depths, but for the most part they were acting the way they should for this time of year. This is an important message, I think, because it shows the significance of photoperiodism that fish and wildlife respond to so demonstrably. The moose and deer rut, for example, occurs at the same time every year, and crayfish typically moult within a day or two of the fall equinox, regardless of local or regional weather conditions.

But, the most prominent example I saw when I was fishing the other day, was the way the bass and walleye had positioned themselves on the dozen or so different locations that I fished. Figure 1 (below), for example, is a screenshot from my Humminbird Helix 12 where I had the best results, catching a nice mix of smallmouth bass and walleye. As a matter of fact, I wanted to keep a couple of 16- to 17-inch walleye for dinner and struggled to hook two that small. It was a nice nice problem to have.

Anyway, as you can see from the screenshot, it’s an underwater point that offers fish the essential fall ingredient they seem always to be looking for: sharp breaks into deep water.

In the summer, for example, when you fish this underwater point, you’ll typically find the bass up shallow on the 6- to 8-foot reef on the far left, just under where it says “50 ft” and especially, on the 12-foot hump in the middle.  The summer walleye, on the other hand, like to cruise up and down the gradual slope that I’ve outlined in blue.  Early in the morning, late in the afternoon and evening and when it’s overcast you’ll catch them in the 18- to 22-foot range of the blue zone.  They’ll typically drop down to the 22- to 26-foot zone at the tip, on the other hand, during midday.

If you go to this piece of structure today, however, and sleuth out the area highlighted in blue, where you caught the fish in the summer you’ll catch nada. That’s because, despite the temperature, it’s not summer. It’s fall, and the vast majority of walleye and bass have relocated to the area highlighted in red.  Notice, in particular, how tight the contours are here, indicating the fast-break or drop down into deeper water. Ditto, with the small, overlooked, much more subtle point I’ve circled in pink. If you’re a walleye or bass now, you only need to flap your tail a couple of times and you can drop from 17 or 18 feet all the way to 30 or 35 feet. Same fish, same structure, but a completely different season.