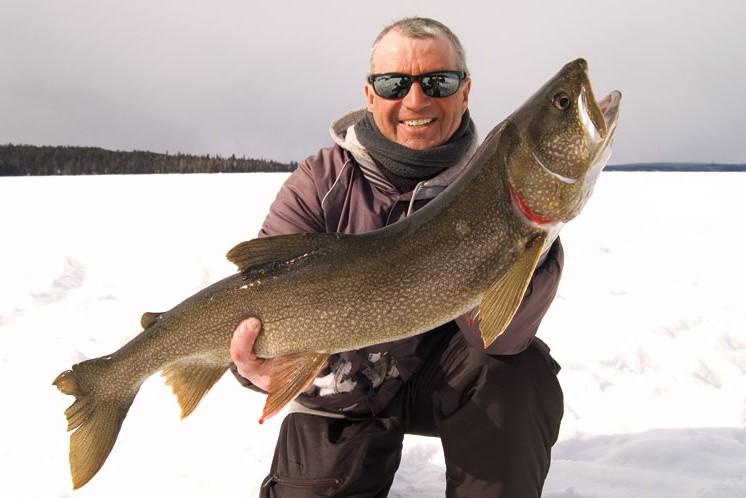 How to have non-stop angling action

1. Start on the slope

The first question on the minds of most eager ice anglers is where to start fishing when the ice fishing season begins. The answer’s the same whether you’re targeting panfish, pike, sauger, trout, walleye or whitefish: start where you left the fish in the fall. Since I normally don’t put my boat to bed until the snow and ice drive me off the water, I’ve learned that the best late-fall, open-water locations are also typically my best first-ice spots. If you didn’t fish the open water late into the season, however, start by setting up on the best-looking classic structure—underwater points, rocky shoals and sunken reefs. Once you find these high-potential areas, you need to zero in on the portion of structure closest to, and with the fastest drop into, the deepest water in the area. Remember, too, that the fish may not be on the actual slope itself-they may be on the structure—but they’ll never be far from the edge. Fish relate to these breaks because they offer quick access to a variety of depths and food sources. Essentially, the fish can simply slide up or down the break to access their preferred conditions.

I honestly don’t know why, but one thing I’ve learned from drilling holes in the ice for 50 years is that long, tapering underwater points are often the very best features to fish in the winter. This holds true for crappie, perch, pike, sauger, trout, walleye and whitefish. Reefs, humps, shoals and other structures can also be good, but give me a series of underwater points that lead to deep water and I’m a happy ice angler. And it doesn’t matter if the points are attached to the mainland or offshore islands—they all generally reign supreme under a blanket of ice and snow.

3. Head for the hole

From a structure perspective, the easiest lakes to ice fish are shallow and flat-bottomed with little structure. These are my favourite lakes for catching crappie, perch, pike, sauger and walleye because the fish concentrate in just a few isolated deep holes. Deep, of course, is relative—if most of the lake is less than 12 feet deep, a cavernous, fish-filled winter pocket may be only 17 or 20 feet beneath your boots. Note that the fish in such featureless bodies of water tend to stick close to bottom, so you often won’t spot them on your sonar screen. But just drop a tiny jig tipped with a minnow, wax worm or maggot into a barren-looking hole and you’ll see the panfish rise up from the bottom to intercept it. The same goes for the bigger predators, using a larger spoon or jigging lure. In late March and April, on the other hand, these shallow lakes are prone to oxygen depletion, so your sonar will often show the fish hovering in the water column. When this happens, forget about using live bait and adopt a much more aggressive jigging approach.

4. Serve up the option

Most provinces permit ice fishing with two lines, so why not maximize your chances by offering something different on each line? When chasing crappie and perch, rig one line with a tiny, 1/32-ounce jig tipped with a maggot or wax worm, and the other with a bigger, more colourful, 1/16- or 1/8-ounce jig tipped with a lively emerald shiner hooked lightly through the lips. For walleye and sauger, drop a lively minnow tethered to a jig down one hole (use a tip-sensitive deadstick rod hanging over a pail) and aggressively jig a spoon or swimming jig in another. With pike, set out a foot-long, freshly killed ciscoe or sucker on a quick-strike rig in one hole, then jig a spoon in a second hole. Finally, for lake trout, jig with a rod in each hand—one baited with a white, scented Exude or Berkley Power tube on a 1/8- to 3/8-ounce jig (the best winter lake trout combination) and the other rigged with a Williams spoon or airplane lure. When you jig with two rods like this, you can increase your odds of success even more by working different depths.

5. Drop into the zone

Pike epitomize how most fish feed in the winter-by looking for the silhouette of their prey against a light background. This makes the underside of the ice a magnificent backdrop. Indeed, pike are at their feeding finest when they can capture soft-rayed forage swimming above them in the water column. Black crappie, lake trout, perch and walleye behave similarly, so it’s always important to present your bait or lure at the fish’s eye level or above—never below. During mid-winter, it’s equally important to monitor your sonar for crappie, perch, pike, trout and walleye streaking upward, particularly in lakes with free-roaming forage such as alewives, ciscoes, shad, shiners and smelts. These baitfish graze on plankton-microscopic plants and animals—that move closer to the surface in the winter when thick ice and deep snow reduce the amount of light that penetrates the water.

6. Stay in the light

If you only have a few hours to hit the ice, maximize your time by heading out when the fish are feeding most actively. Key here is the amount of daylight reaching the water column—and the type of fish you’re targeting. Species such as walleye and sauger feed most intensely at dawn and dusk, for example, while crappie, perch, pike and whitefish are most active in the middle of the day. During winter, in fact, the light conditions beneath the ice and snow are similar to the ideal conditions during the open-water season—namely, overcast days, when most fish species feed more actively. That’s why winter crappie, perch, pike and whitefish anglers often enjoy superb success on sunny winter days when the same conditions during the open-water season would shut down the fish. Indeed, the optimal amount of light that causes pike to be most active is closer to the illumination under the ice at midday in January than it is at noon in the summer.

7. Wait for the walleye

While dusk and dawn are the prime feeding periods for walleye, dusk is the more active of the two. But this daily feeding frenzy develops much earlier—usually 30 to 45 minutes before sunset—than most anglers realize. That’s because walleye are triggered to feed when the light fades fastest, which in early and mid-winter is when the sun is sitting on or just above the horizon. So make sure you’re out on the ice at least an hour before that, waiting. That way, you’ll often be catching the fish when other anglers are only just walking onto the ice. Also be sure to pre-drill plenty of holes—covering a variety of depths—in advance of this half-hour whirlwind of activity so you can follow the wave of walleye.

8. Look for the lunkers

Winter is unquestionably the best time of the year to catch lake trout because the fish are generally easy to get to, they never stop feeding and you don’t need any special equipment. Winter’s also the best time to catch a trophy laker of eye-popping proportions if you concentrate on big lakes with a history of producing big fish. You usually catch the largest trout from the biggest lakes because the fish can find places to hide from anglers for the number of years it takes them to grow to trophy proportions. Bigger waters also offer a smorgasbord of high-quality forage such as ciscoes, shad, smelt, suckers and whitefish. Finally, big trout lakes typically have plenty of bait-filled shallow areas the fish don’t inhabit in the summer because the water is too warm. But that isn’t a problem in the wintertime, and the plentiful food supply becomes available to them.

Catching lake trout during the winter is easy. The hard part is finding them. Many hardwater anglers spend far too much time fishing over deep structure-underwater points and reefs in the middle of the lake in 80 to 100 feet of water. Instead, it’s much wiser to drill holes over and around structure in moderately deep water of 20 to 40 feet. And since lake trout—particularly the giant—-are meat eaters, serve them a hearty, four-inch tube jig, Williams Ice Jig or airplane jig in gold, silver or white or a baitfish pattern. Finally, don’t forget that lakers are never numerous, at least not compared with walleye, pike and panfish, and they’re always on the move. So keep mobile—30 minutes at one spot with no action means it’s time to roll.

If you can only go fishing a few times this winter, make sure it’s at the end of the season. As the amount of daylight increases and the ice begins to honeycomb, most species-with the exception of lake trout and whitefish, which spawn in the fall-move toward the areas where they’ll eventually lay their eggs. As a result, you’ll find perch, sauger and walleye congregating in ever-greater numbers at the mouths of inflowing creeks, rivers and streams, as well as along windswept, rocky shorelines. Pike, on the other hand, start massing around the mouths of large, shallow, weedy bays, while black crappie flock toward small, black-bottomed coves or anywhere green pencil reeds flourish in the spring. All of this makes for the best ice fishing of the season. Just remember that the larger fish, even the plump perch and crappie, are most likely carrying eggs. So enjoy the frenzied activity—even keep a few small, immature fish for dinner—but release the larger ones. That way, we can all enjoy putting these ice-fishing tips to use for many more years to come.