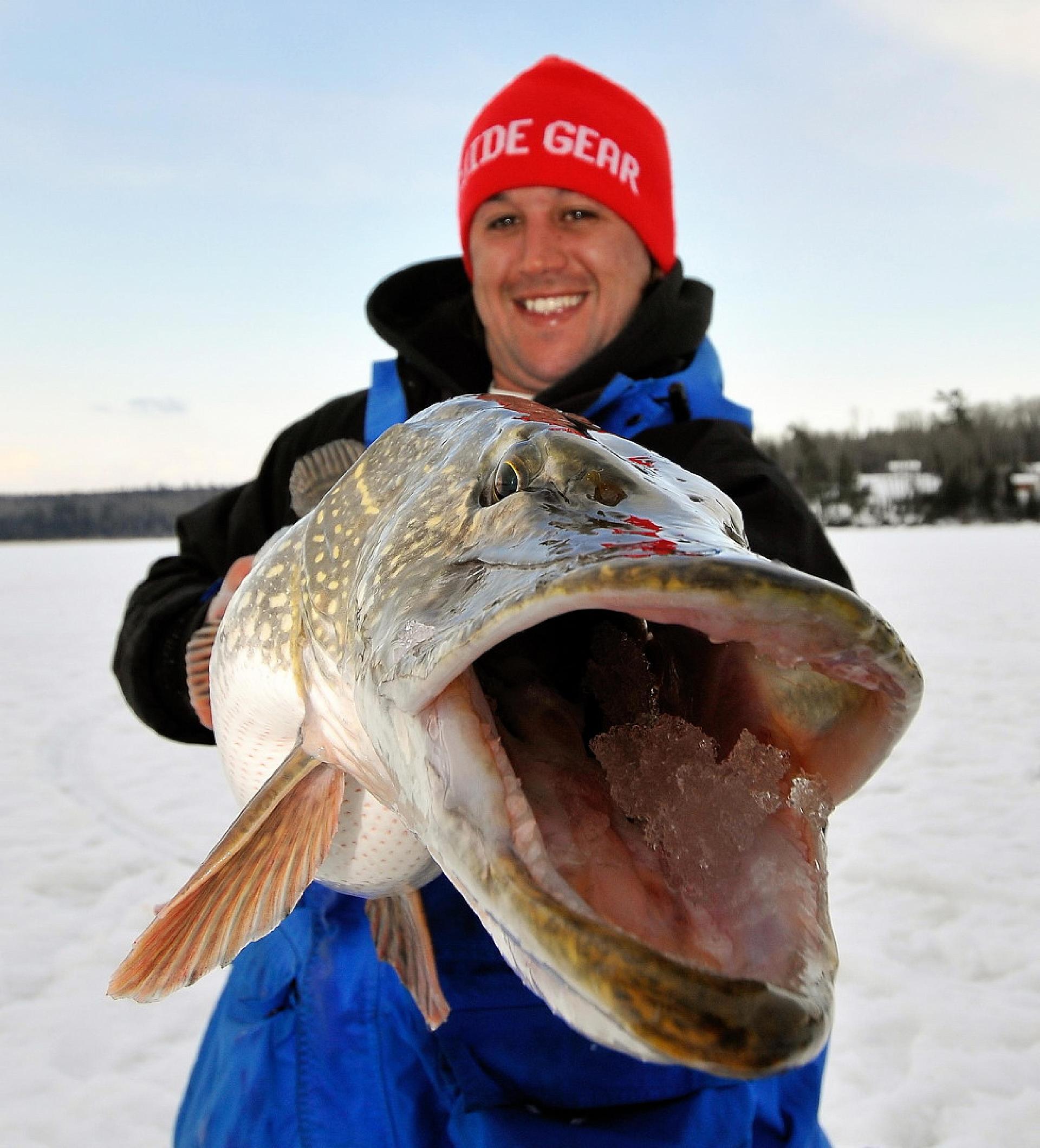 Trophy Pike, Quick Strike Rigs and So Much More!

I’ve said it many times before, but one of the main reasons I enjoy presenting fishing seminars is because I get to meet so many nice people, swap tales and keep a pulse on the fishing side of things.  The recent seminars at The Great Outdoor Show in Toronto were a perfect case in point.

What surprised me at the Show, where I presented ice fishing seminars each day, were the number of folks who were interested in catching big northern pike. 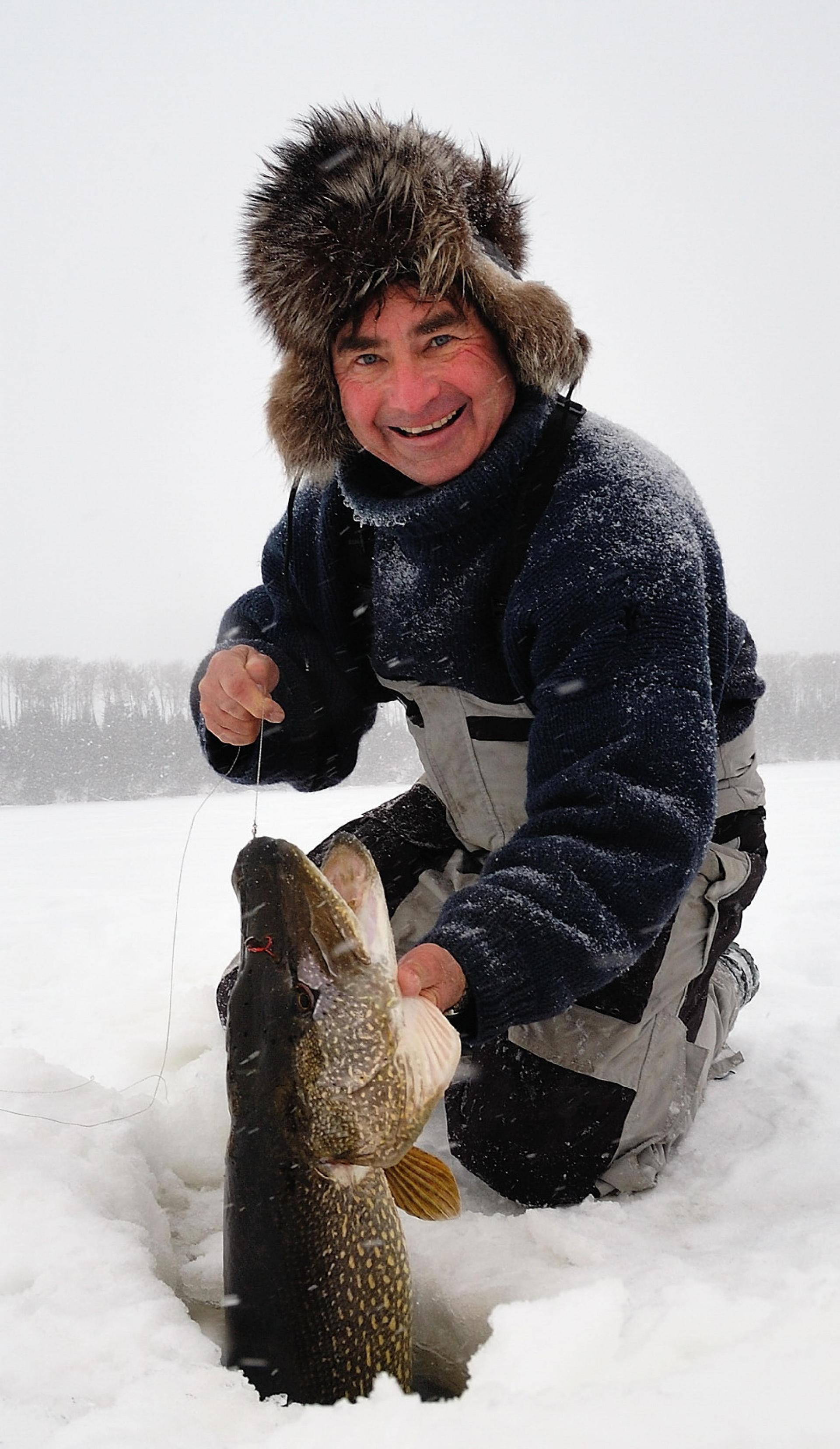 I have to be honest, I would have thought most of the ice anglers attending the event, would have been more keen to hear and talk about lake trout, walleye, yellow perch, black crappies and whitefish.  But nope, it was big toothy critters.

The fact I had brought along some great video clips we had shot over the past few years catching giant pike through the ice, in the 25- to 32-pound range fuelled the fire a bit.  I mean, when you see one of those huge crocodilian pike heads popping up out of a hole in the ice, you think, “man, that looks like fun”.

Well, trust me, it is.  And the best way to get in on the action is by using a quick strike rig.

I demonstrated quick strike rigging at the Show and it generated a lot of questions.  Especially from anglers who wanted to know how to fashion their own rigs.

So, let’s address this question first.

The easiest way to make a quick strike rig is to get some Surflon Micro Supreme leader material made by the folks at American Fishing Wire http://www.americanfishingwire.com/smsupreme.asp

The reason I favour Surflon Micro Supreme is because even though it is stainless steel wire, it is so thin and flexible you can use your favourite fishing knots to tie on the hooks.  So, you don’t need crimps or crimping tools.

Simply cut off a 12- to 15-inch long piece of leader material – I favour the 26, 40 and 65 pound tests for my quick strike rigs – and tie on a number 4 Gamakatsu round bend treble hook using your favourite improved clinch, Palomar, snell or similar knot.  Now, about 3 inches up the leader, tie in a second number 4 Gamakatsu round bend treble hook, so you have the two hooks tied in tandem and spaced about 2 inches apart.

By the way, the big mistake most anglers make is spacing their hooks too far apart.  Resist the temptation and keep the distance no more than about 2 inches.

Of course, you can also use similar strength Seven Strand Wire and Nickle titanium wire to fashion your quick strike rigs, but if you do you will have to crimp on the hooks and swivel.  That is no big deal provided you have the appropriate size crimps and crimping tool – just remember, keep the distance between the hooks to only a couple of inches.

Now, the other critical step. 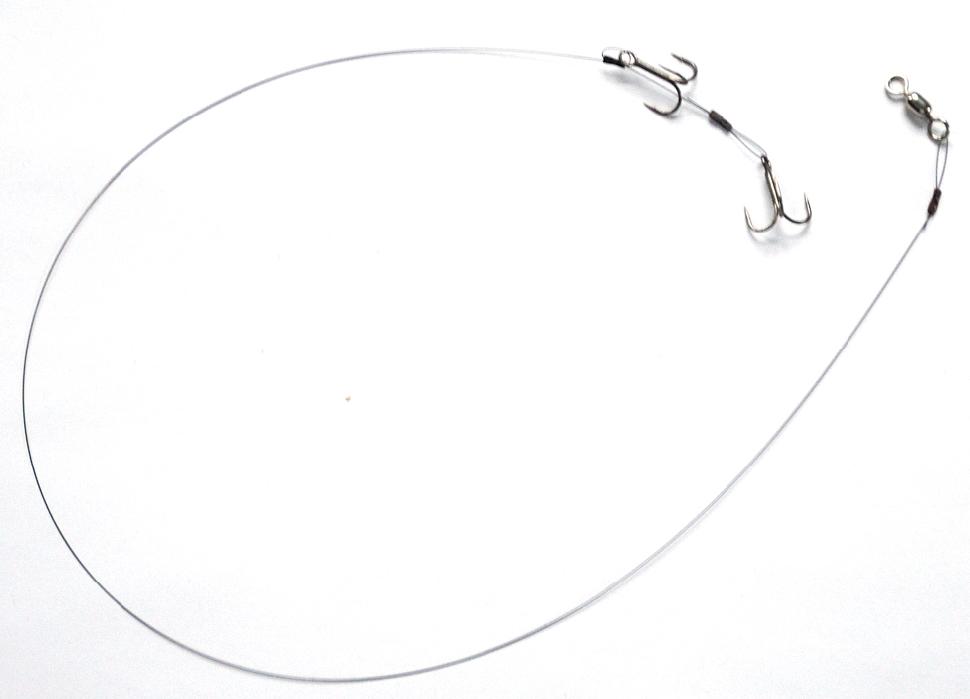 When you do it right, your two hooks will be positioned in the tail half of the deadbait, while the head half will be free of hooks.  When you lower down your bait and set the flag on your tip up, your deadbait will be hanging straight down.  Now, when a giant pike approaches your bait, it will flare its gills, create a vacuum and your deadbait will zoom into its mouth, head first so that your two hooks are positioned to catch flesh around the pike’s lips and mouth and not, down its throat.  This makes releasing the fish a breeze.

Oh, yes, you’re going to think those two #4 treble hooks are far too small.  They are not.

Trust me on this – we’ve caught so many pike in the 25- to 32-pound range over the past many years, that this is the ultimate presentation.  You do not need to hang the deadbait horizontally in the water and you do not have to spread your hooks so far apart that one is around the head and the other is anchored near the tail.

Set properly, when you see a flag fly, you can run over to your tip up and start pulling back on the line immediately.  That is why it is call a “quick strike” rig.  You do NOT wait for the fish to swallow the bait.   You also do NOT jerk hard on the line to set the hooks.  Those Gammie trebles are so super sticky sharp that all you need to do is start pulling in the line – and bringing in the fish. 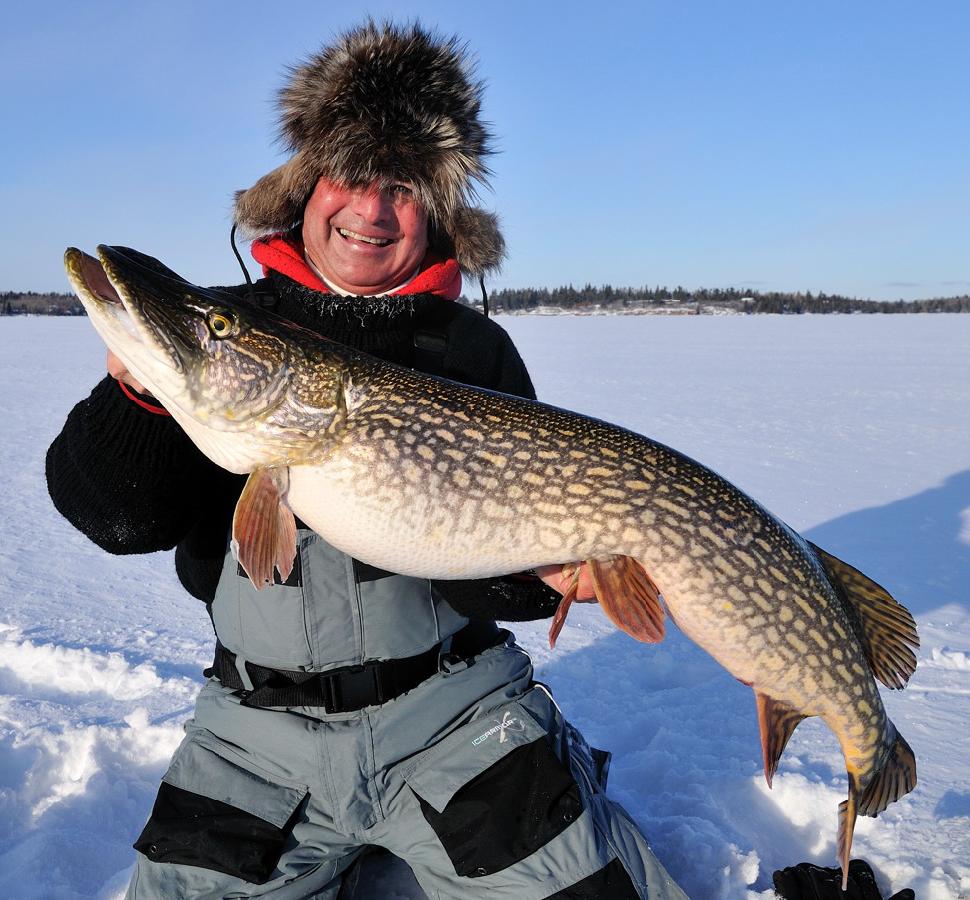 Then, take a quick photo and release it unharmed.  You’re holding a precious gift in your hands.

Lee writes …. “Hi Gord, I’m an avid ice fisher. My crew and I have been searching for a TROPHY Northern Pike lake for a few years now and we keep coming up a little short.  The fishing has been good, but nothing in the 20 pound plus range.  We have all our own gear—we just need a lodge that has good deals on cabins, and a lake filled with monsters.  We are from Winnipeg and St. Rose and usually can only get away for three days so travel time is an issue. Any thoughts or recommendations?”

The reason Lee’s question is so cool, is because unless I am fishing extremely remote pike waters one of my little secrets to sleuthing out huge trophy northerns is ice fishing in lakes that most folks avoid because they think they’re fished out, or they fly under the radar screens of most anglers because they lack walleye, bass, perch and a lot of the other more popular species.

The other criteria I look for is lots of deep water.  Water in the 40, 50 and 60 foot plus range.  That is where the giant pike live in the summer – when they are almost totally out of reach of most anglers – eating ciscoes, herring and tulibee (all the same specie by the way), suckers and whitefish.  Come winter, however, those same humongous pike are cruising the shallow shoreline structures and back bay cover in 25-feet or less of water.

It is why winter time is the prime time to catch the trophy pike of a lifetime.

And Lee, let me suggest this: Check out the Whiteshell Provincial Park in eastern Manitoba along the Ontario/Manitoba border.  Especially lakes like Falcon Lake where there are some monstrously huge northern pike!

Good fishing to all! 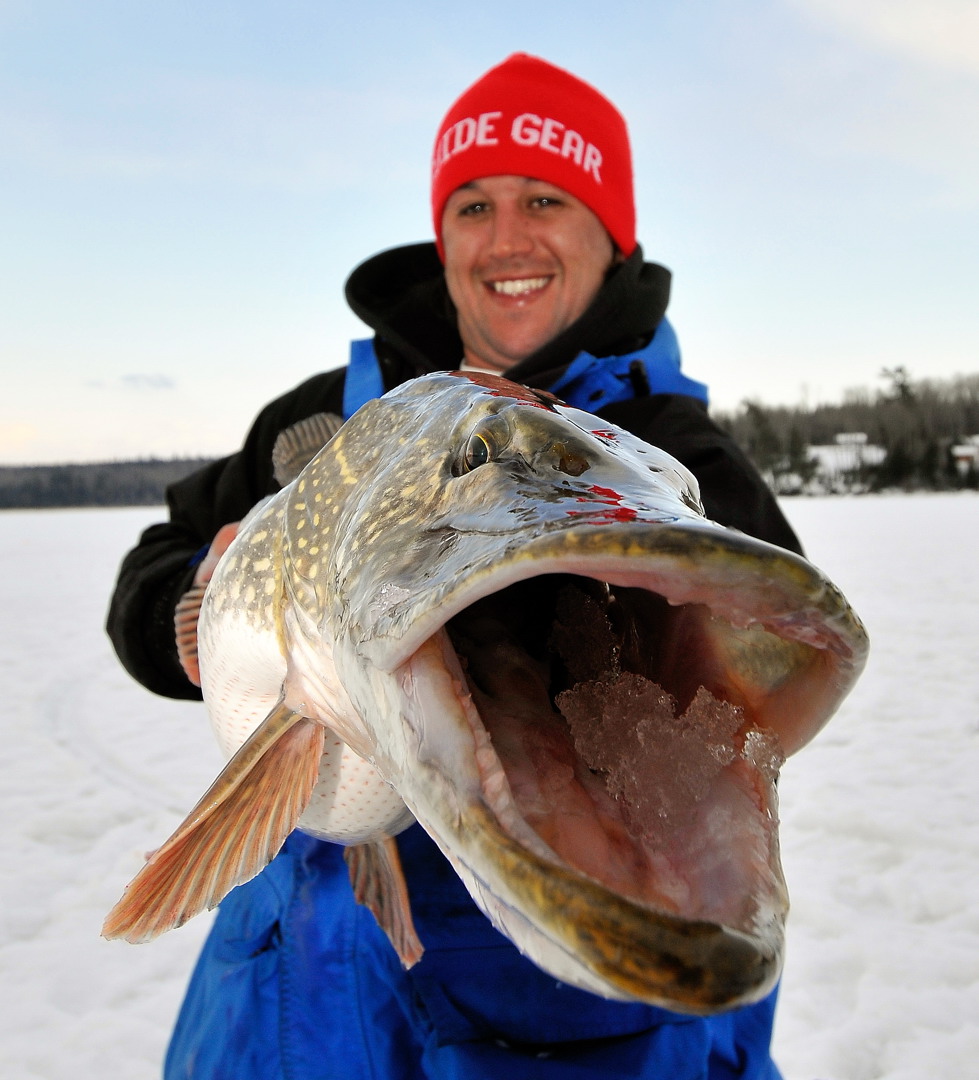