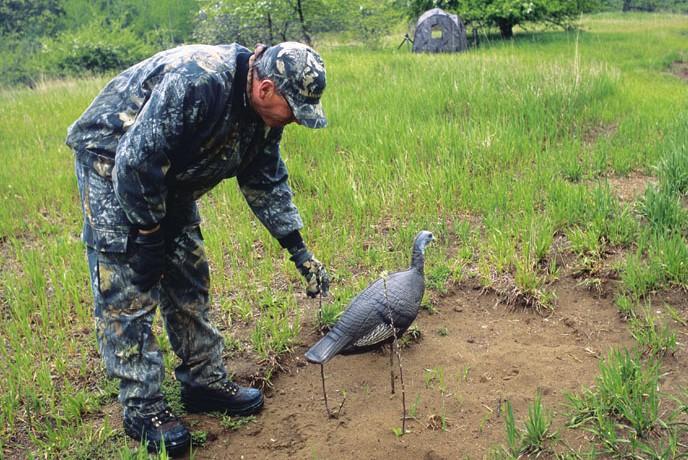 If you hope to lock wattles with a long beard in an area where there are other hunters this spring, expect to be hunting pressured turkeys. The same goes if you hunt a small, private woodlot and you accidentally bump some gobblers—thereafter you’ll be hunting pressured toms. With record numbers of hunters in the woods each spring—particularly in southern Ontario—these hyper-wary birds won’t fall for the same tricks twice. And sometimes that means standard set-ups and calling just won’t work. When that happens, here’s what you need to do.

Over-calling is counterproductive with pressured birds, especially if they’ve made the connection between calls and hunters. For example, they may have already trotted into trouble after succumbing to bogus hen calls. Avoid raising suspicion with loud yelps and cutts, and instead use soft clucks and purrs—the small talk of feeding hens. I prefer friction calls, as they carry farther into the woods than diaphragm calls, even when both are used quietly. It’s a good idea to also have a mouth call in place, though, for a hands-free cluck or purr to stop a tom in your shooting lane. Realistic calling is essential with pressured toms, so to make your set-up even more convincing, rake the leaves with your fingers to mimic a turkey scratching for food (turkeys often scratch once with one foot, then twice with the other, creating a scratch-pause-scratch-scratch rhythm). Pre-season scouting with calls can also create call-shy, spooked toms. By the time opening day rolls around, these masters of survival will have the hunters patterned instead. They’ll just lock their beaks, ignore the calls and vanish for the season.

When hunters first arrive in the woods, they often fire up crow calls and owl hooters hoping to get a reflex gobble. But heavily hunted toms are so in tune with their environment, it doesn’t take them long to associate all that noise with a threat. Basically, the locator call tells them there are hunters in the woods. And even if they do respond with a reflex gobble, these spooked toms are highly unlikely to approach any calls. That means you have to break the pattern; namely, arrive quietly from a different direction than the other hunters and don’t use a locator.

Hunt for pressured toms by looking for the sign they leave-tracks, droppings, scratched-up ground, dust baths-not by listening for their gobbles. That’s because pressured toms are often quiet. The ones that do gobble a lot attract more hunters and either get shot or learn to shut up. In my experience, two toms come in quietly for every one tom that comes in gobbling. And the two that arrive quietly are usually painfully slow about it.

If staying put is difficult because you can’t stay motionless for a long period of time, use a pop-up blind that allows you to sit comfortably and change positions. Pop-ups shine in small woodlots and heavily hunted areas because they’re safer, less intrusive and more considerate of other hunters than run-and-gun tactics. And while turkeys are able to pick out many strange objects on their home turf, they don’t seem to be alarmed by blinds as long as they don’t detect any sound or movement.

If not disturbed, gobblers will follow the same routes every day from their roosting sites to feeding areas and strut zones. Rather than trying to call toms away from their routine, it’s better to learn their patterns and quietly set up along one of their routes or near their destination before they arrive. Again, call sparingly. If you’ve patterned the birds correctly, they’ll show up. Turkeys feed most heavily after flying down in the morning, and again just before roosting at night, often in the same feeding area. That’s the spot to hunker down, in either the early morning or late afternoon. In the middle of the day, meanwhile, turkeys commonly cruise by their roosting sites, making that a good location for a midday set-up. Remember, turkeys have good short-term memories and can show up at your set-up hours after you first called. Patience kills paranoid long beards.

A pressured gobbler will often come to within 70 yards of your set-up if he can see the decoy. Then he’ll put on the brakes and go into strut, expecting the hen to cover the rest of the distance to him. If she won’t budge, he’ll walk off. Or, if he doesn’t see any hens at your calling location, his paranoia gene will fire up and he’ll scram. Avoid this by setting up where your calling location and your decoys, if you use them, can’t be seen from a distance. Saddles between hilltops, saucer-like depressions, benches on hillsides and areas below ridge crests are good places to call from. Such differences in elevation help keep you and your decoys out of sight while putting the turkey in shotgun range the moment he first appears. If the terrain doesn’t allow for such a set-up, position yourself instead in a patch of thick brush.

Turkeys prefer open hardwoods, but if hunters continually disrupt them, they may move their whole operation into the sanctuary of thick cover. I once flushed some turkeys, for example, as I hiked through some nasty cover to get to another location in supposed prime hardwoods. So, if the hardwoods in your hunting area aren’t holding birds as the season progresses, find the thick stuff nearby. Slip into it slowly and quietly, rustling the leaves occasionally to imitate feeding turkeys. Set up quietly and call sparingly with soft clucks and purrs. Since visibility is restricted to a few yards in heavy cover, you’ll hear the birds approaching long before you see them. This may allow you to turn to face them without being seen. Aim carefully—your shots will be at close range, so your pattern will be small.

Knowing where gobblers roost is always good, but don’t call near the roosting tree of a pressured tom at first light. This will only chase him straight away from you. If you only have a few hours to hunt in the morning, it would be better to first pattern the gobbler for a few mornings—without calling—to find out where he goes when he hits the ground. That way, you can meet him there one morning. Or, if a roosted gobbler continually flies down in the opposite direction of your calling, team up with a buddy. Have him set up so that your calling pushes the tom toward him instead.

When time is running out on your hunt, it may be worth staging a title bout between two heavyweight gobblers. Use the guttural fighting purrs of toms, together with wing-flapping sounds and a ruckus in the leaves, to simulate a battle for dominance. Call-shy boss toms may drop their guards to investigate because they’ll want to know if other toms are in their area. Fights also attract subordinate gobblers—if a boss tom were to be beaten, lesser toms could then improve their status in the flock’s social structure.

Staying on the move and calling loudly until a hot gobbler answers can produce birds in the big woods where there’s room to roam. In small woodlots and heavily hunted public areas, though, taking it to the tom can quickly burn out the area. An aggressive approach results in more bumping of birds, causing them to avoid calls. Turkey hunting is as much about the gobble as the gobbler, but a lack of gobbling doesn’t put you out of the hunt. Turkeys shut up for various reasons, whether it’s hunting pressure, an abundance of readily available hens or fear of the boss tom-it’s not necessarily because they aren’t in the area. If you need to hear gobbling to keep up your confidence, set up in the morning within hearing distance of the roost, but not so close as to risk being detected. If that set-up doesn’t produce, allow yourself one move to set up on a travel route or near a feeding area; then plan to stay put until quitting time. At the very least, this passive approach will preserve your hunting spot for another day in the woods.