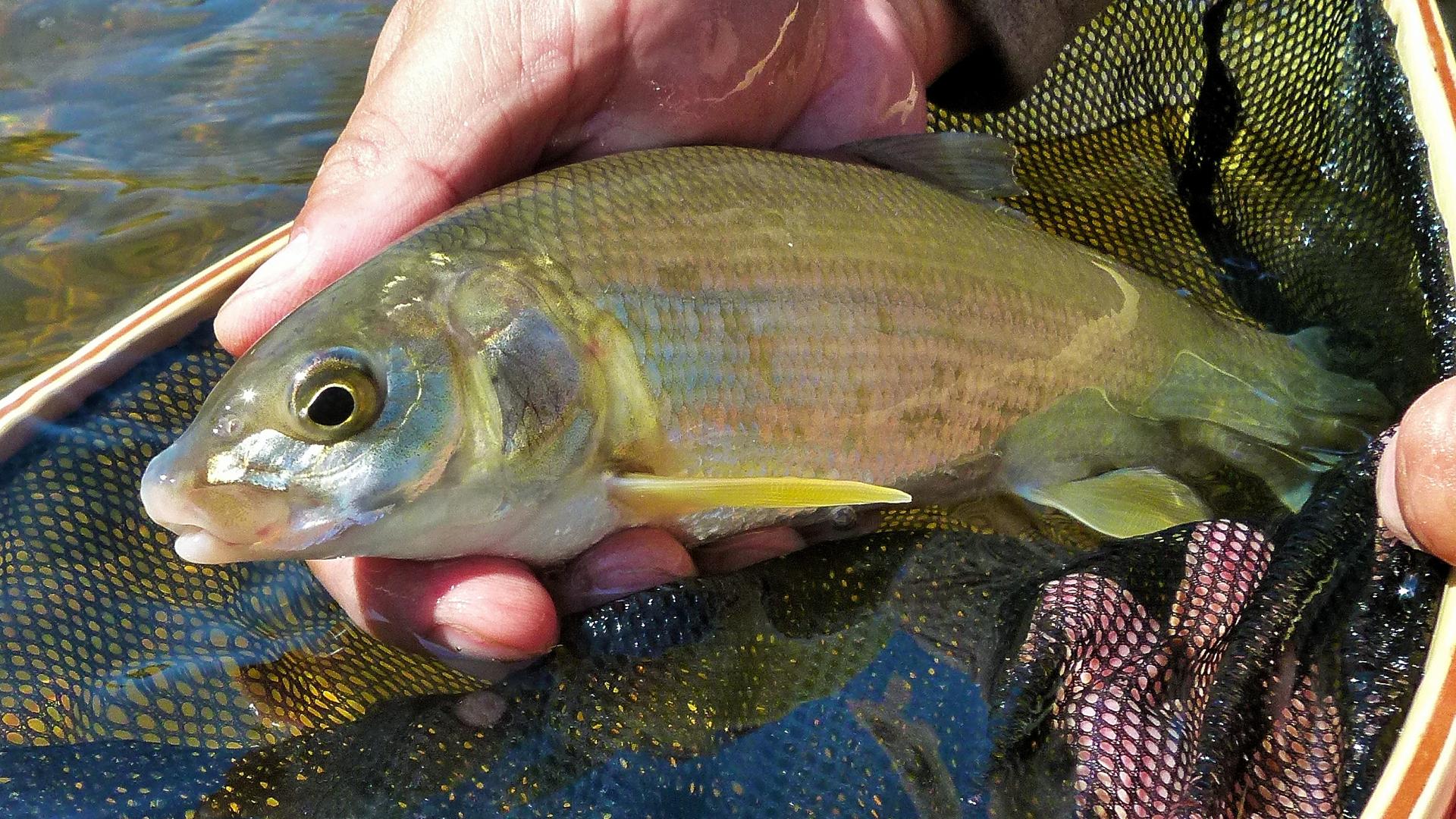 Why you’ve got to try fishing for mountain whitefish

Why you’ve got to try fishing for “rockies”

For summer fishing fun, the abundant mountain whitefish of Alberta and B.C. promise not to disappoint

A flash in the water caught my eye, so I climbed a nearby hill for a better look. Through my polarized glasses, the pool below came into sharp focus. Surrounding some large submerged boulders were dozens of mountain whitefish—exactly what I was hoping for. After watching intently for a few minutes, I could tell they were feeding, as every now and then I’d see a fish flash side to side as it picked off invertebrates drifting in the current.

With my spinning rod, I cast a size 10 Beadhead Prince Nymph about 20 feet upstream from the boulders. Suspended beneath a dime-sized bobber, the fly ticked and bounced along the bottom, exactly where a whitefish expects its food to be. At the moment the rig got close to the submerged rocks, the bobber hesitated, then stopped.

I lifted the rod and it arced into a deep bend. There was weight, then shaking. The hooked whitefish raced around the pool, once, twice, three times, while I grinned from ear to ear (below). In time, a mint-silver mountain whitefish came to hand. I admired it for a few seconds, then carefully removed the hook and released it. On my very next cast, I caught another one, followed by yet another. And on it went.

Fishing for—and catching—these whitefish in rivers is tons of fun, and on this afternoon, that’s what I had in mind. Here’s how you can have a mountain of fun, too.

The wonderful thing about mountain whitefish is their extraordinary abundance. Besides being cooperative biters, they swim in vast schools—sometimes numbering in the hundreds—providing great, but often overlooked, fishing opportunities.

Also known as Rocky Mountain whitefish or rockies, they’re primarily a fish of large, swift waterways with rocky bottoms, where they inhabit the pools between riffles. I’ve also found them in medium-sized freestone rivers and streams, especially in mid- to late summer.

In Canada, mountain whitefish range across the eastern slopes of the Alberta Rockies and throughout much of B.C. There are large populations in the Athabasca, Smoky, Little Smoky and Upper Bow Rivers, among many others. They’re also found in western lakes.

There are two things that sum up the knowledge required to tackle mountain whitefish in rivers: they like to school up, and they like to feed on bottom. By and large, these fish are opportunistic bug eaters, and they’ll readily consume all manner of invertebrates that drift past them close to bottom. Carry a selection of Beadhead Prince and Beadhead Pheasant Tail Nymphs, in sizes 10 down to a tiny 18, and you’ll be set for 95 per cent of all mountain whitefish situations.

For bigger rivers, I typically use a six-and-a-half- to seven-foot light to medium-light, fast-action spinning rod and a matched reel filled with six-pound mono. If I’m fishing smaller creeks and streams, I’ll drop down to four-pound mono. Whitefish have soft mouths, which is why I use mono—the stretchiness helps keep the fish hooked, rather than having the hook pull out.

Again, fishing for rockies is straightforward, given their dining preferences: get a nymph down to the bottom of a deep pool. In smaller waters, two feet is considered deep; in medium-sized rivers, you may be fishing three or four feet deep. It’s all relative.

There are several methods for presenting the nymph. One of my favourites is to attach a small bobber up the line to use as a strike indicator. If the water is two feet deep, snap the bobber three feet up the line. This extra length compensates for current and drift. Cast the rig upstream, giving the fly enough time to sink to the bottom before it drifts past the fish.

Watch the float intently. At any hesitation, bump or tug, lift the rod to set the hook. Sometimes there’s nothing on the line, but more often than you’d expect, it’ll be a whitefish. This set-up works great when fishing water a few feet deep or less.

The second technique involves fishing the same nymph on a two- to three-foot dropper, about eight inches above the end of your line. Depending on the size of the stream and the strength of the current, use either a splitshot or an ordinary three- or four-inch hardware nail for a weight. Nails are cheap, non-toxic and ride smoothly over the rocks without snagging. At the end of your main line, simply crimp on the splitshot or use a granny knot to tie on the nail.

Mountain whitefish take the bait with several quick, sharp, but light bites. To detect a bite, keep your finger on the line, and stay alert for the distinctive tap, tap, tap. When you feel it, set the hook. Nymph fishing the bottom is probably the most effective way to catch rockies and, where allowed, tipping your fly with a maggot or two will double the catch rate. And, of course, double the fun.

Edmonton’s Fred Noddin is a graduate student and fisheries researcher at the University of Alberta.

If I’m keen on trying to catch the biggest mountain whitefish in a river, I’ll change things up. Big whitefish will still eat nymphs, but what really gets them going is the opportunity to grab a small baitfish. In many of the streams I fish, there are sculpins, which are a favoured meal for large rockies. Accordingly, a Muddler Minnow fished tight to the bottom on a dropper rig is a super-effective way to generate big bites. In-line spinners such as Panther Martins and Mepps Aglias in the smaller sizes also work great.