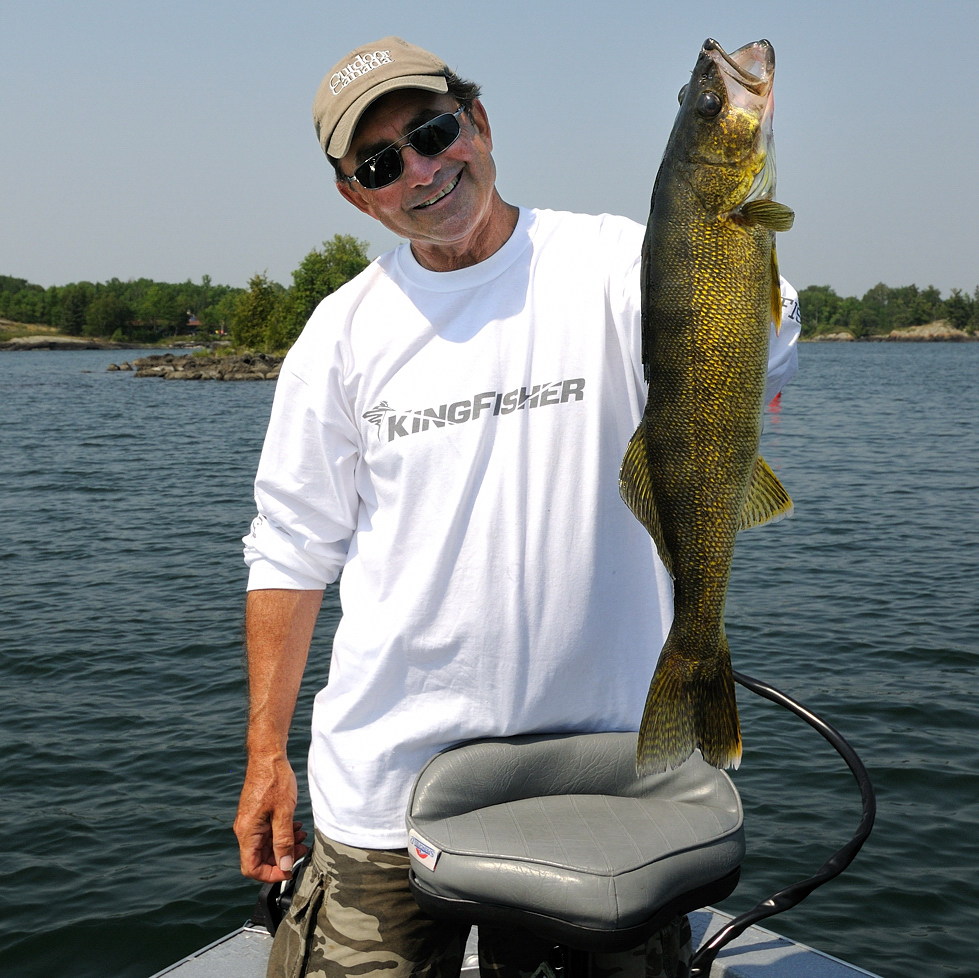 Using artificials when fishing for walleye

One of the things that always draws gasps of disbelief when I present fishing seminars at Sport Shows, is when I tell folks that I rarely, if ever, use live bait when I go walleye fishing. The truth of the matter is that live bait not only slows you down, as a general rule, you tend to catch much smaller fish when you dress your jig, crawler harness, drop-shot or Slow Death rig with it. Plus, artificial worms, minnows, leeches and the like let you avoid the hassles associated with babying and mollycoddling livebait, especially in the scorching heat and humidity we’ve been under lately.

It proved to be true again yesterday, when I met up with young friend, Jeff Muirhead, from southern Ontario.

I first met Jeff a year or two ago, when he attended a fishing seminar I was presenting at the Toronto Spring Boat and Fishing Show. He approached me afterward, we started chatting, and well, one thing lead to another and I told him if he was ever up in my neck of the woods, to give me a shout and we’d wet a line together.

As fate would have it, Jeff is now working on his Master thesis at the University of Waterloo and spending the summer in Fort Frances, where he is examining the implications of hydroelectric dam discharge practices on the fisheries in the Rainy River. It is an extremely interesting piece of research, by the way, and is part of a collaborative effort between the University of Waterloo Department of Biology and Department of Civil Engineering, Fisheries and Oceans Canada (DFO), and the International Joint Commission (IJC). It is aimed at evaluating the effects that different discharges from the International Falls Dam have on the spawning habitats of lake sturgeon, walleye, and logperch in the Rainy River.

Fortunately, our task yesterday was a heck of a lot simpler and I suspect more fun: to find some big walleyes and break Jeff’s personal best record—which he did on his very first walleye, boating a gorgeous 27-inch-plus fish.

Jeff’s first walleye of the day, a gorgeous 27-inch-plus beauty, which proved to be his best ever

Shortly afterward, Jeff hooked another nice walleye on the same Slammer-baited drop shot rig—this one being considerably smaller—but then his rod loaded up and he struggled to gain line.  When we we spotted the walleye struggling in the water below the boat, the reason for the spirited fight became obvious: A humongous pike had T-boned Jeff’s fish and was attempting to eat it for dinner. 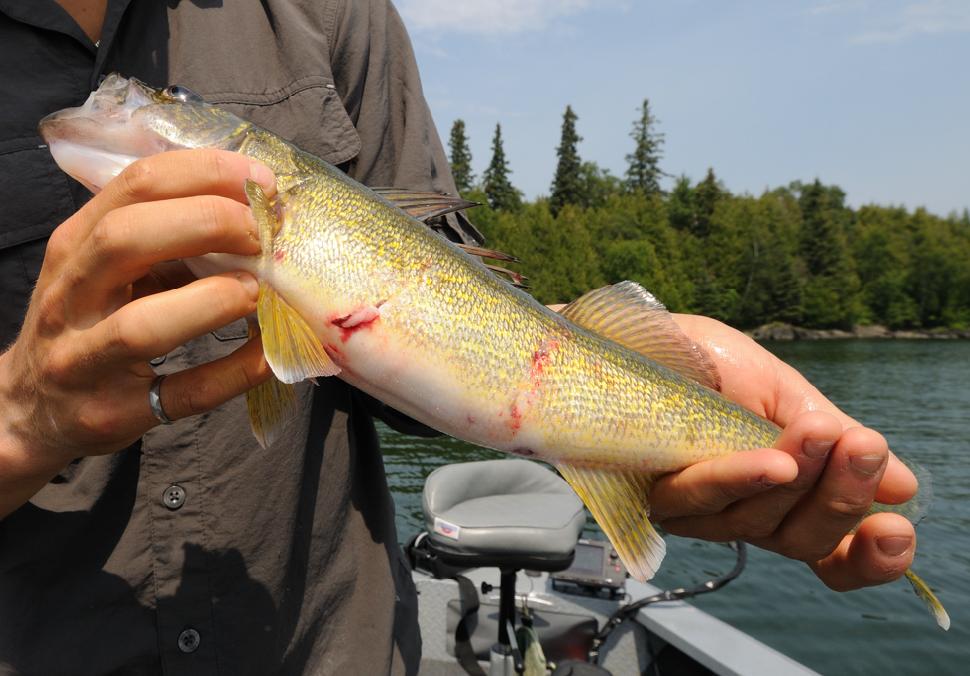 A few minutes later, my Simrad sonar screen lit up like a Christmas tree, only these bulbs were big walleyes scattered across a 17-foot deep flat, the perfect place to pull Slow Death, which was a technique Jeff had never before fished. As I was rigging up Jeff’s rod, attaching a bottom bouncer and #2 Slow Death hook, I mentioned to him that, in my experience, you will not get quite as many bites when you bait the hook with an artificial worm but you will catch many more fish. If that sounds like a contradiction, let me explain.

When you find a good number of walleye in a school, there are often so many competitive fish hitting so forcefully, like rapid, staccato gun fire, they miss the hook and tear up your crawler when you use the real thing.  As a result, you’re constantly reeling in and re-baiting.

But, when you thread a Trigger X, GULP! or Exude scented worm onto the curved hook, sliding the nose of the soft plastic over the eye, nipping off the tail so only an inch-long nub flops behind the bend and drop the corkscrewing collection over the side of the boat, a dozen walleyes can smack the tough artificial and they won’t tear it up.

Indeed, yesterday, Jeff and I were constantly feeling walleyes smacking our soft plastic corkscrewing nubs. We’d sweep our rods forward and if we missed one of the overly aggressive walleyes the first time, we’d simply drop back the bait and nail it on the second, third or fourth hit. The fish couldn’t steal our bait, couldn’t pull it down the hook, and couldn’t alter its action.

And, while there were plenty of perch mixed in with the big bruising walleyes, using scented soft plastic GULP!, Exude and Trigger X, the crawlers allowed us to catch more and bigger walleyes than would have been the possible had we been using live ones, which the perch and panfish would have nipped, snipped, squeezed, and otherwise pulled apart.

As a result, we spent the day catching one glorious hawg walleye after the other, instead of re-baiting our hooks.