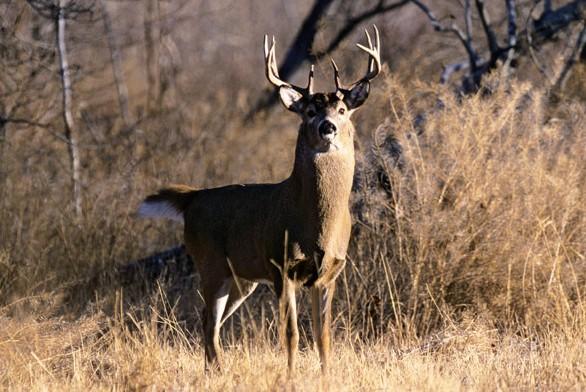 Thanks to a continuing string of relatively easy winters, Alberta boasts a whitetail herd well in excess of a quarter million head and a hunter success ratio of more than 40 per cent. Not just any whitetails, mind you, but Dakota whitetails—those chunky, big-bodied bucks with a genetic propensity for growing eye-popping headgear. I’ve seen heavy-racked bucks within the suburbs of Calgary, and some of Alberta’s biggest whitetails are regularly taken in the bow and shotgun zones surrounding Edmonton, within earshot of commuter traffic. My favourite place on the map of Alberta, however, is the area surrounding Wainwright in the eastern portion of the province. Not that it has more or bigger deer. Rather, I find the terrain a joy to hunt. I also saw—and missed—two of the biggest whitetails of my life there.

This is mostly farm country, intersected here and there with large woodlots, wooded draws and river bottoms. Since it’s primarily cattle country, you’ll find cattle trails winding up through the draws and meandering through the woodlots, providing convenient paths for hunters and game alike. Permission to hunt is usually readily granted, but community pastures in the area are another option. The only problem with the latter is that you’re more likely to encounter other hunters during the prime November general season, when the bucks are in rut. Several outfitters operate in the region, and they generally have areas set aside by agreement with the landowners. They rely heavily on stands at the edges of fields and along travel corridors to put their clients into the best possible positions. Another popular tactic is to work the edges of draws looking for bucks on the move; this is highly productive during the rut. Hunters who have friends or family in Alberta can also take advantage of the hunter-host system, which allows a resident of the province to take a guide permit for up to two Canadians a year on the proviso that the permit holder and nonresident hunt together. Typically, if the hunter-host happens to live in the area, access to private land—plus detailed information on deer movement—is readily forthcoming fromthe landowner. As is the case in Saskatchewan, plan on snow and frigid weather during the course of any November hunt; I’ve hunted some bitterly cold stretches when it hurt to step outside. That’s something to keep in mind, too, in regard to selecting a firearm for an Alberta hunt; bolt actions tend to be the most dependable through the gamut of conditions you’re likely to encounter. As for calibres, look to something flat-shooting and with the punch needed to stop a Dakota whitetail—my 7mm Rem. Mag. invariably performs better than I do on Alberta hunts. Remember, those heavy-antlered bucks can flummox even the most seasoned deer hunter.