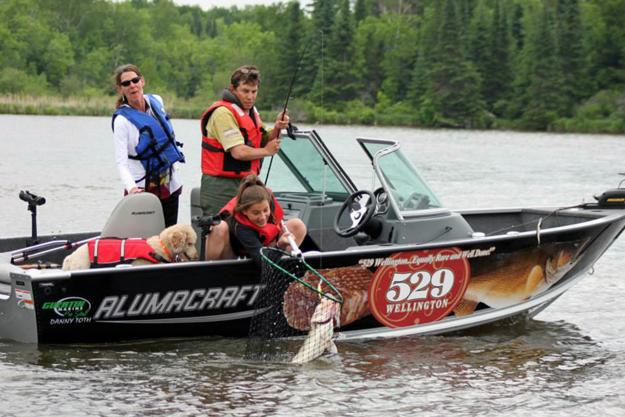 During the week, Danny Toth works as a waiter at a high-end Winnipeg steakhouse called 529 Wellington. On the weekends, he’s a prize-winning angler who doesn’t mind confiding his secret for launching a successful season of walleye fishing. “It’s my daughter Eden,” he reveals. “No man could ask for a better fishing partner.”

Teamwork is an essential part of any fishing duo, and 14-year-old Eden does more than her share of the heavy lifting, bagging whoppers such as the 10.5-pound walleye that won them the 2013 Angler Young Angler Tournament on Lac du Bonnet, Manitoba.

The elder Toth first competed in 2004, when he entered the Minaki Gary Roach Pro-Am Tournament as an amateur and posted a 9.34-pound walleye—the second-largest fish out of a field of 150 anglers. “I was quite intimidated fishing amongst all these famous pro fishermen with their fancy boats,” he says, “but everyone was very nice and welcoming and I couldn’t wait to try it again.”

As for Eden, she entered her first tournament with her dad in 2006, when she was just seven. “Our boat was of course loaded with dolls and toys,” says Danny. “And we spent a lot of time playing make believe and ‘I spy with my little eye.’”

Since then, the Winnipeg pair has been competing regularly, and with some success. After their qualifying win on Lac Du Bonnet last year, for example, they went on to win the North American Angler and Young Angler Championship in Kenora, Ontario (along with Eden’s friend Grace Cudmore). And since walleye, in particular, are one of their specialties, we asked the duo to share their early-season secrets.

Danny says every walleye opener presents unique challenges because of the weather, and his fishing strategy reflects that—whether it’s snowing or well above 0°C. His father was a keen angler himself and taught Danny to observe nature before going fishing; he now follows that same game plan with Eden. “We start the season by taking the water temperature and trying to figure out what the fish are doing,” he says. “It can be very cold in the spring, so I bring lots of warm drinks and snacks, as well as survival jackets to keep us warm in any weather.”

Use the right gear

The pair uses braided line for its sensitivity and fluorocarbon leaders for its invisibility to fish. If they’re trolling crankbaits in clear water, they use leaders as long as 20 feet. When jig fishing, their leaders are usually three feet long. For live bait, the duo prefers leeches and night crawlers. “I like to thread crawlers onto the hook, covering the length of the shaft, then pop the hook out so it’s fully exposed,” says Danny. “With leeches, I just pierce them through the sucker. I usually add a bit of Berkley Gulp! for added scent and to secure the bait.”

In early spring, walleye will be in water ranging anywhere from two to 22 feet deep. But to find them, Danny says water temperature is more important than depth. “I look for water that’s 60°F or warmer,” he says. “A small creek emptying warm water into a bay is ideal. So is a shallow, rocky-bottomed bay with good sun exposure.” The pair searches for walleye by cruising a Z-pattern and marking any fish they see on the graph. Says Danny: “Once we have a dozen or so waypoints, we troll slowly over the area with a jig and a leech.”

Walleye are attracted to flowing water, but when they’re tired after the spawn, they tend to gather in back eddies and along current edges. “They’re looking for a meal to come to them, so I happily oblige with a leech on a single hook and a split shot,” says Danny. “We drift downstream with the motor off and let the bait bounce along the bottom to the waiting fish.”

As the water warms up, and the post-spawn feeding binge begins, the walleye will focus more on current and current edges. “For big walleye, you can’t beat trolling in current with a perch-pattern crankbait,” says Danny. If the current is particularly strong, he’ll use lead-core line and a longer rod, usually a Fenwick flipping stick with lots of backbone and a fast tip. “I like to troll at 2.2 miles per hour, and holding the rod can be quite tiring, so it’s not the best for kids. And frankly, it’s also quite boring. But it’s a good way to catch those big ones.”

Danny says he often hears anglers complain about the difficulty of catching walleye during mayfly season (see “Mayfly mayhem” on page 22). He sees few anglers with mayfly nymph or larva patterns in their tackleboxes, even though it’s what the fish are feeding on. He does well in mayfly season by drifting across mudflats with conventional spinning gear, using a nymph fly pattern tied onto a fluorocarbon leader weighted with a small split shot. “Let it drop to the bottom, then drift it very slowly. You won’t feel a bite, but then you’ll have a fish on.” He’ll also tie the fly behind a bottom-bouncer and slow drift, letting the bouncer stir up the mud bottom.

“You can’t beat a jig for catching walleye,” advises Danny, saying he prefers the Nuckle Ball jig because it has a thin, strong hook and a slightly wider gap that increases the rate of solid hook-ups. “It rides with its nose down and its hook up, which reduces snags and makes it easier for the fish to grab it,” he says. “And the flat head imparts a wiggling motion to the worm or leech.” Last year, they caught 99 per cent of their walleye in the Lake of the Woods tournament using Nuckle Ball jigs—in pink, of course.

Danny says he’s surprised by how many anglers debate favourite lures and rods but rarely discuss techniques for getting a good hookset. “Eden has developed very good hands, and I smile when I watch her working with a gently nibbling walleye,” he says, explaining that he’s taught his daughter to lower the rod tip, gently reel down on the fish, lift until she feels pressure, then set the hook. “If there’s no pressure, that’s okay. The bait is still working. Leave it there until the fish returns, then repeat the process.”

Work as a team

When Eden was very young, Danny encouraged her to set up her own “bait shop” at the back of the boat. “I’d bring a pocketful of change, and every time I needed a crawler or leech, she’d sell me one for a dime,” he says. “It was a little game that really kept up her interest.” He says she’s old enough now to bait her own hooks, but he still takes a good look to make sure the bait is presented properly.

Eden says she enjoys winning tournaments, but that’s not the main reward. “Tournament fishing allows me to spend top-quality time with my dad and learn new skills and techniques together,” she says. “I also like it when we have a newcomer in the boat and we can teach them our special secrets.”

Jake MacDonald is a long-time Outdoor Canada contributor, and a fair-to-middling walleye angler.