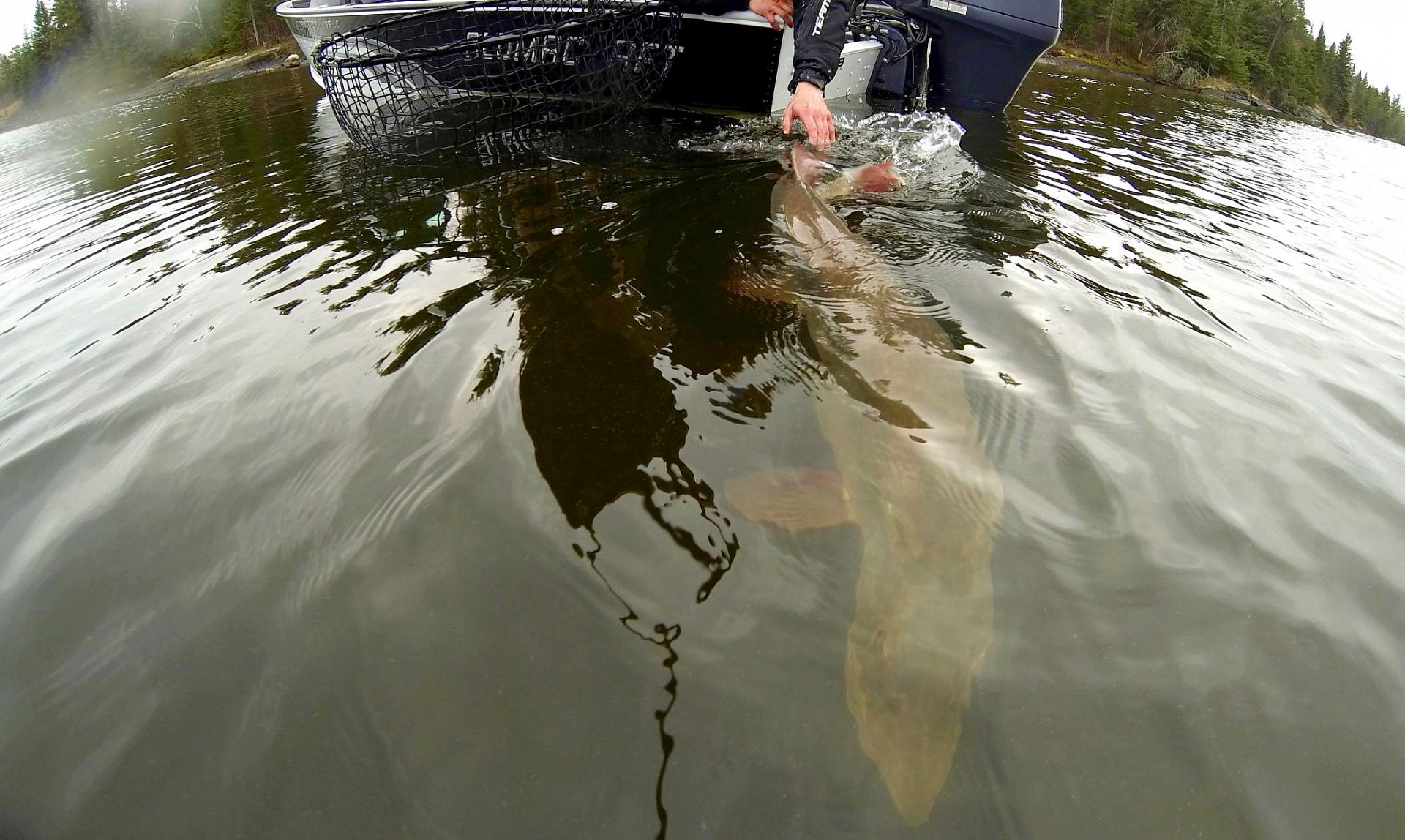 I was out on the water yesterday and the temperature was in the mid-50°F range, which means the fall muskie bite is in full swing.  And it is only going to get better as the water temperature continues to chill throughout the month of November.

As a matter of fact, the three biggest muskies I’ve ever caught, including my personal best that, based on length and girth conversion calculations, weighed 57.5 pounds, all came in November.

Something else I’ve always found fascinating is that these late fall fish are different than the ones we typically catch during the rest of the year. Fall muskies are as bright chrome as freshly minted silver dollars, and typically display no split fins or damaged tails

—signs they’ve been caught before and released. For years we have called these late fall muskies “virgins” and I’ve always equated them with the big “ghost” bucks that you only see for the two or three weeks of the rut.

Which brings me to the question of the day:  Wouldn’t it be something if there were twice as many of these giant muskies swimming in our lakes and rivers?

Well, guess what? It’s not a pipe dream. There is a way we could almost double the number of mammoth muskies and better yet, it wouldn’t cost a penny to accomplish.

Good friend and former OMNR colleague Dr. John Casselman is renowned for the Muskie Cleithrum Project that he and the late Dr. Ed Crossman, from the Department of Ichthyology and Herpetology at the Royal Ontario Museum, initiated back in the 1980s and early 1990s. John and Ed reviewed the catches of over 74,000 muskellunge and carefully examined the cleithrum bones—the small bone that rings the gill flap—from another 2,400 trophy muskies that they received from taxidermists and natural resource agencies across the continent.

The information they assembled represents one of the largest muskie data banks and from it they were able to document for the very first time, changes in the length, weight, maximum age and mortality of muskies. What I always found interesting about the Cleithrum Project is that it chronicled the meteoric rise in the popularity of muskie fishing and the spectacular transition from killing the big fish to catching and releasing them.

Indeed, as recently as the 1970s, 70 per cent of muskies were kept, whereas by 1994, more than 99 per cent of the fish were released. It is testament to the amazing success of catch-and-release angling and modern muskie management with protective size and creel limits. 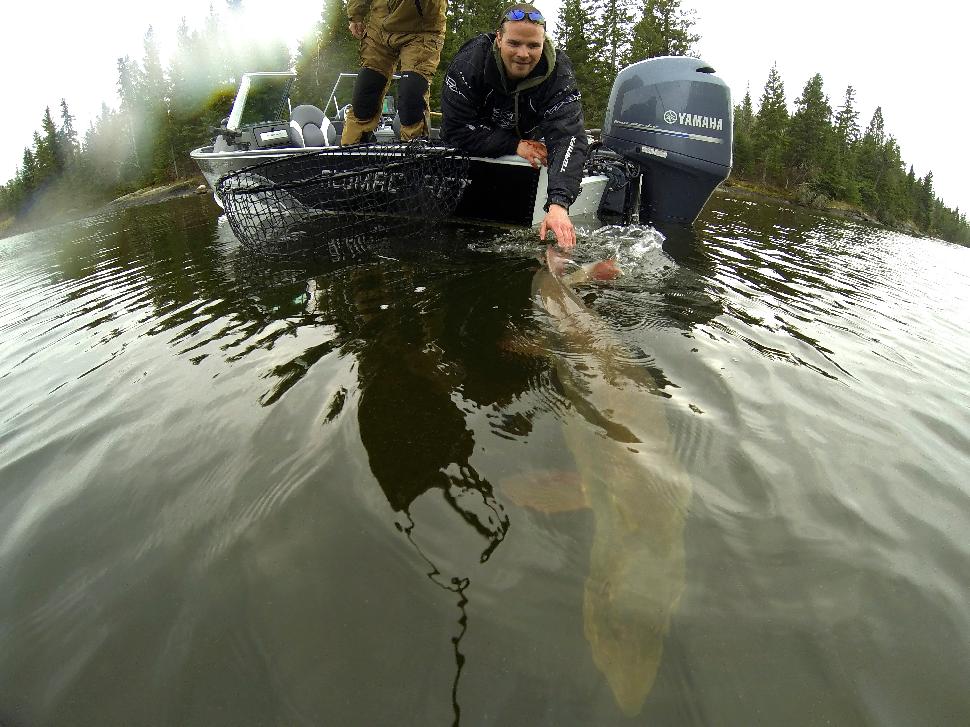 If we could reduce the handling mortality of big muskies, like this beauty being released by Lake of the Woods guide, Darcy Cox, by only four percent we would increase the muskie population by a staggering 70-percent

Crossman and Casselman were also able to show that the benefits of returning large muskies unharmed to the water resulted in an increase in the mean length of the fish, which was precisely the news that muskie anglers wanted to hear.

But the cleithrum study also showed something else.

Now, the difference of a couple of years may not sound significant. But remember that fish spawn throughout their lives, the biggest muskies lay more eggs than the smaller fish, and that the mammoth muskellunge nearly always result from the very largest year classes.

When we view it in this context, Casselman and Crossman concluded that we would need a 70 percent increase in annual recruitment to ensure the same number of fish reach their maximum age and thus, maximum trophy size.

Now, let me read your mind.

I bet you’re wondering, if 99-percent of muskies are being released, how could the age of the oldest, trophy size fish be decreasing?

Two likely reasons: the ranks of the muskie fraternity are swelling at the same time that our knowledge base is better than ever before. There are quite simply more of us muskie anglers, we’re better skilled, better equipped and we’re catching more fish.  And, while we’re putting them back, catch-and-release only works if the fish survive.

Or, to put it the way good my friend and legendary muskie angler, Dick Pearson puts it: ego kills.

Take a look at any social media site these days and you know what he means.

Gotta’ give Dick credit, too, for walking the talk.  He wrote the amazing, Muskies on the Shield, one of the most comprehensive “how to” books on muskie fishing, but if you recall the front cover, it doesn’t feature an angler holding a muskie as you would suspect, but rather a beautiful Lake of the Woods sunset. I know, because I took the photo and gave it to Dick.

He has caught more big muskies than almost any angler on the planet, and yet, almost every time I call him for a photo to illustrate a feature on which I am working and have interviewed him, he tells me he doesn’t have any. Like I said, Pearson walks the talk. He keeps his fish in the water at all times, and handles them exactly like what they are: the proverbial geese that lay the golden eggs.

And if we all did the same thing this fall, and for the rest of our muskie fishing careers, and in the process reduced the handling mortality of the oldest and biggest fish by just four per cent, we would initiate the same effect as if we had increased the annual recruitment of muskies by a staggering 70 per cent.

Let’s give Casselman and Crossman the last word on the subject: “The largest trophy muskellunge in the population are usually the oldest individuals.  The largest year classes produce the greatest number of old individuals; hence, extremely large year classes are required to produce the largest, oldest trophy muskellunge.  If catch-and-release methods can be improved to reduce mortality, they would have the same effect as increasing recruitment and would help maintain year-class strength, longevity, and the size and number of trophy fish in the population.”