The prognosis is positive for bear, elk, moose, mulies, whitetail and more

Our exclusive forecast of this year’s hunting opportunities for big game and predators in Manitoba, Saskatchewan and Alberta. For upland birds and waterfowl, see Part 2.

Are you ready for a great fall afield? Thanks to the relatively mild winter across Western Canada this year, most game populations appear to have fared much better than average—a good thing after the recent string of really mean winters. This is especially so for deer, which have had a rough time over the past five years or so.

The upbeat forecast might be somewhat tempered, however, by the very dry spring in many areas, which thwarted plant growth. For big-game animals, early spring forage is the most important food of the year after a winter of browsing mostly on dead, dry vegetation.

For the most part, though, the forecast is positive, with something for hunters to look forward to in all three Prairie provinces.

The province enjoyed a pretty good winter this year, without serious snow or overly cold temperatures. There was some localized rough weather, but overall, a strong carry-over of game animals is expected. This is very welcome news for hunters, having endured a couple of unkind winters that were particularly hard on deer. In general, the hunting prospects for this fall look good.

The recently reopened bison hunt near High Level is very popular with hunters, and for good reason. While the odds of being drawn are long, the reward is a rare hunting opportunity for a huge game animal—complete with high hunter success.

The best opportunities for black bear hunters are in the southern portion of the Northern Boreal wildlife management units (WMUs) and the Foothills WMUs. That said, bears can be found just about anywhere in the province. Overall, the supply of bears exceeds the hunter harvest, so if you buy a bear tag you’ll have great sport and limited competition. Check the regulations to learn where baiting is permitted, and where a second tag is available.

The only notable change for elk hunters is more opportunities, including more permits for bull elk around Canadian Forces Base Suffield. There will also be a new hunt for elk in the Prairie WMUs, where the objective is to keep numbers low to reduce agriculture conflicts. Similarly, elk-hunt opportunities will continue in the northwest and Parkland WMUs to manage herds adjacent to farmlands. 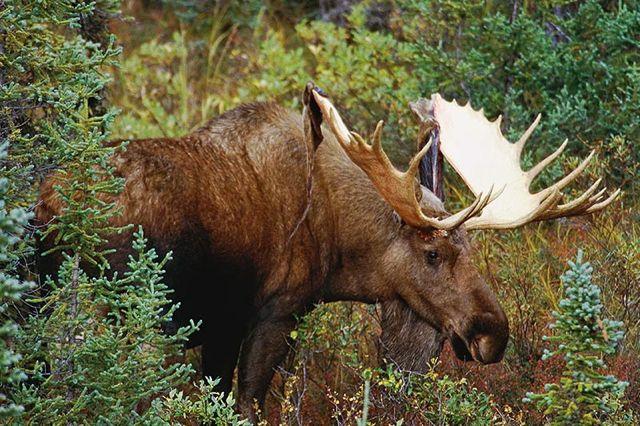 Populations are stable, over-winter survival is expected to be high and winter ticks have not been a serious issue—a most promising forecast for moose hunters. There is one significant regulation change of note for bowhunters, however: the number of moose available to archers will be restricted in the nine WMUs northeast of Edmonton.

More good news for Alberta hunters: there will be a new hunt offered in 2015, in addition to the small number of licences available for the Blairmore region and the Willmore Wilderness Park.

The past relatively mild winter will have helped the recovery of mule deer in the northern parts of the province, where a series of harsh winters had reduced populations. Further south, though, where the past few winters were not such an issue, mule deer numbers are robust. Hunting prospects, particularly in the Prairie WMUs, look very good. No regulation changes are anticipated.

Things are looking up for this species, and for hunters. Hunting was significantly reduced following the bad winter of 2010/11, but thanks to a couple of relatively mild winters, recovery of the pronghorn population appears likely. Summer surveys, underway at press time, will confirm the population status, and determine the hunting opportunities.

There’s been a steady decline in white-tailed deer numbers over the past couple of hunting seasons due to unfriendly winters. The good news is that the most recent winter was an easy one, and whitetails have the capacity for rapid population recovery. While the hunting won’t be as good as five years ago, the outlook at least promises to be better than last year. Until deer numbers recover more, however, the reduced hunting season will remain in place.

For most of the province, but especially in the south, the past winter was mild and green-up came early—a good combination for encouraging winter carry-over of game animals. Deer hunters, in particular, will welcome the news after a string of bad winters took a toll on their favourite game animal.

Stable to increasing is the general assessment of Saskatchewan black bear population, which is very good news for hunters. Hunting this species can be interesting because roughly 25 per cent of the province’s bears sport brown, cinnamon or blonde coats. The animals can be found pretty much anywhere across Saskatchewan, but the highest numbers and the highest harvest by far are from the forested wildlife management zones (WMZs), particularly near farmland. Good bets are WMZs 56 to 73. 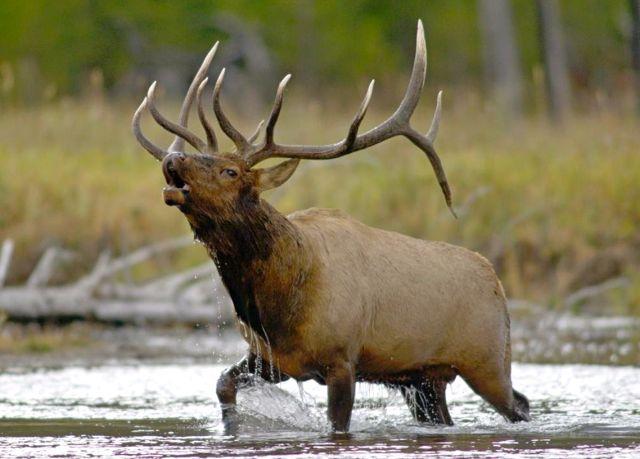 Populations are strong—again, excellent news for Saskatchewan hunters. Elk are most common in the forest/agriculture interface, in a band stretching from Lloydminster to Prince Albert to the Manitoba border north of Yorkton. There are also smaller populations scattered throughout farmland in the southern half of the province, wherever there’s sufficient forested cover. Note that the liberal either-sex elk hunt around Moose Mountain Park (WMZ 33) has achieved its population management objectives. As a result, the hunt will be draw only starting this fall.

The population trends for moose differ in various parts of Saskatchewan. The good news is, numbers are stable in the southern boreal forest WMZs and the western part of the province. Unfortunately, though, the eastern zones are seeing population declines. Moose numbers in the farmland zones may also be dropping, but that’s due more to the liberal licence quotas of recent years. Hunter success for moose in the farmland zones has been almost 80 per cent.

For much of Saskatchewan, mule deer populations remain below management objectives, although the species appears to have handled the recent string of severe winters better than the province’s whitetails. Mule deer are found primarily in the southwest; they’re especially strong along the South Saskatchewan River in WMZs 8 to 14. The mild winter in much of the south stands to bolster numbers and therefore improve hunter success this fall. The prospects may not be excellent, but they’re still pretty good.

Saskatchewan’s pronghorn populations are still recovering from the mortalities associated with several previous severe winters. In fact, numbers are still down by about 40 per cent. There has been some recovery, however, and a small hunting quota will be offered this fall outside the September pronghorn breeding season. That’s good news for hunters, who’ve seen the season shut down for the past few years. 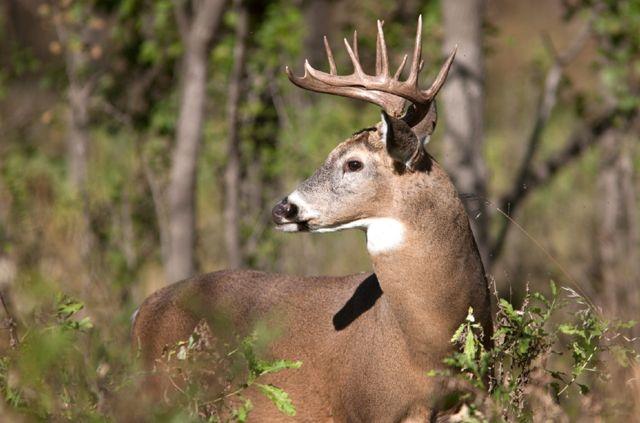 There is no way to sugar-coat it—whitetail populations are down following the consecutive nasty winters of 2011-12 and 2012-13. Historically, the highest whitetail numbers have been in the farmland and parkland WMZs, but those populations were hit particularly hard. Hunting regulations have been adjusted accordingly. Deer numbers are also below population objectives in the forest and forest fringe zones. This past mild winter and early spring green-up will help in the recovery, but it can take several years to erase the impact of a bad winter. While hunters should not expect a banner season for whitetails, they’re encouraged to participate in the voluntary harvest survey to help game managers make future regulation decisions.

This past winter in Manitoba was an easy one—so easy, in fact, that scheduled moose surveys could not be completed due to the lack of snow in January. This most unusual occurrence is welcome news for the province’s hunters, who’ve seen fewer hunting opportunities due to declines in some game populations. However, there are some strong game populations. Add in the favourable winter, and the hunting prospects are looking up for the fall.

This continues to be a bright spot for Manitoba hunters, particularly deer hunters, who may otherwise be disappointed this fall. The province boasts a high proportion of bears with colour phases other than black, as well as truly big bears. This past spring, for example, a 595-pound bear just out of hibernation was killed on a highway west of Riding Mountain. In peak condition after a summer of feeding, it would have been a very large fall bear. 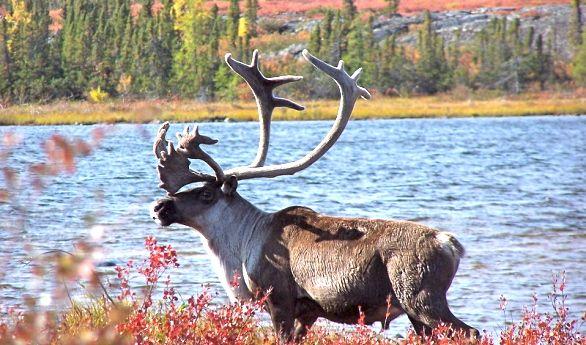 Caribou hunters have perhaps the rosiest forecast for the coming season. The big herd along Manitoba’s northern border is doing really well, and has not suffered the declines seen in other northern herds. Game numbers are robust, the season is generous, hunter success is traditionally high and the hunting prospects are even better than last year.

The reports on elk are mixed. Overall, this species is doing well and hunter success is typically high, and that should continue. The Interlake and Spruce Woods populations are stable, but recent surveys in the Duck Mountains found a population decline, resulting in a reduction in hunting opportunities.

More and more Manitobans are taking an interest in wolves, looking to extend their hunting recreation into the winter. Incidental counts during moose surveys suggest that even with this harvest, wolf numbers will remain stable. To get a better picture of wolf movements and interactions with other species, plans are underway to capture a number of the animals and affix them with radio collars.

As with elk, the reports on moose numbers are also mixed. The bad news is that several populations are facing challenges. Recent surveys added the Turtle Mountains to the Porcupine Hills and Duck Mountains as areas with very low moose numbers. As road access expands across the province and natural refuges disappear, moose are increasingly vulnerable to hunting. The areas of highest concern have been subject to conservation closures—that is, no hunting by anyone. There are some indications of population recovery, but moose hunting will not be opened in these areas this fall. On the upside, moose numbers across the north are stable, with increases reported around Riding Mountain National Park, as well as in pockets of suitable habitat in the farmlands.

The bad news is that recent surveys have found deer populations are still down because of a series of nasty winters. That means the reduced hunting season will continue for at least another year. The good news, though, is that there’s some population recovery thanks to this year’s relatively easy winter. Whitetails are not yet as abundant as they were a decade ago, but numbers are up and hunting prospects have improved over last year.