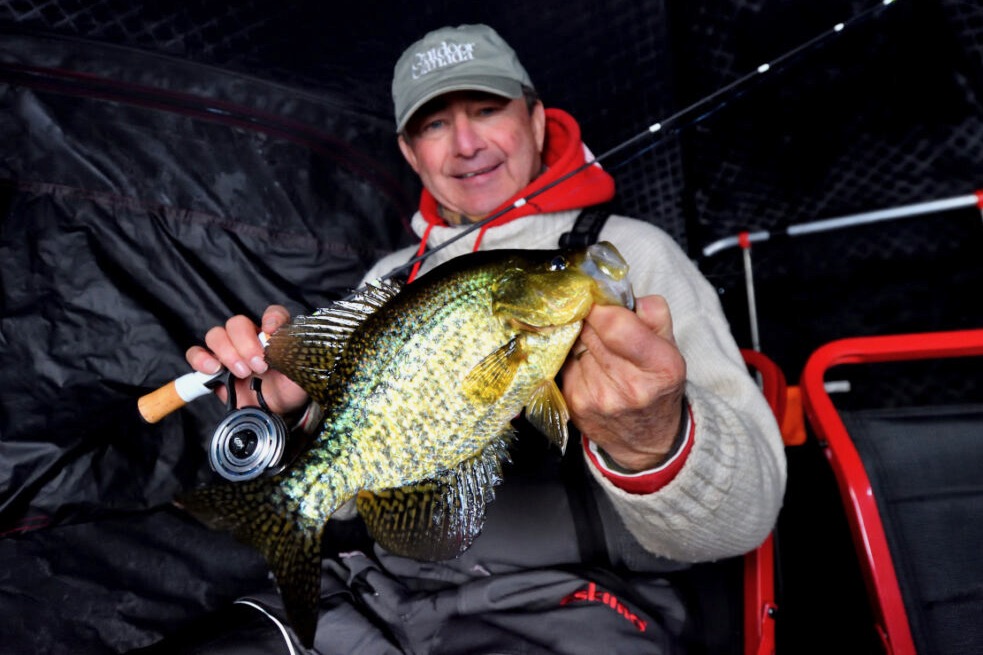 When it’s too cold to run-and-gun, look for these prime ice-fishing spots

Forced to Camp Out

When stuck in one spat, set up over complex underwater structures

This winter has been an ice-fishing season of conflict, what with the super-cold temperatures, heavy falls of snow and now slush covering so many lakes. If the thermometer isn’t dipping into the -30° C range, it’s snowing so hard that I can’t find any more spots on the front lawn to pile it up. And the weight of the snow on the ice is now forcing water up through the cracks, crevices, holes and seams so there is slush underneath. In a word the conditions are brutal.

That’s especially since I’ve always considered moving around be one of the key factors behind our ice-fishing success. I’ve calmed down a lot from the run-and-gun days of my younger years, when we’d hit eight, nine, 10 or more spots on the lake, and drill at least 100 holes. I remember one time when seven of us augered over 200 holes in a single day.  We caught and released 36 lake trout that day, with two of them nearing 20 pounds.

But the conditions we’re facing this winter aren’t affording us this luxury, so we are camping out—that’s my term for fishing just one spot—much more than we’d normally like to do. At -30 C, with a gusty 40-kilometre wind, you’re forced to select a spot, set up the shelter, turn on the heater and stay put. So picking the right spot to fish is more important than ever.

That’s precisely what I was thinking about the other day, when I kicked back in the La-Z-Boy, with the fireplace on high, and my Humminbird Ice Helix 7 on my lap. I was studying the thousands of waypoints I have punched into it, looking for one thing: the relatively few structures that offered the greatest complexities and variety of options.

In other words: underwater points, rock piles, shoals and shelves that offered shallow feeding areas, but also quick access to deep water. Funny thing, too, but I have enjoyed more good walleye action this winter in outrageously shallow water—I’m talking less than 10 feet deep—than in the past several years. And that’s not only at first and last light, but even mid-day.

Interestingly, too, several friends have confirmed the same hot shallow walleye bite. Alberta-based buddy Ryley Stephani, for example,  sent me a message the other day saying that he had been walleye fishing in his favourite mid-winter 30-foot depth with no luck. He continued: “We then moved 50 yards into a surprising five feet of water, and were catching walleye like crazy. It was very sunny, so I was quite surprised to catch them in five feet of water at 2 in the afternoon.”

Having experienced the same thing this winter, I have a theory. I think the heavy snow cover has darkened the lake below the thick ice, eliminating virtually all light penetration, so the walleyes are feeling much more comfortable in much shallower water at high noon.  Still, as Ryley noted, he was only 50 yards away from the security of much deeper water.

The other thing I always look for when camping out on one spot for the day, is a structure that offers multiple stair-step-like feeding shelves. Lake Simcoe trout and whitefish ace, Justin Girard and I often compare notes behind the scenes and Justin loves the ledges and plateaus as much as I do.  He calls them “shoals on top of shoals.” Justin says, “I start fishing on top of a shoal as the sun is coming up and the trout are feeding heavily. Then, as the fish drop down to the next level, I will continue looking for them, until I reach the basin.”

I like following the fish up and down the same way, but when I am forced to camp out, I’ll set up on the middle ledge and typically find the action hot and heavy for half an hour or so, and then cold and slow for at least the same length of time. And it typically remains this spasmodic way throughout the day. I’m certain the fish are circling the structure at their leisure, following shade lines, cruising up and down and checking the flatter plateaus.  So if you, too, find it too cold to run-and-gun, keep an eye out for these special fish-holding locations.