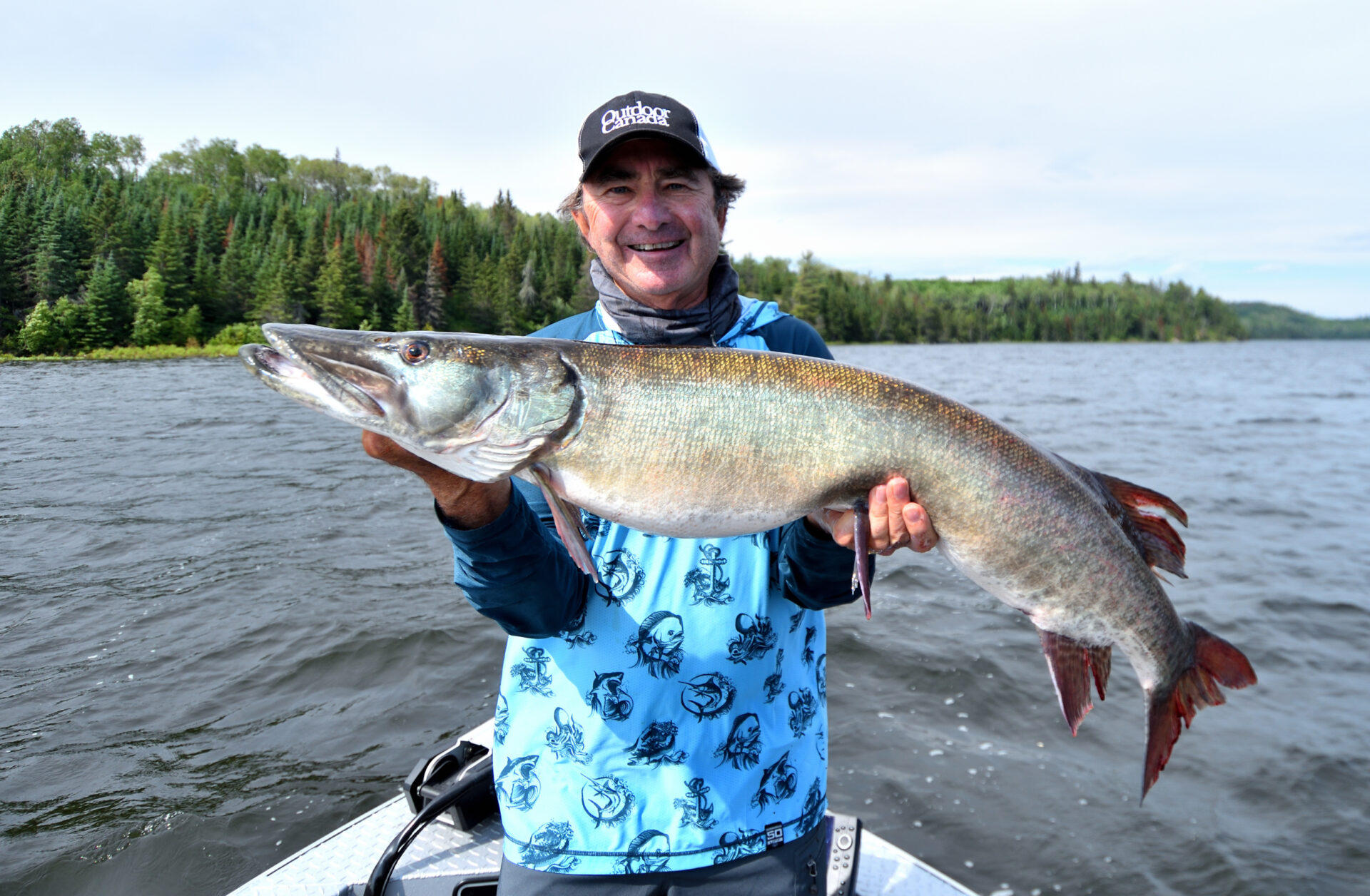 Why do muskies gulp air? The answer will surprise you

Experts weigh in on the toothy critter's curious behaviour

I was texting the other day with friend, Charlene Snow, the owner of  Eagle Lake Island Lodge located between Vermilion Bay and Dryden, Ontario. Charlene is a muskie-fishing fanatic like me and reported that several of her guests this season have spotted muskies swimming just below the surface with their heads exposed and their mouths wide open. Why in the world would a solitary apex predator behave this way, she wondered?

I’ve had muskies show up unannounced when I’ve been fishing and suspend just below the surface, all the while watching me intently, but I’ve never witnessed one with its head and mouth above the water in a Loch Ness pose. So I contacted two of the brightest minds in the muskie science field to get their thoughts on what the fish may be doing.

Dr. Sean Landsman authored the brilliant Project Noble Beast when he tracked muskies on the Ottawa River. Sean is currently an instructor at the Institute of Environmental and Interdisciplinary Science, at Carleton University in Ottawa and president of the American Fisheries Society’s Science Communication Section. He suspects the behaviour is related to buoyancy regulation.

“Muskies are physostomous, so they have a little duct that connects their swim bladder to their esophagus and thus, the outside world,” he says. “This means they can gulp air to try and increase buoyancy or burp air to lose buoyancy. But why they need to do this is unclear. Are they having some sort of physiological issue that is preventing them from moving gas into their swim bladder? Did they just eat a large meal and need to compensate for the added weight by increasing buoyancy? To the latter, there’s some research with farmed salmon smolts that demonstrate smolts gulping air after ingesting lots of food.”

Winter lake trout and whitefish anglers are familiar with how physostomous species will burp air out of their swim bladders to compensate for the pressure change when they’re hooked and brought to the surface. Walleye, yellow perch and bass anglers, on the other hand, are aware of what can happen to non-physostomous or physoclistous fish. Being unable to regulate their air bladders and compensate for a change in pressure, their bladders swell up like balloons when they’re brought up to the surface from deep water, making safe release problematic. 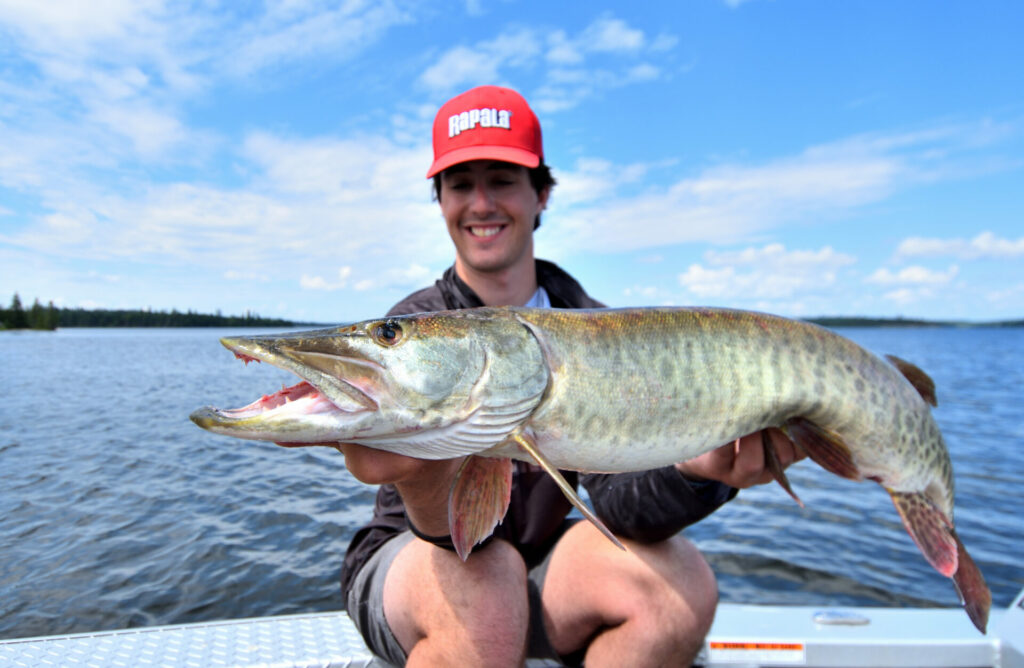 “Sturgeon are a good example of a truly physostomous fish,” says Dr. John Casselman, who was the Senior Research Scientist with the Ontario Ministry of Natural Resources and co-author of the renowned Muskie Cleithrum Project that paved the way to modern muskie management. “In our telemetry studies on the St. Lawrence River, we found them to be very specifically velocity-sensitive and well off the bottom, primarily gliding in the preferred current velocity of approximately 0.12 to 0.16 m/sec. They do porpoise and our observations of that suggested that it’s almost invariably at midsummer temperatures, and porpoising is quite common, with a number of fish performing it even on the same day. I feel that this is a good example of buoyancy regulation. It is a high-water-temperature problem. I know this doesn’t relate directly to muskellunge, but it sets the state for my perceptions about muskellunge,” he says.

Casselman goes on to explain more about this curious behaviour:

“I don’t know of muskellunge porpoising, but they sometimes swim with part of their head and mouth protruding above the surface. I have only ever seen this once or twice, and it’s usually large fish. And I would suggest that it is rather rare. I think, however, that it has a seasonal component and is also at peak water temperature.  I don’t know of any good studies that could help us understand why muskellunge do this, and I think almost anything we would suggest here would be quite speculative. But for me, I have developed a mental placeholder of this activity as being related to relatively low oxygen. I’ve noticed that it appears to be related to large fish, and they may have trouble acquiring oxygen at high temperature, hence they are using the surface filament to acquire a higher concentration. The gill surface to body ratio no doubt decreases in large fish. My feeling is that muskellunge are attempting to increase their oxygen intake with this activity. I also feel that muskellunge, which are much more highly evolved than the sturgeon I refer to above, may not have such a well developed physostomous system, hence they are unable to take advantage of filling the swim bladder with more oxygenated surface water as is the case with sturgeon, which I think actually gulp air.

“Somewhat related to this: it is not uncommon to see a muskellunge in stress having trouble with equilibrium and with a relatively large swim bladder. So this suggests to me that they are unable to degas that very well, as is the case with other species that will actually burp. So the long and the short of all this is that I think anything here is sheer speculation, and I’m a bit skeptical of the large meal theory. Most esocids, when they fill their stomach, become relatively inactive. That in itself reduces oxygen demand and diverts oxygen requirements to digestion and away from the muscle requirements.”

As John concludes …. all of this makes for interesting food for thought.