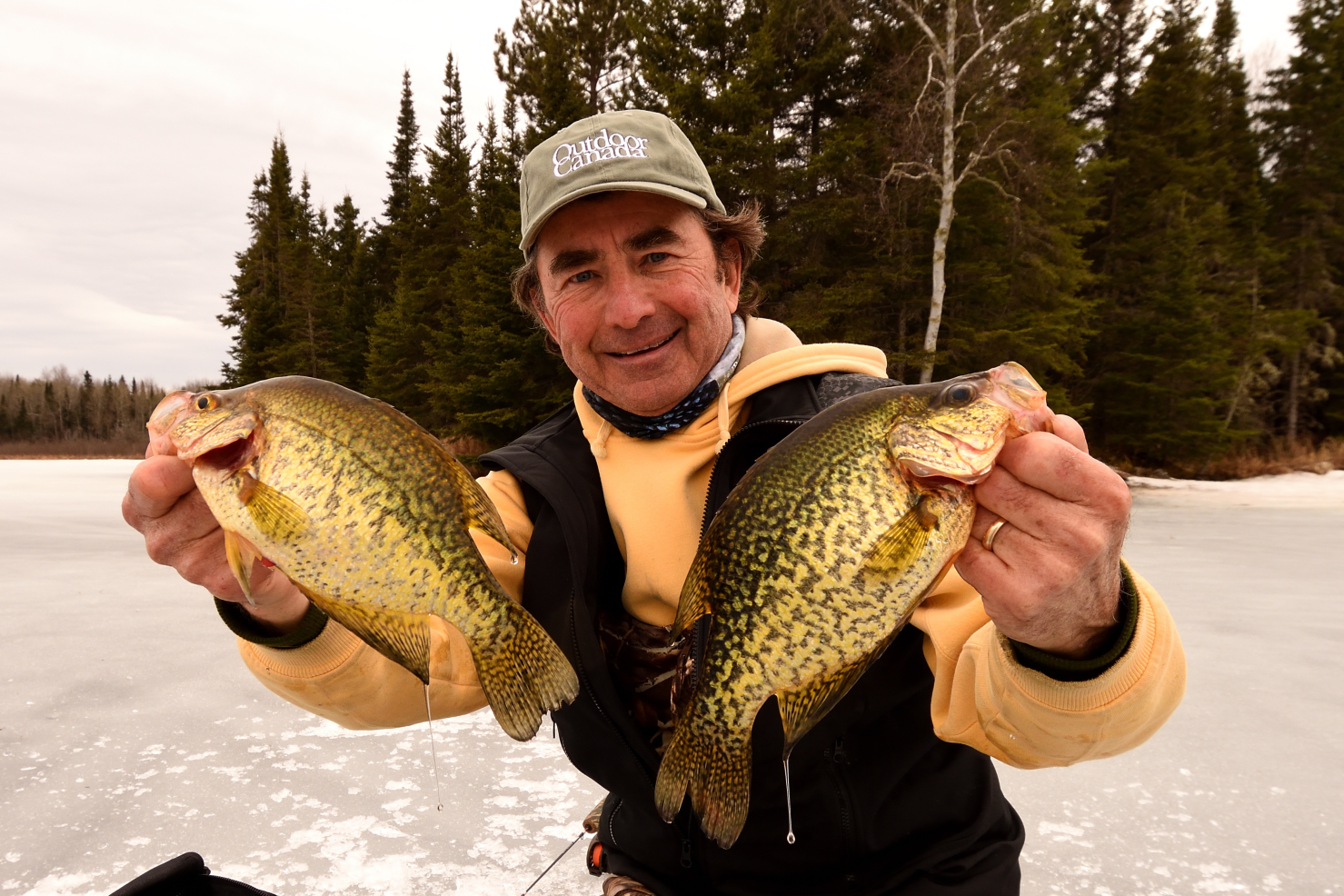 It sometimes pays to leave fish, to find fish. Here’s why

Should you stay or should you go?

Some fishing rules are made to be broken, and this is one of them

You often hear anglers talking about how they “fired up the school” and enjoyed a slugfest of enormous proportions.  Maybe you’ve even been lucky enough to experience it yourself, either in the open water season or while you were ice fishing, as I was the other day for black crappies.  As a matter of fact, I was blessed to enjoy the experience twice last week, and I am still pinching myself to make sure I wasn’t dreaming.  But I’ve got the screenshots of my Helix Ice 7 to keep me sane.  The experiences even caused me to pause and rethink the fishing maxim that you never leave fish to find fish.

I still believe that advice is generally sound, but after unsuccessfully playing cat-and-mouse with several individual crappies that I could see on the sonar screen, in several of the holes I had drilled, I said good riddance to the tight-lipped buggers and kept drilling into new territory.  Yep, that is right, I broke the rule, and left fish to find fish, and man, oh man, did it work out for me.

Imagine dropping the transducer down the hole after you cleaned out the slush and seeing the image below. My heart didn’t just skip a beat, it started pounding wildly.  I hit the proverbial motherlode.  Do you think there were a crappie or two down there? 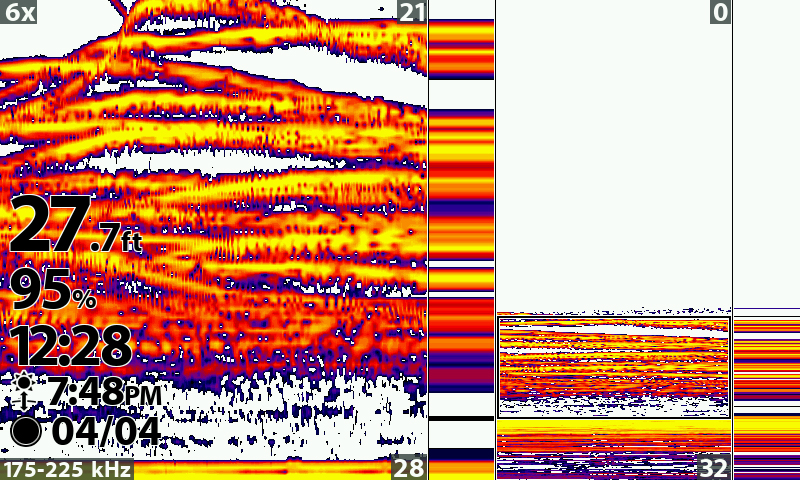 More importantly, however, the split second my Freedom Minnow cleared the bottom of the ice, I watched two or three fish rush up, as though they were in a race, to get to it before the others. How they could see the tiny lure 20-some feet down is beyond me, but see it they did.  And it continued this way for the better part of an hour. The faster I caught and released the fish, the faster the others raced to eat the lure. As a matter of fact, I caught and released so many crappies that I reached into my tackle bag and started dropping down baits to see if I could find anything they wouldn’t devour. I couldn’t.

That is the power of competition, and greed.

Now, fast-forward a couple of days and I am on another lake. It’s one I’ve never fished before, but I have heard rumours that it harbours crappies. I studied the lake map for hours and circled every likely hot spot on my Navionics app until I was confident that if the rumours were true, I’d find the fish.

I marked nothing on my sonar screen at the first few spots I stopped to check, but then at the third or fourth location, I saw the image below. You can clearly see what I am certain is a suspended crappie, plus my lure a foot or two above it.  The crappie is flat lined—both literally and figuratively— while you can see the tiny nods and shakes I was imparting on my lure. Yet I could not get the fish to budge. 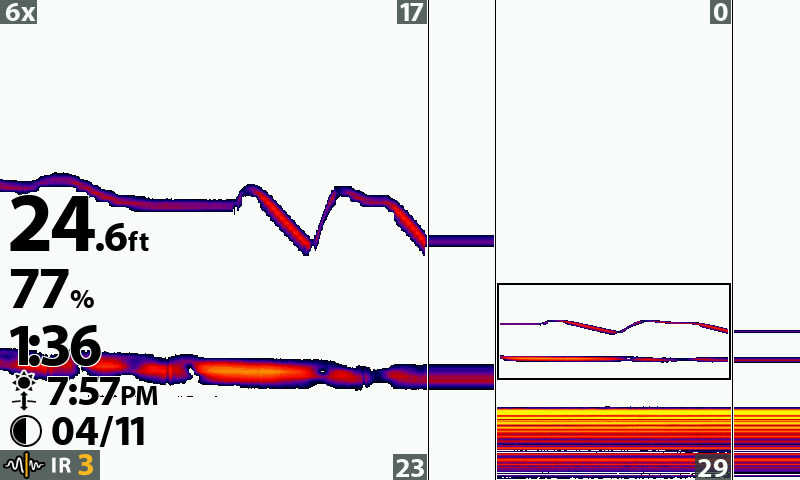 So, rather than waste my time on it, or any other individual fish I spotted, I kept drilling holes until I marked at least two or more crappies. And that is when it happened again. The top line on this screen shot is my lure and you can see the upside down V-shape where I jigged it fairly aggressively. And you can see what happened when the crappies thought it was going to disappear on them.  They streaked after it in tandem and chased it down. 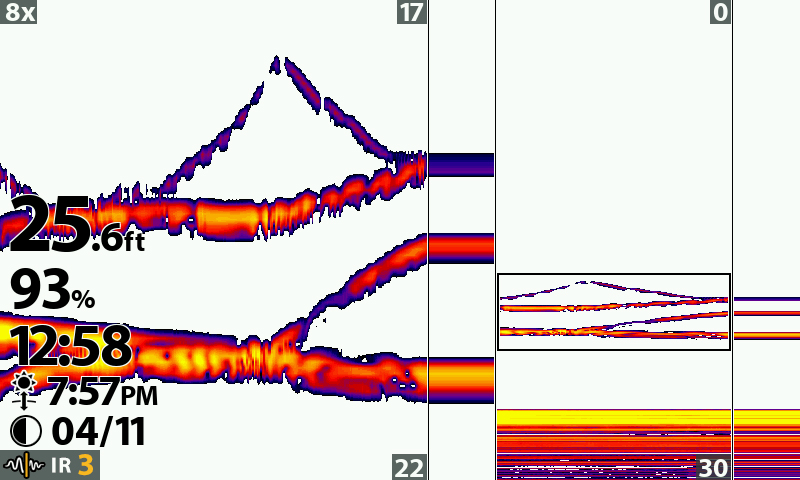 In summary, it reinforced three things for me. The first is the benefit of competition. The second is the importance of firing up the school. And what is the third?  Yep, it sometimes pays to leave fish to find fish.

Catch Gord on the Outdoor Journal Radio Show live every Saturday morning 8:05AM EST. If you’re in southern Ontario, tune your radio to Sportsnet 590 The FAN AM or visit www.fan590.com and listen live online.