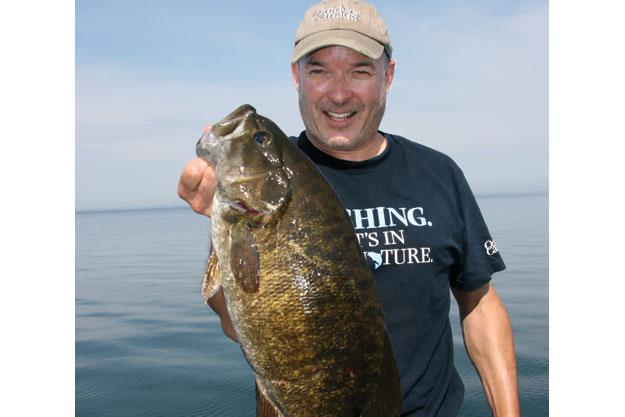 Why it’s the best time to catch giant smallies

If you thought the Bronze Age ended 4,500 years ago, you haven’t fished for smallmouth bass lately. Canadian bass fisheries are thriving—just consider recent tournament stats. Less than a decade ago, if you had any hopes of winning a bass tournament in Canada, you typically had to target the bronzeback’s bulkier largemouth cousins. Back then, a four-pound smallie was considered the trophy of a lifetime. How times have changed.

Even in once popular largemouth havens, such as southern Ontario’s Rice Lake, smallmouth bass are now dominating the big cast-for-cash events. And four-pound smallies are so common today in lakes such as Simcoe, Erie, St. Clair and Ontario that a five-fish tournament limit of four-pound bronzebacks wouldn’t even place you in the top 10.

Consider: A 20-pound bag would have put you in 20th position at the 2010 Bass Pro Shops Lake Simcoe Open, when the winning team of Mark Moran and Joey Muszynski hauled a mind-boggling five-fish limit to the scales weighing 31.55 pounds. That’s better than a six-pound average. In the same tournament, the biggest bass weighed a staggering 8.05-pounds. So, what’s going on?

Clearly, the climate is changing and our lakes, rivers and reservoirs are warming. That’s good news for smallmouth bass, says Peter Colby, retired head of the walleye research unit with Ontario’s Ministry of Natural Resources. “But you can say sayonara to trout, salmon, whitefish and ciscoes,” he quickly adds.

Renowned fisheries scientist John Casselman, who has studied the response of smallmouth populations to rising water temperatures in Ontario’s Bay of Quinte, puts it into perspective even more. He says a 1°C rise in water temperature provides a five-fold increase in smallmouth bass recruitment. A 3°C increase, on the other hand, offers an unbelievable 15-fold enhancement.

That said, giant smallmouth bass don’t just jump into your boat—you still have to find them. This starts by picking a lake, river or reservoir with a history of growing giant smallies. Such large systems enjoy wise management that protects the adults during the critical spring spawn. They also host excellent populations of thin-skinned, soft-rayed forage fish such as smelts, ciscoes and gobies.

Picking just one or two specific big-bass fisheries and learning them well, rather than sampling the full buffet, is another piece of the puzzle. Part of the reason is because the biggest bass in the lake—the true behemoths—are rarely found in and around the obvious structures and easy-to-locate community fishing holes. Instead, they tend to be found in isolated locations missed by the mapmakers. A prime example is a cluster of five or six boulders along an otherwise featureless contour line that suddenly breaks sharply into much deeper water.

The only way to find such places, of course, is to put in the time. That means leaving your fishing rods on the casting platform and slowly motoring around the lake, all the while scrutinizing your sonar. It should be set on split-screen format, relaying back down-scan, side-scan and traditional sonar data. Once you find a likely hot spot, the next step is to find out what the fish want.

“Fish ’em high, fish ’em low, fish ’em fast, fish ’em slow” is the motto my fishing buddies and I have lived by for years. It means you need to systematically cover the bases in terms of lure depth and speed control. Though it’s not crucial, having a partner in the boat will speed up the process. While one person slowly drags a tube jig, fishes a shaky-head worm or drop-shots near the bottom, the other walks a topwater lure across the surface or rips a suspending jerkbait through the middle of the water column. Before long, you’ll see a pattern emerge that’s bound to pay off handsomely in big bronze beauties.

So, where are the best places to catch a trophy smallmouth in Canada? Launch your boat at any of these hot spots and you’re in business.