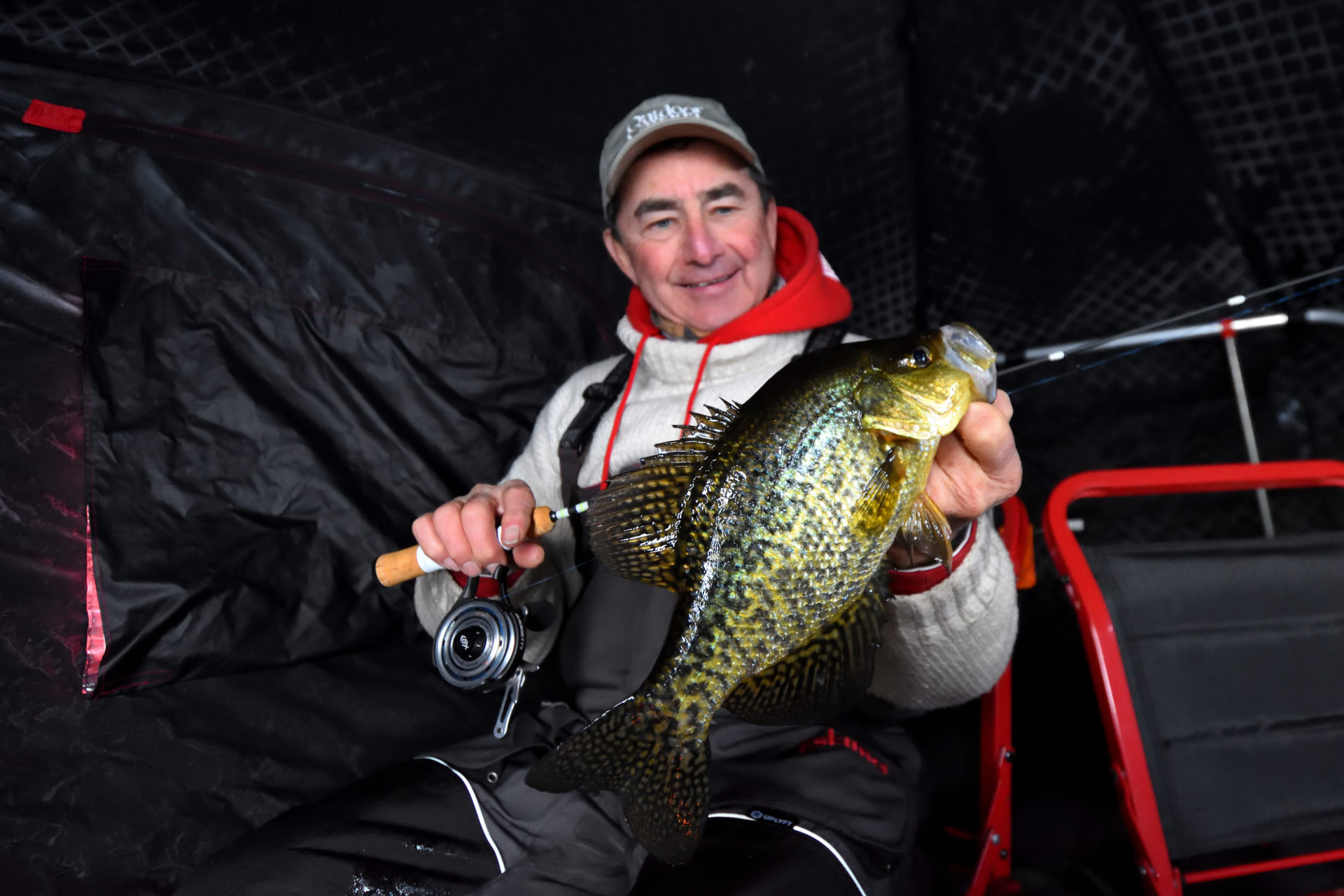 By preventing line spin, these reels will increase your hook-ups

I have probably increased my brook trout, yellow perch and black crappie success by as much as 25 to 30 per cent over the past few winters by making one strategic change—I’m now fishing almost exclusively for these species using single-action ice reels.

To the uninitiated, ice reels or “spoolers” as they are commonly called, look like fly reels and share many of the same characteristics. The most notable is that one turn of the handle generally winds in just one or two lengths of line. So, there’s little or no multiplier effect like you gain from using a spinning or baitcasting reel with a 6:1 or 7:1 gear ratio.  In those cases, one turn of the handle winds in six or seven lengths of line, making lure retrieval and fish fighting more efficient. So the low ratio reels can limit your ability in ways that I’ll talk about in a minute. But when you look more closely at spoolers such as 13 Fishing’s Black Betty and HT Enterprises’ Polar Deluxe Tightline reel, you start to appreciate the benefits they can offer.

The most important is that your monofilament, fluorocarbon and microdyneema line is wound onto the spool in a direct and straight fashion, so you’re not forcing it to twist and reshape itself like you do when filling a spinning reel. This means there’s little to no chance the line will coil and memorize the shape of the spool.

This may not sound like much, but it’s the biggest advantage I believe ice spoolers offer. The fact of the matter is that when line memory develops on a spinning reel and you drop down your bait or lure, it spins in circles. And for a fish, there’s no bigger fish turn-off than a bait or lure that’s spinning—especially when you think you’re holding it dead still.

Now, I know what you’re thinking. You’ll counter the line twist by tying a small swivel to the end of your main line, then connect a one-, two- or three-foot-ong leader. This helps, no question about it, but when you are using ultra-light two-, three- and four-pound-test lines, a swivel doesn’t eliminate spin entirely. And you’ve just added two knots or weak spots in your angel hair.

Another benefit of using an ice spooler is your ability to present your lures in ways that you can’t when you open the bail on a spinning reel and let the lure fall.  With ice spoolers you can control the fall rate, so when you hit the free-spool lever your bait or lure descends at a consistent rate, be that fast, slow or moderate.

A couple of winters ago, my grandson Liam and I got dialled into the bait-falling speed that the brook trout wanted, and every trout we caught rushed over and gobbled up our lures as they slowly floated to the bottom. It was one of our best trout trips ever, and it happened only because we were able to dial in and fine-tune the fall rate of our baits. 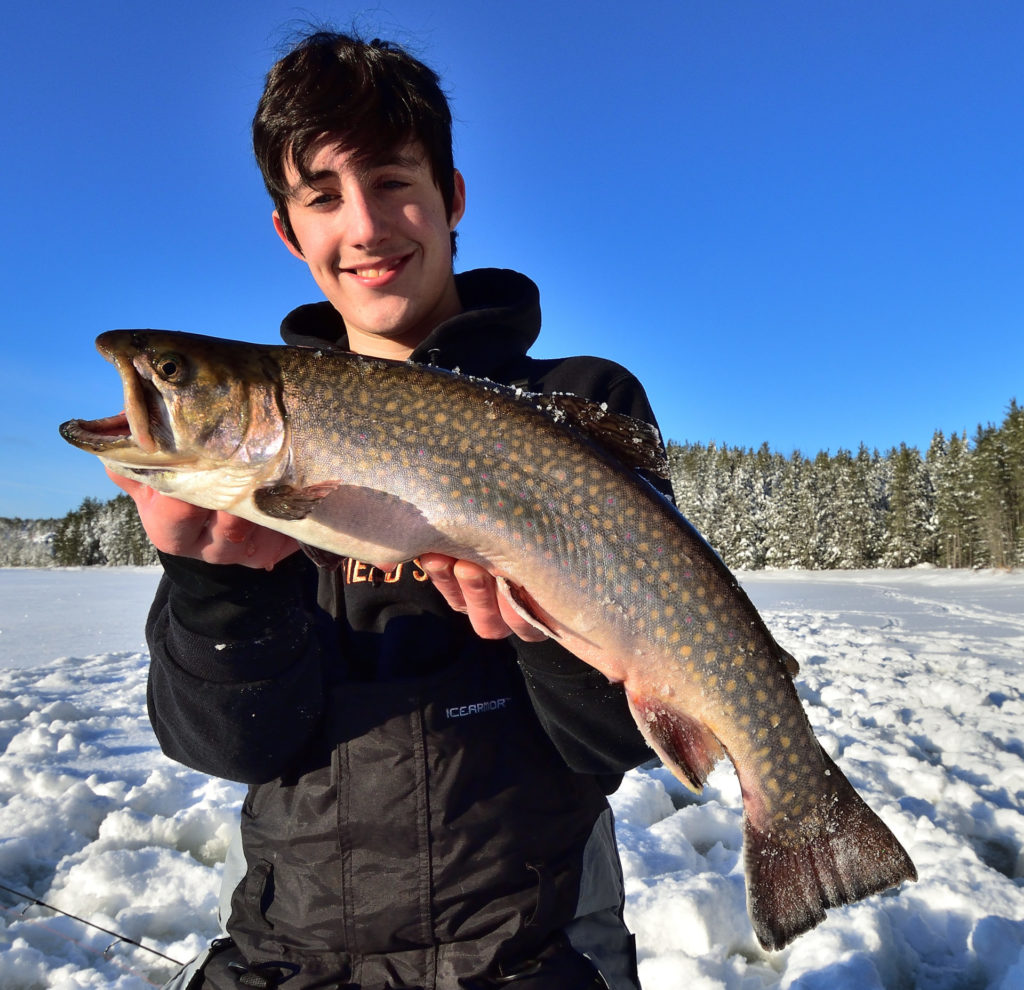 By now, you’re probably wondering if spoolers are so good, what are the drawbacks? Well, one is the low gear ratio I mentioned earlier. Truth is that you’ll never catch up with a double digit lake trout streaking up to the underside of the ice after you drive a hook into its mouth. The fish will throw slack into your line and get away. So, for the time being, at least, the reels perform best when you’re fishing for panfish, stocked trout and species such as walleye that don’t make blistering quick runs.

The other thing that will take some time getting used to is setting the spool tension properly.  Let me put that another way. Most of us are used to opening the bail on a spinning reel and letting the line tumble off.  Trust me, when you are first starting out with an ice spooler, you’re going to spot a fish on the sonar screen, hit the free spool lever and then manually strip out line so you can get your bait quickly down to the fish. But the bearings on good ice reels are so smooth, and rotate so effortlessly, that instead you’re going to create a bird’s nest that will make the neighbourhood ravens jealous.

I should mention, too, that you might think you can take a standard fly reel and make it perform double duty. That’s how I got into the game in the first place, before the true spoolers came along. But fly reels lack the elevated reel seats and don’t sit properly on most ice rods.  Plus, the arbours on most fly reels are inappropriately sized, and you can’t pencil grip them properly while ice fishing.

So the bottom line is simple: the new spoolers are good—very good—and if you spend even a moderate amount of time ice fishing, especially for panfish, you’re going want to take one out for test drive this winter.