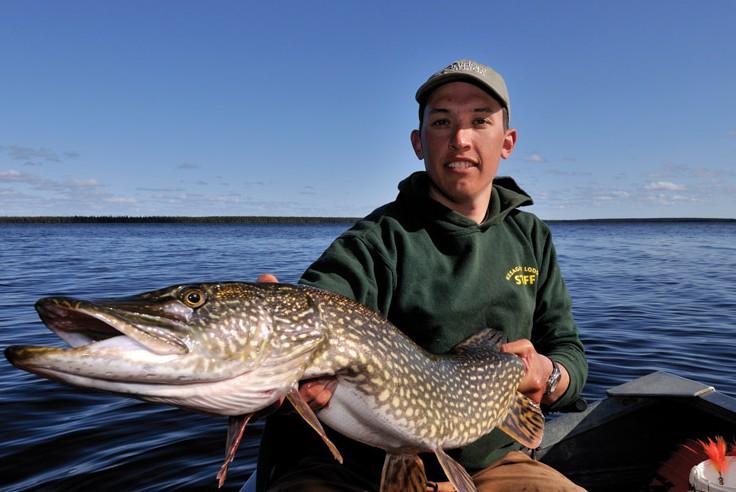 When ancient Roman philosopher Seneca proclaimed “Luck is what happens when preparation meets opportunity,” he may well have been talking about spring fishing for northern pike. For when it comes to catching numbers and sizes of northerns, there’s no better time to get lucky than spring. But as Seneca said, you have to be prepared—and that starts with locating the fish.

Fortunately, that’s an easy task, made easier yet by the fact the biggest pike in the lake are prowling very shallow water in the spring, having just spawned or about to begin the egg-laying process. Still, there’s a lot of shallow water in a lake, so how do you narrow your search even more?

The fastest way is by locating the outflows of various creeks, streams and rivers entering the lake, where the moving water creates rich, fertile deltas. The best such spots are usually the largest inflows, where huge quantities of detritus are deposited, fertilizing the flats and creating lush, weedy, Garden of Eden-like conditions.

Pike spawn successfully in these areas, where they can lay their sticky eggs on the submerged vegetation and flotsam, keeping them off the low-oxygenated bottom. The rich habitat also hosts swarms of aquatic life, providing plenty of feeding opportunities for the newly hatched fry, as well as for their mothers and fathers.

All the moving water associated with these spring freshets also attracts hordes of walleye, bass, perch, crappies, shiners and, most importantly, suckers. To the ravenous pike, fresh from spawning, it’s like sitting in front of one of those revolving trays of food at an all-you-can-eat sushi bar. Talk about preparation meeting opportunity.

As a result, pike fishing is usually so good in the spring that most anglers are left wondering how they can keep the hot bite going throughout the year. Some repeatedly return to the same rivermouths, shallow grass beds and deep weedlines where they struck it big in the spring. But unless they live in the Far North, the great fishing won’t last long. The water will eventually warm up and the pike will vanish, leaving the anglers frustrated and fishless.

But it isn’t that way for everyone. More and more savvy anglers are discovering they can follow the fantastic fishing throughout the open-water season by carefully tracking the 18 to 20°C band of water temperature that pike find ideal. “Northern pike act like heat-seeking missiles,” says famed fish researcher John Casselman. “They actively search for areas where the water temperature is optimal for growth.”

Amazingly, Casselman has found that pike will forsake almost everything, even food, in order to bask in water temperatures as close to optimal as they can find. To help illustrate this, he points to Lake Ontario’s Bay of Quinte. During spring, when water temperatures are ideal, anglers can catch pike throughout the massive bay, even in the upper reaches. But as the shallows warm and water temperatures exceed optimal growth levels, the pike vacate the bay, religiously following the narrow band of preferred water temperature.

“We see a lateral movement of the biggest fish down the bay,” says Casselman, noting that by the beginning of summer, you’ll always find the biggest pike in the lower bay or out in the eastern basin of Lake Ontario itself. “Climate, weather and thermal dynamics are the driving factors.”

Translation? Find that magical band of 18 to 20°C water, and you’ll find the biggest pike. But that means being prepared to look for it. As for actually catching the fish, that all depends on you and, of course, a bit of luck.

Once you find northern pike in the shallows during the spring, catching them is easy. For starters, it’s hard to beat bulging an in-line spinner, such as the Mepps Black Fury Musky Killer (pictured), #5 Mepps Aglia or Blue Fox Vibrax Musky Buck. Ditto to ripping a hard jerkbait such as the Rapala Husky Jerk, LiveTarget Smelt or Lucky Craft Pointer Minnow. As for soft-plastic jerkbaits, the Castaic Jerky J, Berkley Hollow Body Swimbait and Zoom Fluke are three of my favourites. And when the giant pike are cruising deep weedlines, drifting a quick-strike-rigged dead bait under a float is just the ticket.