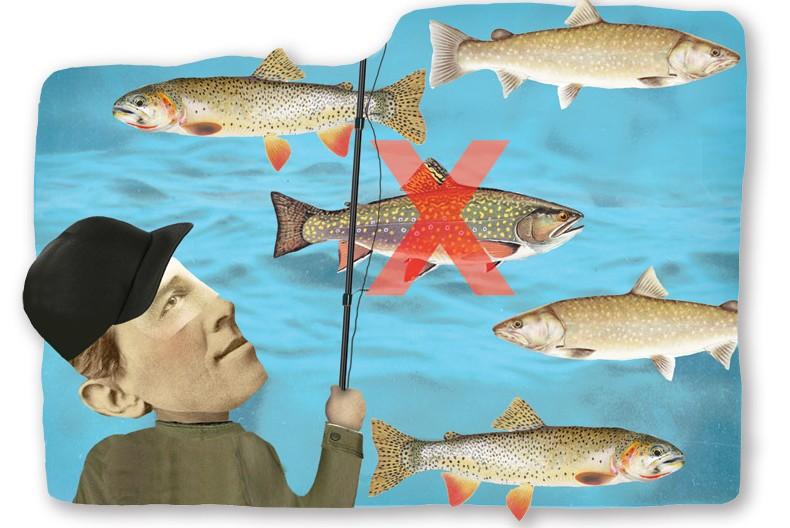 Why we should kill some of Alberta’s brook trout

Catch-and-release has become a sacred mantra for many anglers, with the prospect of killing any fish, especially a wild trout, bordering on sacrilege. In Alberta, however, that attitude is being challenged by a small group of anglers intent on doing their part to bring back declining populations of native bull and westslope cutthroat trout.

How so? They’re killing every brook trout, an introduced species, they catch in selected waters—complete with the blessing of the Alberta government and Trout Unlimited Canada, the country’s top cold-water fisheries conservation group. And I am one of them.

Yes, it’s true. My name is Bruce, and I am a brookie bonker.

I hold a special stewardship licence—a licence to kill, if you will—issued by the Alberta Fish and Wildlife Division under a pilot project to reduce brook trout populations in certain southwestern Alberta streams. My involvement dates back to 1998, when the government and TUC teamed up to launch the Brook Trout Suppression Project in Quirk Creek, a tiny tributary of the Elbow River just 50 kilometres southwest of Calgary.

In the mid-1900s, myopic fisheries managers began extensively stocking brook trout in many Alberta waters, with Quirk Creek becoming a symbol of the program’s devastating impact on native species—by 1978, brookies made up 23 per cent of the stream’s fish population. That jumped to 92 per cent by 1995, putting the native cutts and bulls, Alberta’s provincial fish, on the ropes.

Some anglers might ask “So what? A trout is a trout, right?”

For starters, bull and cutthroat trout are considered more desirable sportfish in Alberta. They’re easier to catch, and they grow larger when not competing against non-native species for food. Then there’s the very essence of what fishing for wild native trout represents, perhaps best summed up by U.S. fly-fishing writer Ted Williams. “When a person fishes in degraded habitat for fish that don’t belong, fly fishing is mere sport—like bowling,” Williams once wrote. “When a person pursues wild, native fish in pristine habitat, fly fishing becomes more meaningful, and the fly-fisher is elevated to a participant in nature instead of being just a taker.”

So, when forward-thinking Alberta fisheries biologist Jim Stelfox initiated the Quirk Creek project in 1998, I was keen to participate in one of the first outings. But I first had to pass a mandatory trout identification test; sadly, many anglers in Alberta can’t tell the difference between among brookies, bulls and cutthroats, which is why the province can’t just declare open season on the introduced trout.

That first day on Quirk Creek, I landed more than a dozen brookies. All were killed, even those of only a few inches, and my family ate them all. I’ve since participated in the program several more times.

A decade after the project began, the number of brook trout had dropped from 92 per cent to 30 per cent of the total fish population. To date, authorized anglers have harvested more than 9,500 of Quirk’s brookies. Encouraged by such results, the province expanded the program to several other streams under the special stewardship licence.

Last August, I joined Stelfox and two other permit-holding fly-fishers on a trip to one of those streams. We caught 99 fish that day: 90 were brook trout, which we killed, and the rest were cutts, which we live-released back into their home waters.

My fishing partner that day was Kevin Van Tighem, a lifelong conservationist and fellow Outdoor Canada field editor. Recently retired from a career with Parks Canada, he has been alarmed about the proliferation of brookies since he began fishing Eastern Slopes waters as a boy growing up in Calgary.

An unabashed supporter of the eradication program, Van Tighem also believes it’s up to anglers to help restore native trout species whose survival is at risk because of past mistakes in fisheries management. “I prefer not to take part in catch-and-release-only fisheries if there is a chance to be part of a more ecological kind of fishing,” he says. “And brook trout taste good.”