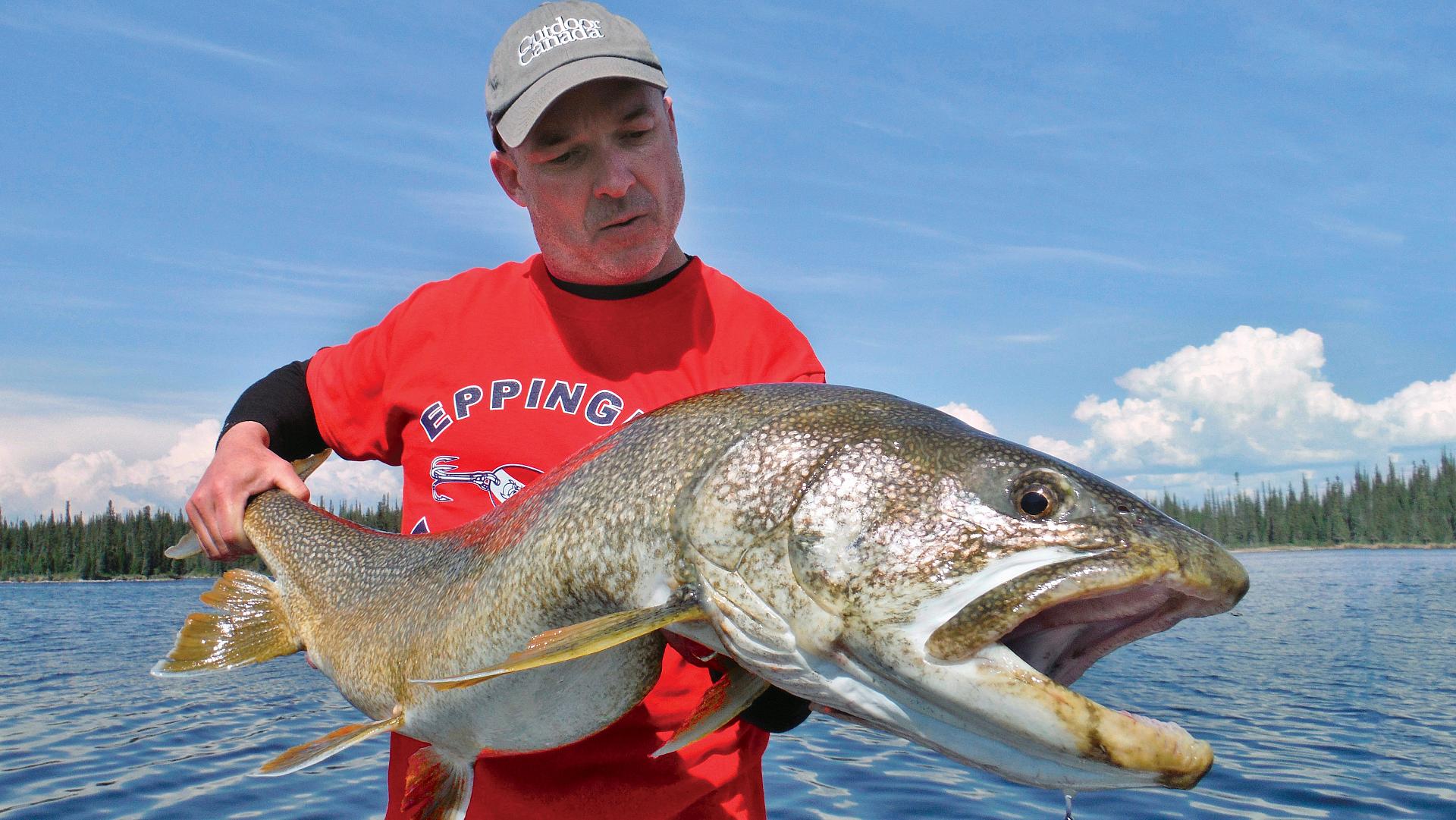 On the N.W.T.’s third largest lake, don’t be surprised if you hook into more than you bargained for

It certainly wasn’t the result I was hoping for, let alone expecting, when I made my first cast on my first day on the N.W.T.’s Lac La Martre last June. Now, before I go any further, a few words in my defence. First, I was admittedly overexcited to finally be out on the water, having travelled the previous day from Toronto to Yellowknife, then completing the final hour-long leg that morning aboard a float-equipped Cessna 208 Caravan.

I was also eager to get cracking on trying to best a couple of catch-and-release world records in the National Fresh Water Fishing Hall of Fame’s fly fishing division. The N.W.T.’s third-largest lake, La Martre may be dwarfed by its two bigger brothers, Great Bear and Great Slave, but it’s nonetheless renowned for serving up gargantuan northern pike. The odds were particularly good because it was early in the month, not long after ice-out, and the post-spawn fish were still cruising the shallows.

Joining me on this quest was my friend John Cleveland, marketing manager of Eppinger Manufacturing, the Dearborn, Michigan-based makers of the famed Dardevle line of fishing spoons. And at the helm of our 18-foot Alumarine was Zack Brown, a Fort McMurray-raised outdoorsman who was in his fifth season of guiding with Lac La Martre Adventures.

And finally, rounding out my defence, I had to contend with the wind—40-kilometre gusts, to be precise. As we entered the first promising-looking bay, in fact, the stiff breeze pushed the boat too quickly toward the shoreline, no doubt spooking any pike that may have been lurking in the shallow weeds. It was only once Zack got us back out and in position to fire a few flies to a fresh spot that I could unfurl that fateful first cast.

Standing on the bow deck, I was just at the tail end of my backcast when the line suddenly went taut and Zack, who I’d known for all of an hour at that point, abruptly yelled, “Whoa!”

It wasn’t so much a cry of pain as it was an urgent plea for me to stop my cast, and when I turned around to investigate, I could see why: A gust of wind had grabbed my voluminous Clouser Minnow and neatly delivered it to Zack just as I was beginning my forward cast, embedding the hook deep into his right thumb.

I had caught my guide.

Of course, I was mortified and apologized profusely. Who is this clown? I imagined my 23-year-old guide thinking. I have to share a boat with him for four days? But Zack said nothing, and went to work removing the hook. Thankfully, per the lodge’s rules, the fly was barbless and he quickly yanked it from his flesh with a sharp tug on his pliers.

Lesson learned. I promptly adjusted my position to avoid a repeat performance, and Zack fired up the 50-horse Honda outboard and pointed us toward a more sheltered bay.

Redemption wasn’t long in coming, and by the time we headed off the water at 10:30 p.m., after eight and a half hours of fishing, John and I had connected with several monsters. My two biggest northerns—stretching the tape to 44 and 44½ inches, respectively—had fallen victim to the Murdich Minnows that John had supplied me with. It was a great first outing, Zack’s punctured thumb notwithstanding, and while no records were broken, it was a positive sign of the angling action yet to come.

For John and me, the objective of catching record-breaking pike on Lac La Martre served more to add a fun, competitive element to our adventure—it wasn’t imperative that we actually topple any records. In truth, all we really wanted to do was catch-and-release big fish, and lots of them, preferably by sight-fishing in the shallows.

In 2012, John and I had ventured to the northern Saskatchewan end of Lake Athabasca on a similar mission, that time targeting lake trout records with our 9-weight set-ups. We were successful, too: I broke the records for 15- and 17-pound tippet, while John reset the bar for eight-, 12- and 14-pound tippet. Again, though, it was the non-stop bite that was the real draw. In all, we caught and released more than 200 lakers, including no fewer than 71 double-headers. The records were just pure bonus.

We had so much fun on Athabasca that we decided Lac La Martre Adventures was the perfect place for a repeat performance. John had fished there in 2014 with his son, and knew the potential—he broke the 17-pound tippet record for northern pike with a 46-inch beast. His guide at the time? Zack. Confidence was therefore high that we’d find similar good fortune.

Fishing pressure certainly wasn’t going to be an issue—Lac La Martre Adventures is the sole lodge on the 1,687-square-kilometre lake. And over the entire season, which runs from mid-June to early September, the lodge hosts only 100 or so anglers. That’s a number that co-owners Greg Dussome and Dave Thompson purposely rein in to keep the pressure down on the big pike. “We don’t want to risk it,” Dave explained, noting that the promise of giant northerns is a prime draw (see “Lodge allure” below).

Plus, the lodge hadn’t even officially opened yet. The only other anglers in camp were Americans Scott Montross and Bill Levendosky from Vancouver, Washington. They’ve been coming to Lac La Martre every summer since 2008, after first hearing about the place while fishing at Lake Athabasca. “Someone said this is the best northern pike fishing he’d ever seen, bar none,” Montross said. “It was a word-of-mouth kind of thing. That’s what started it off.” His first year at the lodge, he caught a 30½-pound northern.

A testament to how many big fish are caught and released at Lac La Martre, including lake trout, is the lodge leaderboard. The rankings from the previous season were still up when we arrived, revealing that 44 anglers had joined the lodge’s 20-20 Club in 2014, earning their membership by catching at least one 20-pound or heavier northern and one laker topping 20 pounds. In case you were wondering, the guides weigh the fish by keeping them in the net, then subtracting the weight of the net from the total. Zack pulled double duty for us, also measuring our fish per the Fresh Water Fishing Hall of Fame requirements.

Rounding out the day, we explored several other bays and inlets along the north shore, having the most fun sight-fishing with topwater mouse flies, and racking up even more 40-inch-plus fish. For my money, it’s tough to top the excitement of watching a monster northern flare its gills and absolutely smash your surface fly as you strip it in. And things get even crazier when more than one of these wild fish come storming in for the kill.

It was just past 9 p.m. when we finally returned to the lodge on Clemy Island, having been out on the water since eight that morning. It’s amazing how quickly 11 hours can whiz by when you’re having an absolute blast and the fishing is just that good. And we weren’t the only ones enjoying the action—a glance at the leaderboard revealed that fellow guests Scott and Bill had also earned their membership in the vaunted 20-20 Club.

In the end, I never did break a record, but I certainly got my fill of catching no end of combative northerns on the fly. On our fourth and last day of fishing, I decided to keep a tally: in the first bay alone, I picked up 21, fish while John landed another 28. After that, there were just too many catches to keep track of, so I only made note of our double-headers—12 in total—before it was finally time to say goodbye to Lac La Martre.

And in case you were wondering, no, I didn’t stick Zack again.

Editor-in-chief Patrick Walsh is always up for an angling challenge—and adventure.

When they purchased the sole fishing lodge on Lac La Martre in 2010, Greg Dussome and Dave Thompson knew exactly what they were getting into. Hailing from Robb, Alberta, Greg had already been guiding at the lodge for five years, about the same amount of time Dave had been venturing north from his home in Fort Gratiot, Michigan, as an angling guest. On his first visit, in fact, Dave had Greg as his guide. The pair hit it off, and when the lodge failed to open in 2009, they saw an opportunity.

“We knew how good of a fishery it was,” says Dave, 57, a semi-retired business investor. “Our first goal was to come back the next summer and fish.”

Greg, who also runs High Ridge Outfitters in his home province, agrees: “The overriding thing was the fishery.”

With that, the pair visited the place in March 2010 when there was still snow on the ground, and by the end of April, they were the new owners in partnership with the local First Nations-run Tlicho Investment Corporation, which holds a 40 per cent stake. That first season, they had just 17 guests; this year they expect more than 100.

To date, the pair has made $200,000 in improvements, including new boats and motors, a new camp generator and new walkways. Plus, all the cabins now have propane heaters, as well as their own toilets, sinks and showers—decided niceties for a northern fishing camp. “We just started growing it every year,” says Dave, noting that the operation began turning a profit two years ago. “It’s been fun. It’s been a ball.”