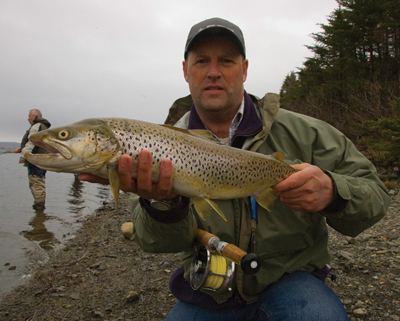 Hottest spot: The mid-river island above the first rapids

Best for numbers of Arctic grayling

No word of a lie: In the span of less than a half-hour, I watched fly fisherman John Horsey pull 50 Arctic grayling from one small pool on the Yukon’s Wolf River. Of course, Horsey had a bit of an angling advantage, being the captain of England’s 2009 World Fly Fishing Championship team. That said, you certainly don’t need to be a pro to fish like a pro on the Wolf. Just ask me. During my visit in June 2009, I caught so many grayling on dries and nymphs that I honestly lost track of the exact tally, but it was definitely in the hundreds—all catch-and-release, of course, except for the few I kept for shorelunch. How crazy was the catching? Picture aggressive grayling nipping at my dangling fly as I try to work out a wind knot: three times I caught fish doing just that. In other words, the fishing is so good, you can catch fish without even trying. Just amazing. But not surprising, really.

These are wilderness fish, after all, unaccustomed to angler pressure and, as a result, completely willing to take almost any offering. And the volume of aggressive fish is simply incredible, complete with the chance to land four-pound lunkers. So explains the high praise from visitors such as John Wilson, British TV’s Mr. Angling. His effusive description of the Wolf? “Grayling heaven.”

Why we chose it in 2010: Arctic grayling; World-class grayling action

When to fish: July to September is prime.

Where to fish: Move from pool to pool between Wolf Lake and the first set of rapids.

Tip: Practically any small dry fly or nymph will do the trick on these wild fish, a will any small in-line spinner.