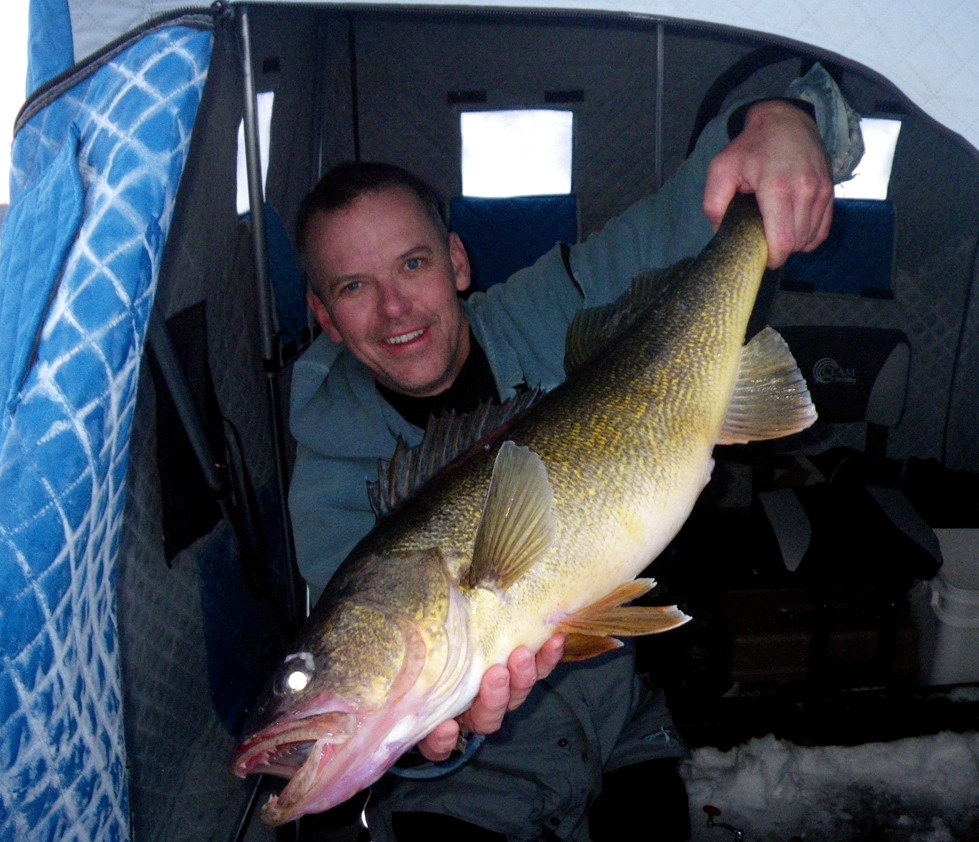 Is there an angler anywhere, who hasn’t wondered what it would be like to catch a world record fish?  I know the thought has crossed my mind more than once.

Indeed, the last year the Molson Big Fish Contest, a hugely popular, season-long, fishing contest was held in Ontario, I caught the biggest muskie and won the first place prize in the Catch and Release division.

A few years later, I landed an even bigger fish, on almost the same late November day, on the very same structure.  I quickly measured and released the behemoth, thinking it was my prize winner from a few years back that had grown even bigger.  Based on the length and girth measurements, it weighed 57.5 pounds, only 8-pounds, or a big muskie meal shy of a new world record.

So, you can imagine the thoughts that were running through my mind every time I subsequently visited that late fall honey-hole.

I even pre-planned how, if I caught a world record behemoth, I would pull the drain plug inside the boat and flood it half-full with water so the muskie could swim comfortably inside, while I slowly motored back to Kenora and weighed the monster on a certified scales at the local Safeway Store that is fortuitously situated smack dab on the shore of Lake of the Woods and even has boat dock access.  It was my dream, you see, not only to catch the next world record muskie, but also to be the first person ever to let it swim free.

Alas, my pre-planning – at least to date – has been wasted.  Not that I haven’t been involved in a world record catch.

Just last winter I was wrapping up a fishing seminar, up on the Hawg Trough at Andy Pallotta’s Spring Fishing and Boat Show in Toronto, and was heading back to the Outdoor Canada Magazine booth.  A young fellow was waiting for me at the bottom of the stairs, however, and from the smile on his face, it was obvious he wanted to share a tall tale about a particularly big fish.

Turns out the angler is Jay Miller from Milton, Ontario and he was fishing with a bunch of buddies, on an annual ice fishing excursion on Lake Temagami, in Northeastern Ontario. 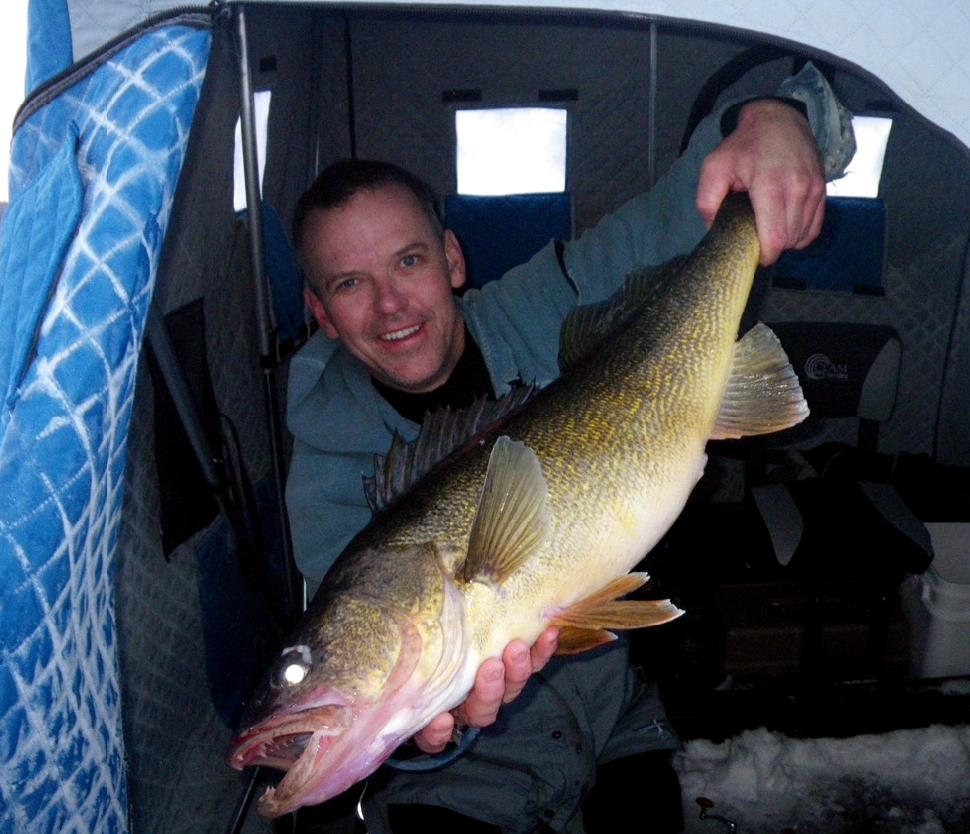 Jay was excited for two reasons.  First, he had caught and released a gorgeous 34-inch plus long walleye, his personal biggest ‘eye ever.  And second, it is a long standing tradition amongst the buddies that whoever lands the biggest fish, gets the following year’s trip paid for the rest of the group.

“Boy did I party that last night,” Jay chuckled.

Unfortunately, Jay didn’t have any photos to show me, or maybe he had a shot of the fish on his cell phone but it was too small to see, I honestly can’t remember now.  I do know that I gave him my e-mail address and asked him to e-mail me a photo.

It was waiting for me when I arrived home a few days later, where upon taking a close look at it, I thought, whoa, that is a mighty big walleye.  Especially, for the winter time.

So, I flipped it on to a good friend of mine, Jeff Matity, who has a biology background, is the top walleye guide in Saskatchewan and has single handedly caught more monster ‘eyes through a hole in the ice than any other six anglers I know.  (If you’re ever heading out to Saskatchewan to fish, give him a shout  at momknowsfishing@sasktel.net )

Jeff, took one look at Jay’s fish, along with the measurements and quickly did a few mental calculations.  Within minutes I heard the “ding” on my computer screen telling me “you’ve got mail” and when I saw it was from Jeff I opened it up.

“Tell your buddy he should pursue that big walleye with the record keeping folks,” Jeff responded.  Which, I am proud to say, is precisely what I did.

And, Jay, to his credit, took our advice.

After filling out a mountain of paperwork and waiting for what must have seemed like an eternity, he received word back from the National Fresh Water Fishing Hall of Fame folks in the States that his mammoth walleye had been officially recognized as the new World Record Walleye in the Catch and Release Ice Fishing division. 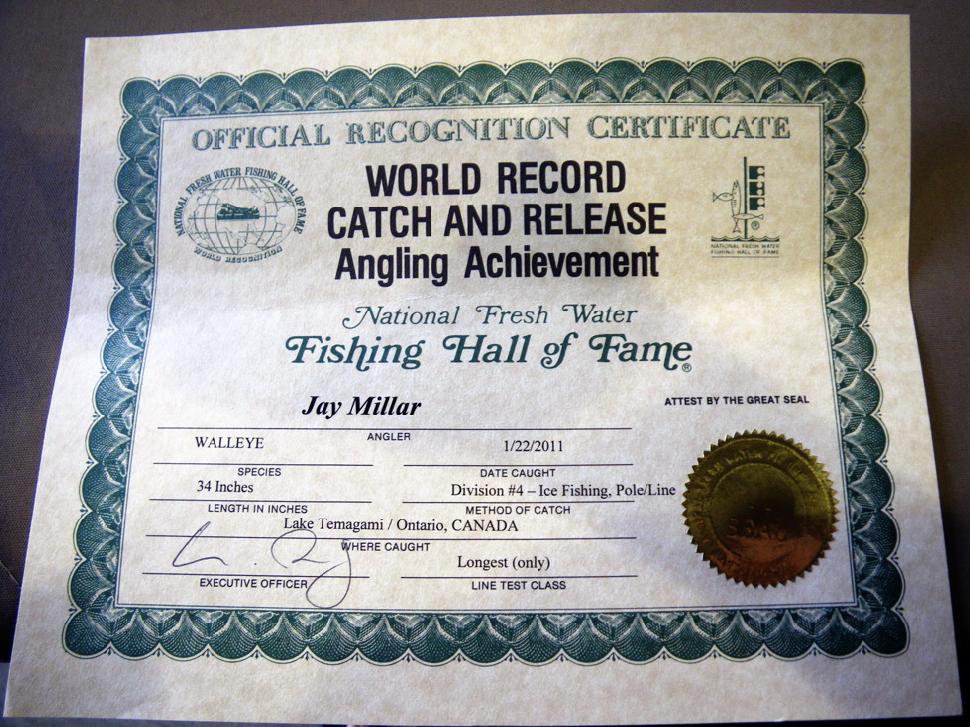 Now, I don’t know Jay very well, but I like to think I am a pretty good judge of character, and from what I can tell, he is a good guy.  The fact he released the biggest walleye of his life … “I could tell it was a female full of eggs” … so she could swim free tells me he can share a boat with me any day.

That, and the fact he let me share, in a very small way, in his world record catch.