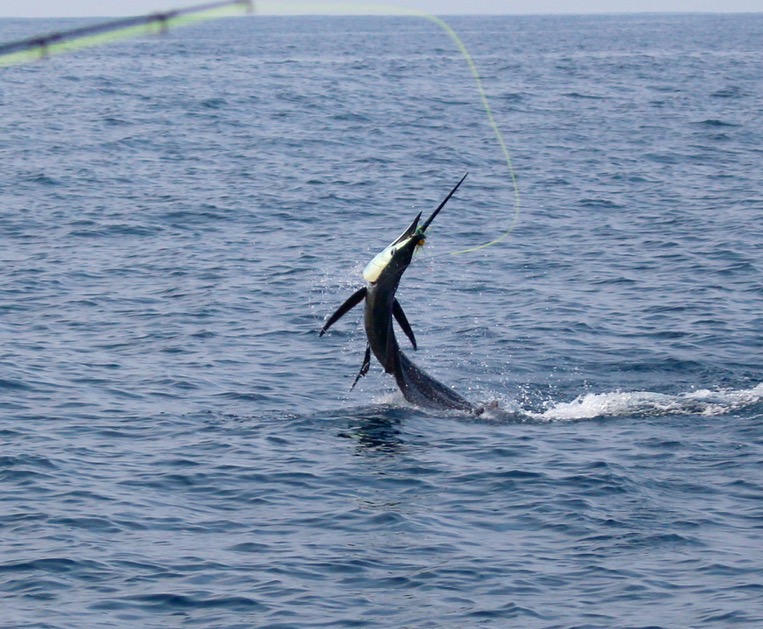 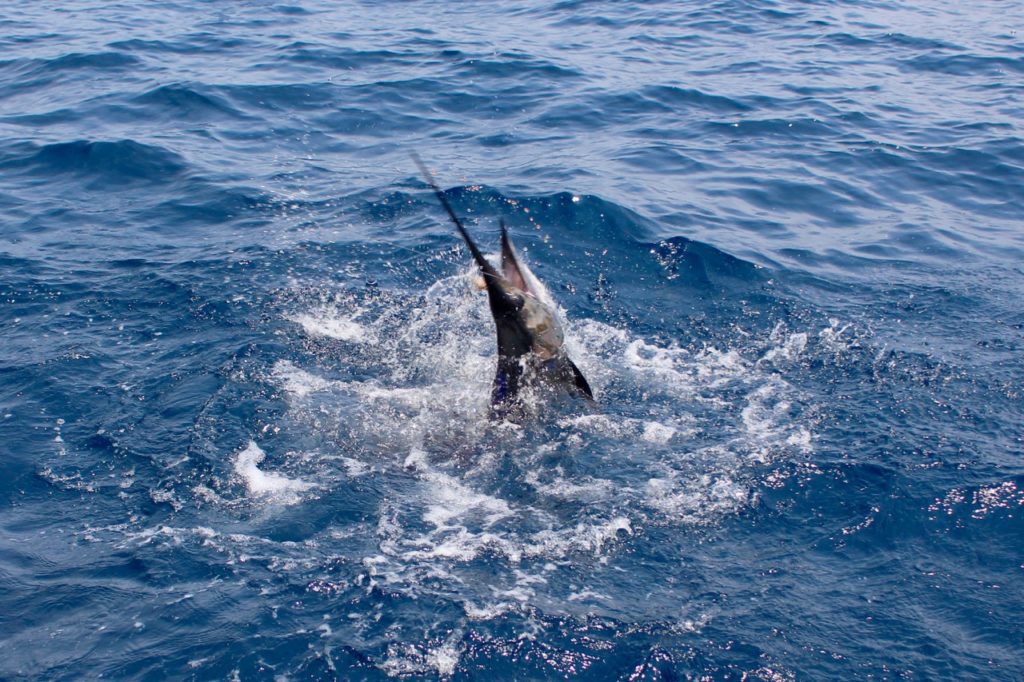 Some 20 kilometres off Iztapa in the Pacific Ocean lies “The Pocket,” a canyon plunging to depths of 4,000 feet. It creates strong currents that concentrate baitfish, drawing in big ocean predators. The most popular and effective way to catch these giants is by trolling a spread of foot-long natural and artificial baits using saltwater boat tackle—short, stout rods and turnip-sized level-wind reels. With the boat cruising at 10 to 15 kilometres per hour, the baits skim across the surface 40 to 100 feet behind the stern. The commotion mimics a school of baitfish, which attracts—or “raises”—excited predators.

Boats in the region post an incredible year-round average of 15 to 20 sailfish bites per day. And during peak season, from October through June, 40 bites a day is not uncommon. Mixed in with the sailfish are dorado ranging from five to 40 pounds and, at certain times, yellowfin tuna and mighty blue marlin of several hundred pounds.

There are so many sailfish at The Pocket that casting for them with fly tackle is both feasible and increasingly popular. Fishing that way usually means hooking and landing fewer fish, but we fly anglers will often strike that bargain. Still, sealing the deal requires teamwork, preparation, a decent casting ability and some fish-fighting skill. You also need a generous helping of luck and a high tolerance for frustration.

Extraordinary predators, sailfish hunt by racing up behind schools of prey and slashing with their long bills, then gobbling up the injured baitfish. Fly fishing begins by trolling the same spread of baits that conventional anglers use, but without hooks. These are teaser baits, intended only to draw fish into casting range. Once the teasers are deployed, you rig up your rod and wait and watch.

The mates will likely see the fish first, crying “Vela! Vela! Vela!”—Spanish for “sail”—as they race to their stations. Meanwhile, you pick up your fly rod and wait for your moment. By now, you can also see the fish, its sail raised as it slices at the farthest baits. Working together, the mates begin reeling the teasers away from the fish, drawing it ever closer to the boat. If you’re lucky, the sailfish is “hot” and “comes up the spread” following its prey, which keeps darting just out of range. Nerves jangling, you watch as the sail comes closer and closer. Maybe a minute has passed, two at the most. Then the captain, up in the fly bridge, shouts, “Get ready! Get ready!”

Just as the final teaser is pulled away, the skipper takes the boat out of gear and shouts, “Fly in de water!” But it’s no ordinary cast. You’re using a 12-, a 13- or even a 15-weight fly rod loaded with an ultra-heavy, 600-grain line. You need that power to quickly deliver your 10-inch popper fly, which has the disagreeable aerodynamic characteristics of an empty cola bottle. All the while, the boat continues to glide forward, pitching and rolling, and the boat’s tall bridge is right in line with where your backcast should go. Also, it’s windy. And you get just one shot.

Hopefully the fish stays hot—teased into a frenzy of hunger or bloodlust or whatever combination of excitements drives them to strike. Because of that sword-like upper jaw, a billfish eats by turning its head, so you need to drop the fly right by its mouth. Cast too short, and the fish will slash, but not strike; cast too far, and the fast-moving predator won’t see the fly. But once the fish commits, you sweep the rod horizontally, tightening up any slack and sinking the 6/0 hook into the bony jaw. Now it’s no longer a team effort. It’s all on you.