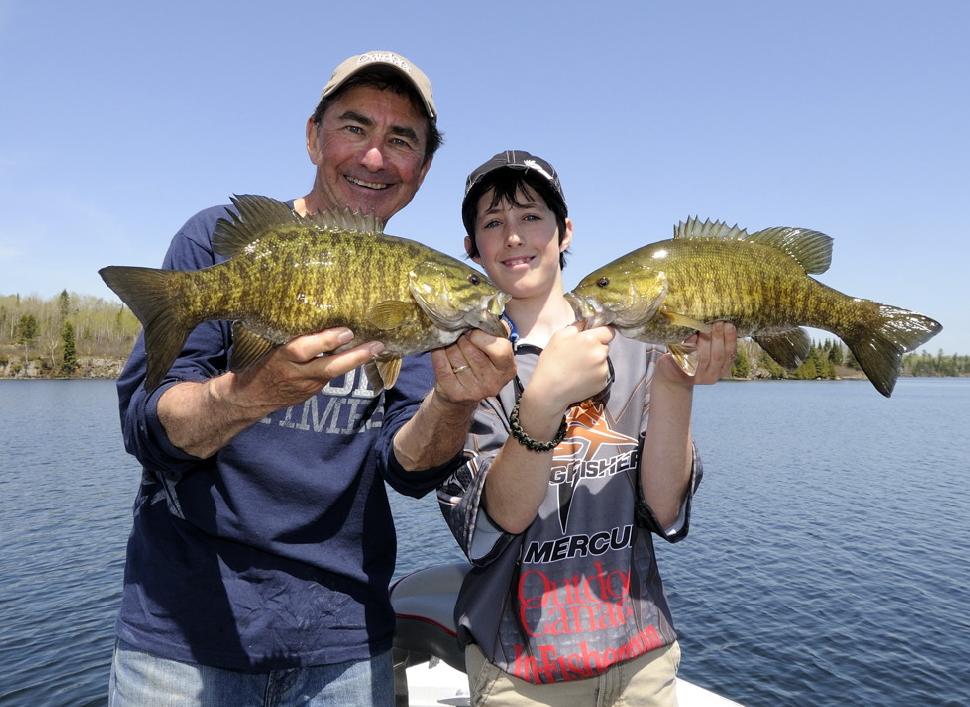 As buddy Bob Izumi is fond of saying, “you’re never done learning”.  And it was never more apparent than over the past weekend, as I got onto an early spring walleye pattern with my 11-year old grandson, Liam, that was simply “over the top”.

To be totally truthful, we stumbled on the tactic, but as I’ve said to several folks who marvelled at the fish we caught, I’d rather be “lucky” than “good”, any day.

As a matter of fact, Liam and I weren’t even fishing for walleyes at the time.  Instead, we were enjoying Northwestern Ontario’s early season catch-and-release bass fishing. But as the Kingfisher drifted shallow, over nine or 10-feet of water, Liam said, “There is a big fish, grandpa.”

I turned around fully expecting to see his rod bowed over and him fighting another big bass, but instead he was looking over the side of the boat, pointing to a dark shape silhouetted on the bottom. When I focussed in on the object, it looked like a dark break in the granite bedrock, but when I flicked my jig into the water, the “shape” suddenly scooted over to intercept my lure.

I set the hook and moments later Liam netted a beautiful fat five pound walleye that we quickly released.

As I eased the boat even shallower and slowly picked our way along the mixed sand, rock, boulder shoreline, it was clear there was a huge school of big walleyes spread out randomly in front of us.

Now, I might have been born at night, but it wasn’t last night!

As a result, we quickly cut off our bass lures and tied on 1/4-ounce chartreuse and orange coloured ReelBait Flasher Jigs – the ones adorned with the tiny willowleaf spinner below the hook.

I tipped the jigs with 3 1/2-inch chartreuse/orange Trigger X paddletail minnows and from that point on it was lights out for the rest of the day.

I kid you not, we could pull into any wind-protected back bay on the lake, and so long as we shut off the big motor long before we entered the secluded cove, and worked our way quietly, relying on our bow mounted MinnKota Terrova electric motor set at about 20-percent speed, we could spot bunches of big walleyes feeding in shallow water in front of the boat.

It was like fly fishing for bonefish on the flats in the Caribbean. 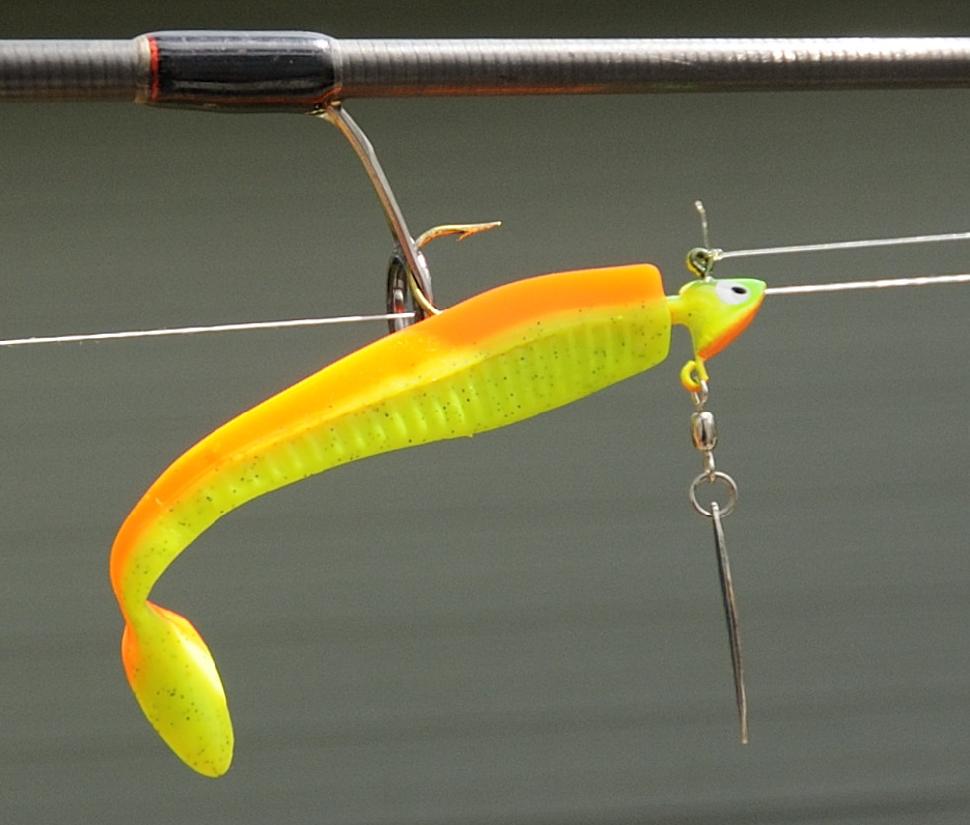 It was so easy, in fact, that we began to size up the fish first, deciding which ones were the biggest and then pitching our jigs three or four feet in front of the targets. Not surprisingly, if you dropped the lure on top of the walleye, it would typically shy away from the bait.  But if you lead it just enough, so it could see the colourful jig fall in front of it, it would turn on the after burners and wallop it.

Better still, several times we spotted big shadows cruising in front of the boat, made a long cast and watched the fish rush over and grab our jig only to set the hook and have a stout smallmouth come up and wallow on the surface.  It was clear that whatever the walleyes were doing in the tepid, waist-deep, back water, the smallmouth were doing it with them.

You might wonder, too, why I chose a chartreuse/orange coloured jig and Trigger X trailer.  It was because when we started the day casting for bass, we were enticing hordes of small, 2-, 3- and 4-inch long yellow perch.  So many perch were following our lures, in fact, that several times Liam dropped his rod, picked up the net and tried (unsuccessfully) to scoop them up as they nipped the end of my lure.

I suspect the walleyes and bass were binge feeding on the tasty bite-size perch. At the same time, perch are notorious egg stealers, so their presence was a tip-off that we were likely fishing around where the walleyes had just finished spawning, and they were now extracting their revenge on the pesky perch.

Same thing with the smallmouth. While the bass won’t bed for several weeks, there is no question that the smallmouth know that the perch will be soon be annoying them, raiding their nests, so they’re eating them now.

I mentioned the unique pattern to a couple of friends, specifically Canadian walleye pro, John Butts and Doug Stange, and they tell me they’ve witnessed it as well. Matter of fact, John came across it while fishing a PWT tournament on Arkansas’ Bull Shoals reservoir of all places. 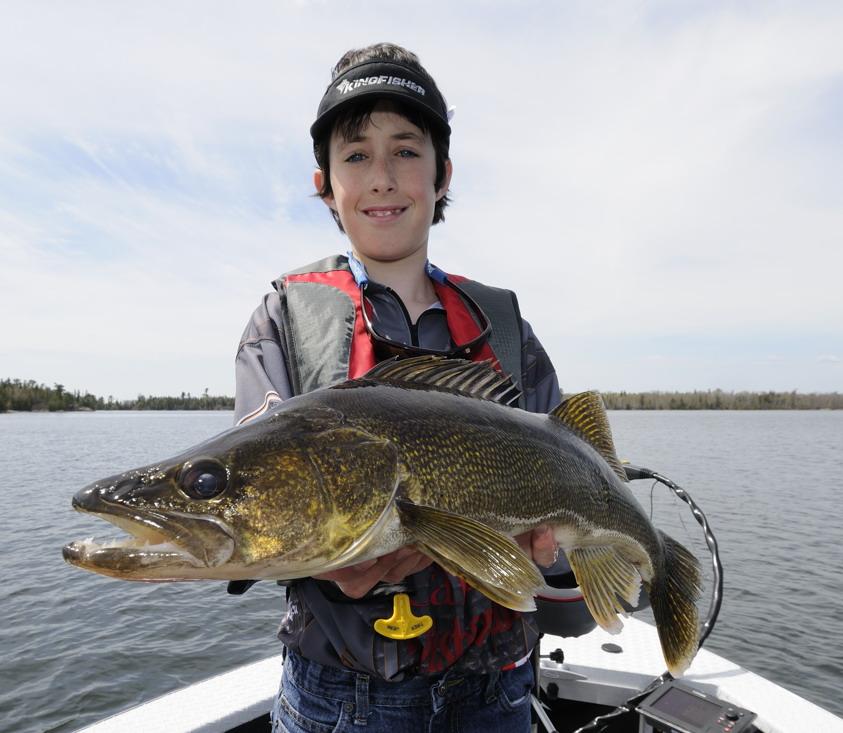 I am sure there is more to the pattern than what Liam and I discovered on the weekend, and more details that you can play with and refine to make it even more productive. Still, Liam lost track of the number of fish we had caught by 11:00 o’clock in the morning. When we finally put the Kingfisher to bed on the trailer in the early evening, we reckon we had released over 40 walleyes and 30 smallmouth. The ‘eyes easily averaged between three and four pounds, with several double that size. The majority of the bass were between three and four pounds as well.

Which means this is an early season walleye tactic you need to add to your spring time bag of tricks.