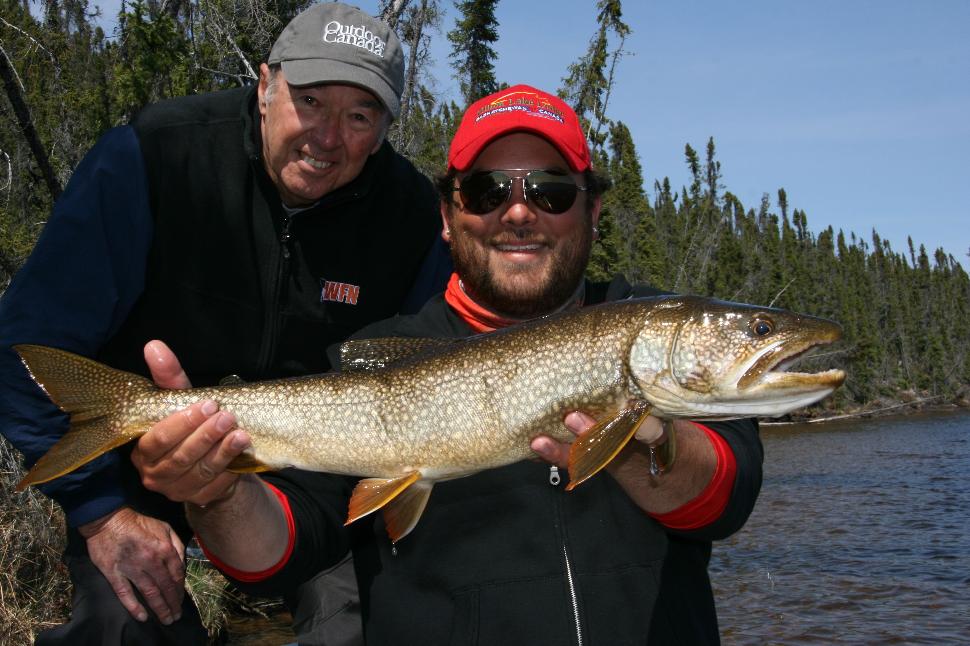 I’m all for fishing blind, casting into the unknown, tossing up against likely looking surface structure (weeds, boulder tops, stumps and so on) when I can’t otherwise see below the surface thanks to overcast skies. But when the sun is lighting up the world below the skinny water where spring pike dwell, nothing beats the chance to sight-fish to giant, scaly logs basking under the midday rays. And so it went for much of this afternoon.

While we have yet to catch our 40-plus-inchers (although two were on the line and a few more were spotted), we at least racked up the numbers, pulling in some 50 fish. Among them? This one lake trout, that Dad caught, patrolling the river channel at the north end of the lake, an area we would have thought to be the soul domain of pike (see photo).

And that’s not the only way the fish have been acting oddly, at least according to the collective experience of both guides and guests familiar with the lake since Milton Lake Lodge first opened back in 2005. Namely, the trout are swimming in pike habitat, and feeding aggressively, while the lake’s larger, 40-inch-plus northerns are few and far between. It’s to the point now that the guides are wondering where the big pike all are and, more importantly, when they’re going to make an appearance.

Again, though, no mind. While it would certainly be nice to put Dad behind a giant northern or lunker laker, we’re at least catching lots of fish, and having lots of laughs with our guide, my buddy Naoto Aoki, in the process.

Better yet, we still have two full days of fishing ahead of us.