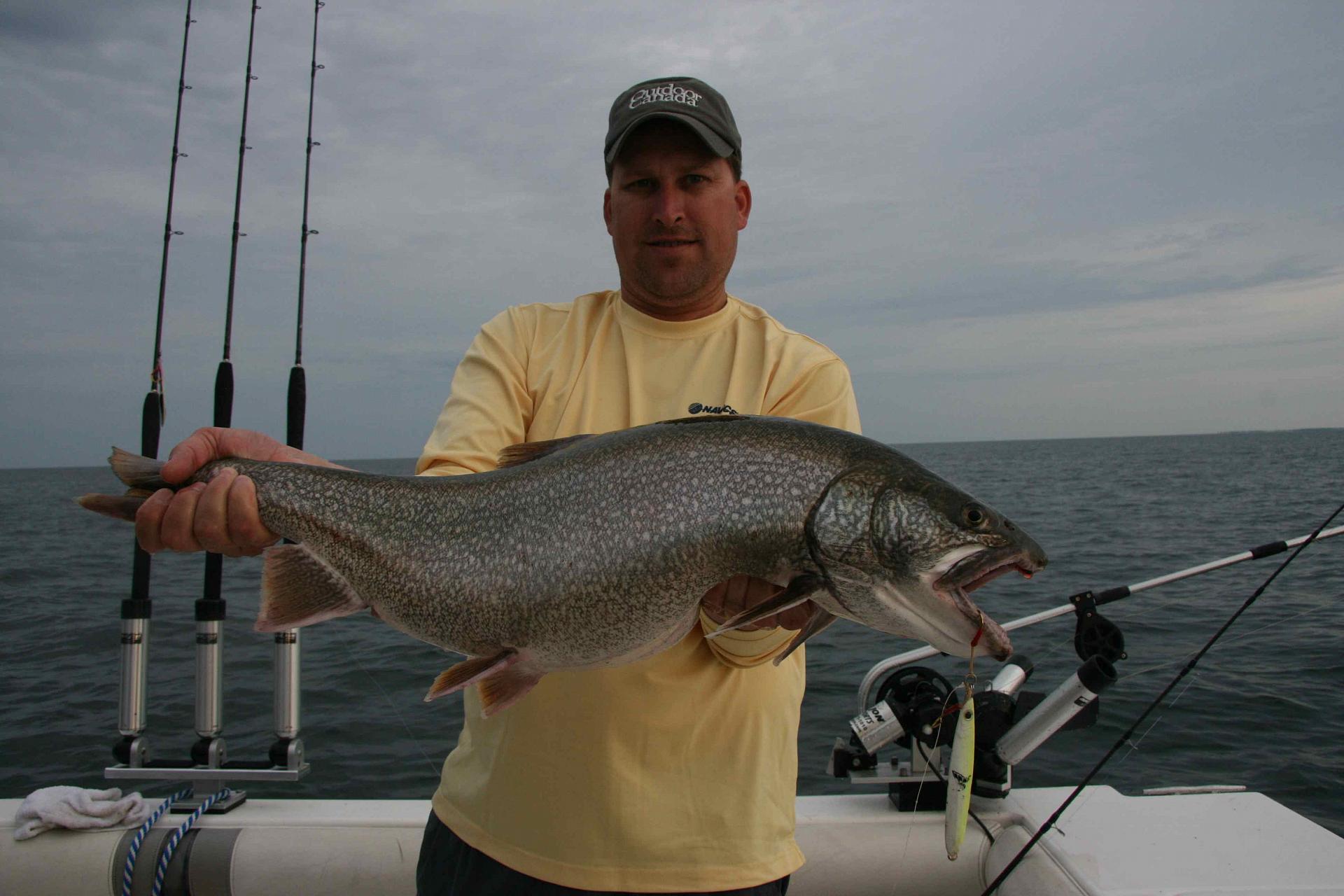 The jig is up: Navionics' Chris Gatley and a 15-pound lake trout that fell for his Shimano Butterfly jig in 140 feet of water
FishingFishing Tips & Tactics

I’m back in the saddle here in the office for a few days before heading south for the family vacation in Sea Isle City, New Jersey (here I come, summer flounder!). Yesterday, I should have been jigging for king salmon, browns and/or lakers down in the southeast end of Lake Ontario, but the weather (six-foot rollers, anyone?) scuppered those plans.

Instead, the Outdoor Canada contingent of managing editor Bob Sexton, art director Sandra Cheung and myself ended our New York State fishing foray Tuesday morning after a few hours of jigging for lake trout. As with Monday, we were fishing with Navionics guru Chris Gatley aboard Good Times III, captained by the gentlemanly George Haskins. Originally, we had planned to jig for the browns in Mexico Bay, but the calm weather drew us to laker country much farther from port.

The water was flat when we took off from Port Ontario at sunrise (see photo above), and it remained calm for a couple of hours once we reached our destination: a gently-sloping shelf about 140 feet down, just off Stony Point. There, just south of the St. Lawrence River inflow and the Canadian border, the lake trout were literally stacked up. Incidentally, we were just south of Gallo Island and Calf Island, where Bay of Quinte’s giant walleye spend their summers.

The game that morning before an incoming storm chased us back to port was dropping 75- to 110-gram Shimano Butterfly and StinG-0 jigs down to the bottom, then jigging them up, dropping them again and repeating (we’ll be covering this technique in greater depth in an upcoming issue of Outdoor Canada magazine). Chris has had great success with Butterfly jigging on Ontario’s football browns and king salmon, so we figured it would be a no-brainer on the lakers.

Indeed, we weren’t long on the deep, rock-bottomed flat before Chris nailed a beauty 15-pounder (see photo below). Interestingly, we’d just finished reading an article about the spot on Navionics cool NewsStand feature, whereby you can upload articles from icons on the very maps you are viewing. Pretty neat stuff. Unfortunately, the Doppler revealed an ugly system rolling in and we had to cut the morning short. No mind: I got a great introduction to the Butterfly jigging technique and I plan to add it to my repertoire.

Thanks once again to Chris Gatley and Captains George Haskins and Nick Lee from Good Times Sportfishing for putting us on the fish—and for the great, on-the-water company.