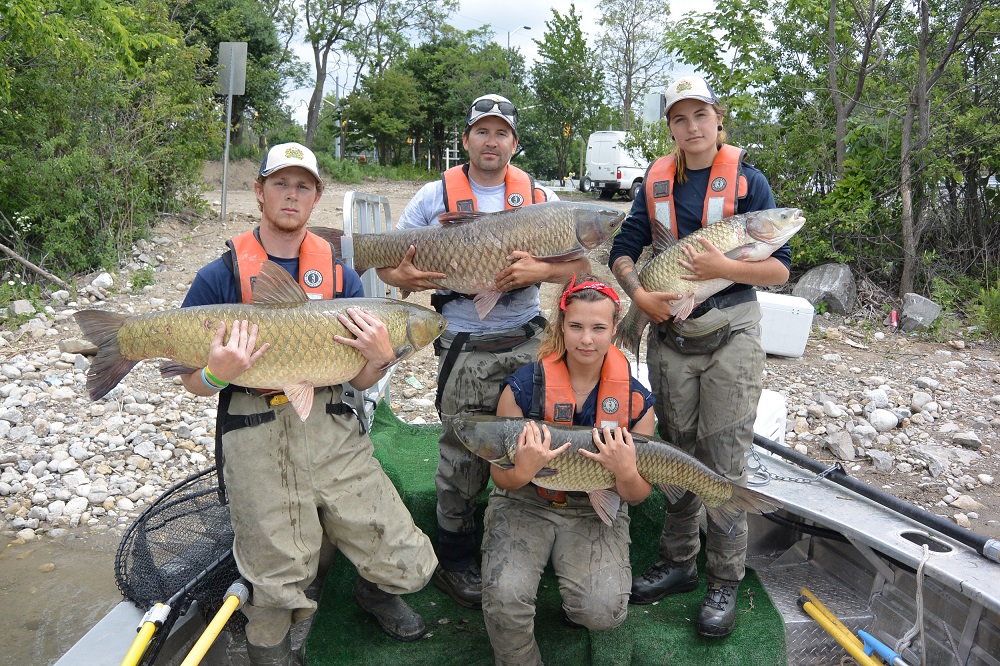 Canadian anglers need to be extra vigilant about invasive grass carp. Here’s why

ON HIGH ALERT FOR GRASS CARP

If you fish around the Great Lakes you need to be on high alert. Even if you spend most of your time fishing on inland waters, like Lake Simcoe or one of the Kawartha or Muskoka Lakes, you can’t let down your guard. As a matter of fact, you can’t get too comfortable anywhere across Canada—on Lake Winnipeg in Manitoba or Last Mountain Lake in Saskatchewan—even if the Great Lakes are ground zero today. There is a clear and present danger to these lakes—lakes that support a thriving fishing industry worth more than $7 billion a year and more than 75,000 jobs.

Indeed, imagine what would happen if hard times fell on the finest smallmouth bass fishing in the world which, today, is found in the eastern end of Lake Ontario and the St. Lawrence River. Or if the walleye fishery in Lake Erie—where the population today is an incredible 116 million fish—suddenly hiccupped.

Lake Huron’s mighty Georgian Bay, on the other hand, is favoured by many muskie aficionados as the most likely spot to produce a new world record fish, while Lake Superior’s lake trout population is arguably the finest on the planet. What would you do if they didn’t exist or were so diminished they weren’t worth fishing?

The menace is grass carp, and these animals have finally reached our door step. Fact of the matter is, they may already be here in small numbers. But the biologists and fisheries managers that are trying to stop the spread of invasive species need your help to gain further insight, information, data and assistance. Because anglers are on the water daily, we’re the perfect conscripts to help squash the potential grass carp assault.

I met up recently with Rebecca D’Orazio, who is the Aquatic Invasive Species Specialist with the INVASIVE SPECIES CENTRE in Sault Ste. Marie, Ontario, and let me tell you, I got an eye opener.

It started when I casually mentioned that, like many anglers, I had seen the videos and images of giant carp leaping out of the water and hitting folks in boats as they cruised the waters to the south of us. Rebecca immediately corrected me, saying that these are silver carp, not the grass ones.

“There are four different Asian carp species,” D’Orazio said. “Bighead carp, silver carp, grass carp and black carp. All four were brought into the United States in the early 1960s for biological control. But they escaped, spread throughout the southern and central states, and are now threatening to invade the Great Lakes.

“A lot of people hear the term ‘Asian carp’ and think it’s one fish—specifically, the one that jumps out of the water. In fact, that is the silver carp, one of the four different species. Although we lump them together under one name, they’re very different and have very different impacts.”

According to D’Orazio, grass carp were originally brought into the United States to eat weeds and the damned things are good at it. Some of the biggest industrial chicken and pig farms in the world stocked their holding and wastewater ponds with grass carp to control the growth of vegetation. Folks who own private fish ponds and small lakes did the same thing. But when the southern Mississippi River area flooded, the rising waters allowed the carp to escape and flourish in the wild. And over the last 50 years they’ve made their way steadily northward towards the Great Lakes.

“They’re close to Canadian waters right now,” D’Orazio said. “Just recently, grass carp were discovered to be naturally reproducing in two tributaries of Lake Erie on the American side of the lake.  That’s why they are the most immediate threat of the four Asian carp species to Canadian Great Lakes waters.”

Listening to D’Orazio talk about grass carp, impressed upon me the fact that she never used the term “weeds”, referring instead to “aquatic vegetation.”  It is something, as an angler, that I’ve tried to do—with much less success. Fact of the matter is, I love weeds, er, aquatic vegetation.  Vegetation is essential for fish like northern pike and muskies to spawn successfully, and establish strong year classes. And it provides crucial cover at some time of the year, for almost every species of sport fish. But grass carp can wipe vegetation out fast.

“It is definitely true,” says D’Orazio. “All four species have the ability to outcompete native fish for food and resources. They’re excellent invaders. They grow very large, very quickly. Grass carp can reach sizes of over four feet (1 metre) in length and over 90 pounds (45 kilograms) in weight. That allows them to outgrow the gape (mouth) size of many native predators, so they aren’t able to control the populations.”

Wow/ Understand what she is saying? Because of their voracious appetite, rapid growth rate, big body shape and tremendous ultimate growth potential, grass carp have the ability to quickly reach a size that is too big for even a muskie or northern pike to attack and swallow. So these highly prolific, vegetation-eating pariahs could quickly dominate the scene.

“They have huge appetites,” says D’Orazio. “Grass carp eat up to 40-percent of their bodyweight daily in aquatic plants. That’s like an adult human eating 40 large pizzas every day.  Studies estimate that just 10 grass carp per hectare would reduce wetland vegetation by 50 per cent. In many of the waters in the Mississippi River Basin, they now represent almost the entire biomass of fish.”

In Part 2 of my exclusive interview with Rebecca D’Orazio, we’ll look at the possibility of grass carp continuing their advance and becoming established in inland lakes across the country — spoiler alert, it is possible — how you can identify them, and what you can do to help stop the spread.